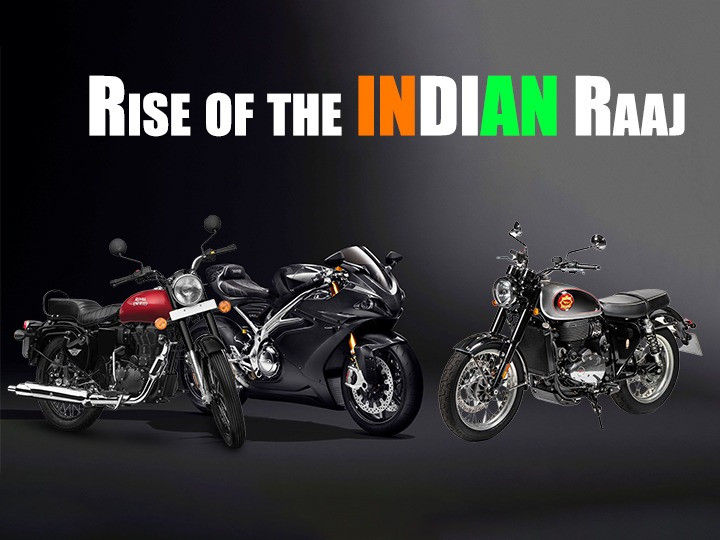 While we received Independence in 1947, India as a nation started functioning from 1950 when our constitution came into effect. In the past seven decades our country has made some tremendous growth be it the manufacturing sector, software services, agriculture and many more. But, among these, one sector has had a significant impact and that’s the automotive sector especially after liberalization. However, the two-wheeler manufacturers have had an even more influence as they provided personal mobility to millions of Indians.

What’s more impressive is that even the oldest names from the Indian two-wheeler industry are pretty young when compared to their Japanese and European rivals, and despite this they have made tremendous growth. Such has been their rise that Indian brands now own most of the iconic British marquees, quite an irony, right? Not really--while Indian brands worked hard, utlised the expertise of Japanese brands to improve tech, innovated and found solutions to address the needs of their market, British brands focused on nostalgia and tradition, which in turn became their bane instead of the boon they had expected. On this Republic Day let’s take a look at the British marquees that have been acquired by Indian two-wheeler giants and how they are scripting their revival.

The oldest two-wheeler brand in continuous production has a rather eventful past, but we shall focus on its India journey. From patrolling our borders to ruling our streets it has been quite a rollercoaster ride for Royal Enfield. The RE Bullet was among the first bikes to be built in India when assembly for the motorcycle commenced in 1955. In 1994 it was acquired by the Eicher Group but it seemed that the company might fold up as it entered the new millennium. However, the brand wasn’t ready yet to lay down its arms: the company launched the Classic 350 and the rest is history.

In the past two decades Royal Enfield has made tremendous growth not only in India, but globally as well. In fact, after Triumph, Royal Enfield could be the most popular British brand across the globe and has plans to expand its foothold in the international two-wheeler space. Royal Enfield’s turnaround journey is the stuff of legends and shows how an Indian company can not only revive and nurture a brand, but make it globally successful and relevant.

Another iconic British brand which is under Indian ownership is ‘The Birmingham Small Arms Company Limited’ or more popularly known as BSA. It was acquired by automotive giant, Mahindra and Mahindra Ltd in 2016 for around Rs 28 crore. At that time, BSA as a brand barely existed, a far cry from its glorious past when it was the largest two-wheeler manufacturer in the world. Classic Legends (subsidiary of Mahindra and the company that owns BSA) announced that they plan to resurrect BSA with a brand new motorcycle.

Development time got extended due to the Covid-19 pandemic, the BSA Gold Star was resurrected in a modern avatar and the bike was unveiled last year. The modern BSA Gold Star has been well-received by international media and showcases how an Indian brand can revive an iconic motorcycle without interfering with its ethos and DNA. Mahindra might also set up a new manufacturing plant in the UK, which will act as a base for European and American markets.

Norton is the latest legendary British marquee to be bought by an Indian brand. Unlike BSA, the transition and acquisition wasn’t an easy one for TVS Motor. Former Norton Motorcycles director and owner Stuart Garner had left the brand, employees and owners in a lurch. The task on hand for TVS was a daunting one but the Indian giant handled the situation brilliantly by first delivering the pending orders, assuring the workforce of job safety and then moving production to a new facility at Solihull.

With the investment of Rs 153 crore from TVS, the British brand has finally found some much needed stability. The current focus of TVS is to keep manufacturing ultra premium Norton bikes which are niche, but there is demand. Norton executives have mentioned that they want to follow Ducati’s footsteps of transforming from a niche brand to an aspirational, yet somewhat affordable bikemaker. This means we can see more affordable Nortons in the near future and this is where TVS can help with its expertise of low cost and high quality manufacturing, something that BMW Motorrad knows a thing or two about.

Agreed, Bajaj hasn’t acquired the British brand, but what it offers to Triumph Motorcycles is a wider audience and newer markets by building a new range of low capacity and affordable bikes. What’s more interesting is the fact that Bajaj was the reason Triumph had ditched its plans to build small capacity motorcycles in the first place! Intrigued? So back in 2013 Triumph’s 250cc test mules were spotted in Europe and the bikes were supposed to be manufactured in India. However, in 2015 Triumph announced that it has ‘put on hold’ the 250cc programme. While there was no official reasoning for the project to be shelved, it’s believed that the made-in-India KTM 390 Duke with its superior specs and cut-throat pricing sounded the death knell of the Triumph 250cc bike.

Coming back to the partnership, both the bikemakers signed the deal in 2017 to develop a new range of Triumph motorcycles ranging from 250 to 750cc. The pandemic has paid spoilsport and the launch of the first bike has been pushed to 2023. While Triumph will develop and design the bike, Bajaj will handle the manufacturing end and will set up an exclusive line for these bikes in Chakan, Maharashtra. Bajaj has proven that it can build world class motorcycles at a cutthroat pricing with KTM, and Triumph is banking on this aspect.

As you would have understood that all the Indian manufacturers have taken a different approach with their respective brands. But one thread that is common among all is the focus on revival and enhancement of the product and the brand without altering its DNA. We wish the Indian two-wheeler giants more success, and hope that the Indian Raj of two-wheeler domination spreads its wings in more global markets in the future.