Kartik might’ve taken a Classic up to its spiritual home in the Himalayas but our long-termer went somewhere it just fits in even more perfectly: Goa 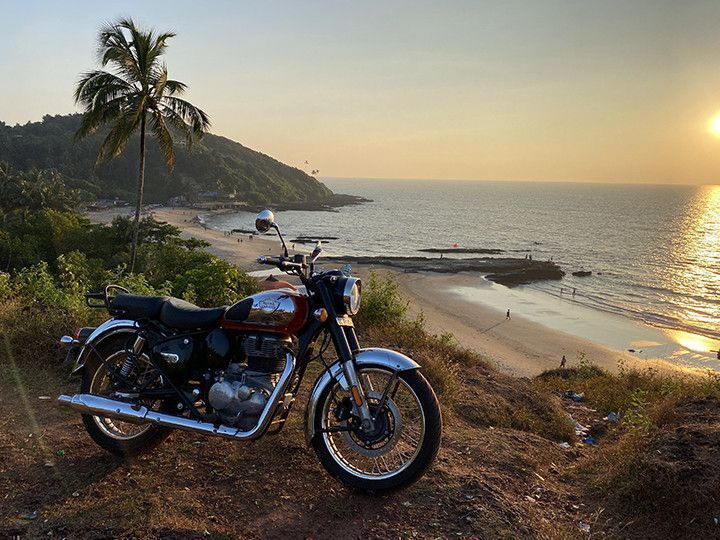 Pre-ride jitters, I always get them. Especially when I have a long day of munching miles ahead of me. And what made them even more prominent on my last ride was that for the first time in my life, I wasn’t riding solo to Goa. Luckily, I had our long-term Royal Enfield Classic 350 at my disposal and it had a few GMAs onboard to make my road trip a breeze. But that’s just the last 1000km of the 7400km it has managed to clock so far. Here’s how it has been living with the Classic 350, how the boys have enjoyed it and what exactly went wrong on my Goa trip.

Tracking duties
By the time we finished testing and comparing the Classic 350 to the CB350 RS, which you might’ve seen on YouTube or read on our site, we had already covered more than 1500km. Yep, not only were we amongst the first to get the bike, we think it might have been the first new Classic 350 to also get serviced. That should be an award or something for it on the internet, right?

Nevertheless, the Classic 350 has obviously been part of many shoots, acting as the tracking vehicle for our cameramen when we are shooting our city bits for video. The DoPs particularly love the Classic for its fantastic ride quality and well padded seats. Unlike them grumbling a bit on the Meteor, the Classic’s ability to flatten any small bump or hump allows them to take seamless imagery of the vehicle being reviewed on the day.

Praises All Around
It is not only the bike boys that have fallen head over heels for the Classic, most of our production crew and even the car guys seem to have been smitten by the bike. A lot of our team members have borrowed the bike for a couple of days, primarily for commutes but also a few of them taking it on weekend trips to Alibaug, Goa and other such touristy places.

For instance, Arun, Amar and a friend of theirs wanted to spend a long weekend eating the fresh prawns of Alibaug all day. The only way the two of them could convince their friend to join them as a pillion would be to take the Classic as there was no way he was going to sit behind on the Interceptor that we recently got to test the Indimotard Greasehouse exhausts.

The Trip
Like I mentioned at the start, the Classic 350 was going to take me and my pillion on our first long-distance ride. I have done numerous solo Pune-Goa trips, so I am quite familiar with what route to take and what to expect on the journey. I was also familiar with how nervy and panicky my partner usually gets when going around simple bends within city limits. She starts getting fidgety at the slightest hints of lean. And if it is a fast bike, or one that just sounds fast, she gets all worried too. The Classic 350, in this case, was the perfect soothing tea that she, and I, needed for this journey. One that we could both sit in comfort and peace, listening to tunes, and marvel at the surroundings.

We left on a chilly winter morning from Pune, around about the time as daylight broke. Usually, Pune to Kolhapur is done without any long breaks, with just a little stretch at Satara to loosen up stiff muscles. When I stopped to do the same at Satara, my pillion felt fine and hopped back on the bike instantly, telling me that she didn’t want to take a break so soon and was fine with soldiering on. I was pleasantly surprised and at the usual Kolhapur McDonalds (those who do the trip know this one), she confessed that she too was surprised how easy the journey was so far.

I knew the real test was the journey after Nippani: the Amboli ghat.

What Went Wrong
The state of roads from Ajara to halfway down Amboli ghat were pitiful. Broken tarmac and loose gravel meant I couldn’t maintain a smooth rhythm. There were times when dodging around a pothole wasn’t quite possible. I had no option but to put the bike through the ditch and hope I don’t get a whack on my helmet from my partner. But nothing. Flat. The Classic just wafts over everything.

Keep the pace in check and the suspension just absorbs every obstacle. And just in case I took a bump a bit too spiritedly, the rear didn’t toss me and my pillion off the seat as much. Even the suspension oscillation was in check. It took a moment to regain composure but I never found it to be wallowy.

My only grouse was the brakes. Though they are miles better than the ones on the older bike, the lack of initial bite and lever feel is a bit disheartening. The stopping was always predictable but it sure could have been better. I found myself stamping the rear brake pedal a bit more ferociously than what I would have liked and as a result, managed to slip the rubber shoe off the lever on one such occasion. That’s the only thing that went wrong.

Beach Beauty
On the breezy, casual, narrow streets of Goa, the Classic purred nicely. I wanted relaxation and chill time at the beach and the Classic was a perfect companion to get me there. And what’s better is that it looked cool, soaking in the sunset.

We even swung by the Royal Enfield Garage Cafe for brunch on our final day. I wanted to have the bike washed, the chain cleaned and lubed and perhaps even find a replacement for the rubber shoe. The former two items were carried out as I mashed on some ‘Hoppel Poppel’ (a must have in my opinion) and a signature blend of cold brew Americano coffee.

The trip went by in a blur and the memories were made all the more richer with the Classic being in them. Now that it has lived its life being passed around the office, Kartik has pulled rank and wants to keep the bike with himself for the foreseeable future. I guess, he’s still not yet recovered from the Himalayan high and rightly so, cause this is a bike that I would definitely want to have in my garage. And my girlfriend wouldn’t mind it either.