The Royal Enfield Classic 650 seems to be the perfect direction for the iconic Classic family, and here, we explain why 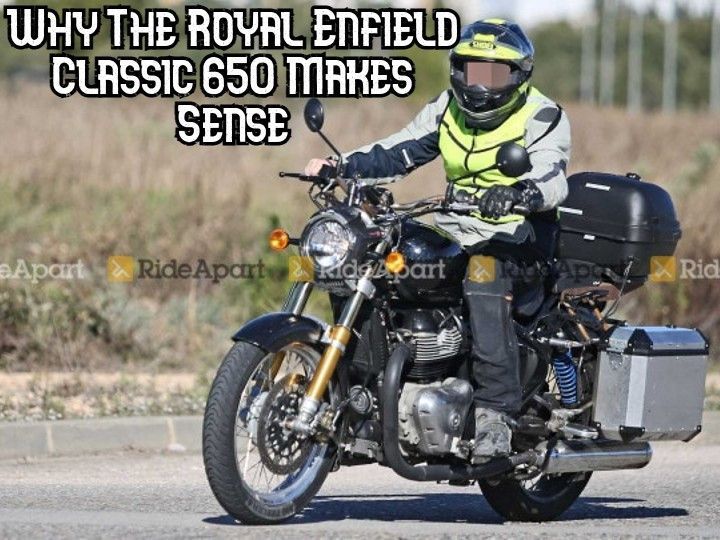 A new motorcycle based on the versatile 650cc platform was recently spotted testing abroad. Our analysis indicates it could be the Royal Enfield Classic 650. This seems to be just the right step forward for the highly-popular Classic lineup, and we explain why:

Much better brand appeal than the Royal Enfield Interceptor 650:

Royal Enfield’s ‘Classic’ name has several years of eventful history behind it. Before the launch of the Classic series, Royal Enfield was struggling to cope with modern motorcycles that started populating the Indian two-wheeler market. After all, the Classic 350 and the Classic 500 were Royal Enfield’s acts of redemption, pulling the ageing company out of its impending doom and catapulting it to the status of becoming one of the most revered bikemakers in the 350cc-500cc segment, not only in India but also in several countries abroad.

Sure, the ‘Interceptor’ name is also etched in history, dating back to the 1960s. However, it wasn’t exactly a product that was a pivoting point in the company’s lifetime. Taking these factors into account, it makes sense that the next step for the Classic sub-brand is to graduate to the 650cc segment. Moreover, the Classic range has made a name for itself for being the only popular vintage-theme motorcycle with enough modern bits to make it a two-wheeled art of nostalgia. Enthusiasts and laymen will also instantly connect with a ‘Classic’-style motorcycle if Royal Enfield launches a 650cc version of it.

A comfortable, easy-going bike with enough grunt when needed:

The Royal Enfield Interceptor 650’s heart is potent enough to do high-speed highway riding. However, its ergonomics aren’t really suited for effortless mile-munching. The Royal Enfield Classic 650 can fix this as it has a single-piece seat, easy-to-reach handlebars, and mid-set footpegs to ensure an upright, comfy riding stance.

Riding the Royal Enfield Classic 350 made us feel the need for a little more oomph. The Classic 500 had the grunt, but it was a little out of date in this era of refined, modern motorcycles complying with stringent emission norms. The kind of leap Royal Enfield made from the 346cc UCE engine to the J-platform 348cc counterbalanced unit is significant, and it might not be possible to replicate the same in the 500cc platform. But the 650cc platform makes perfect sense to be the spiritual successor to the Classic 500.

Summing up, the Royal Enfield Classic 650 will be a more retro take on the Interceptor 650, designed to appeal to a much wider audience. In a way, it would be just like what the Triumph Bonneville T100 is to the Triumph Street Twin. Royal Enfield could launch the motorcycle in the middle of 2023, likely at Rs 2.95 lakh (ex-showroom).