How Different Are The Street Triple’s R And RS Trims? 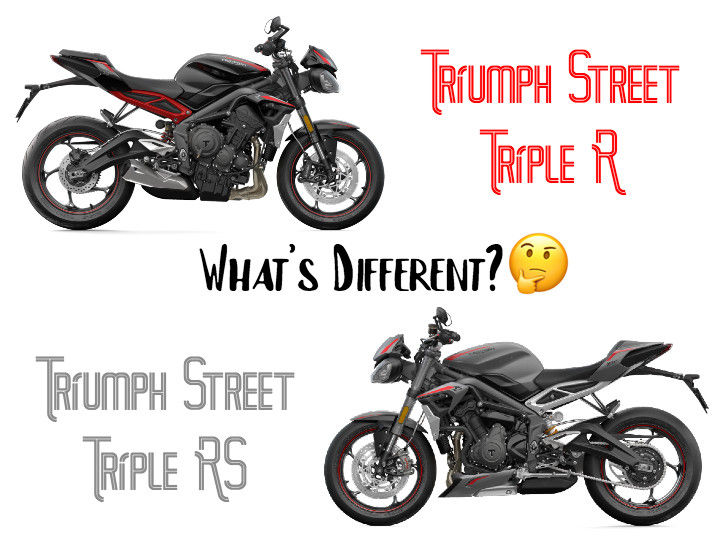 Triumph has been quite active in rolling out not only BS6 updates of its existing products but also new bikes. The Tiger 900 was the latest new Brit bike to ride into the country and the Bonneville Black editions were launched for the first time in India. The next, and what seems will be the last, launch for the year is the Street Triple R, the new entry-level Street Triple. Triumph has skipped the S trim for India (head here to know why). So, what are the differences between the R and the RS versions?

Dated Console Returns
Triumph has employed a few cost-cutting measures on the 2020 Triple R with the model no longer getting the colour TFT dash that you find on the Triple RS. Instead, it has to make do with the old semi-digital LCD dash that has been around since its 675 days. In fact, the Triple R will become one of the very few nakeds available in the country to skimp on a TFT dash -- a feature that is pretty much standard for 2020 models.

More Power Than The Old S But RS Still Rules
The 765cc triple heart is shared between the two 2020 models. The one on the Triple R puts out 118PS and 77Nm. Compared to the old S that was sold earlier, it has 5PS and 4Nm more on tap. Suddenly, the gap to the range-topping RS isn’t that much with the R making just 5PS and 2Nm less.

R Isn’t As Tech Savvy As The RS
The electronic suite on the R model isn’t quite feature rich. It gets ride-by-wire, three riding modes (Rain, Road and Sport), switchable traction control and ABS. The latest addition to the 2020 model is a bi-directional quickshifter, which you also find on the Triple RS. What you are missing out on is extra riding modes -- Rider and Track -- with dedicated levels of traction control and ABS intervention.

Sharpest Tool In Triumph's Shed
Yes, it is true. After the updates for 2020, the supremely capable twin-spar beam frame has the sharpest rake angle between the two bikes: 23.5-degree to the RS's 23.9-degree. The old Triple S didn't quite live up to the reputation, somehow not possessing the great handling characteristics as the superior RS. With the new R, the feeling is going to be a lot closer to the RS and perhaps in some ways better.

On both bikes, you will find fully-adjustable suspension units. While the 41mm Showa SF-BPF unit is the same on both trims, the R has to make do with a Showa monoshock. The more advanced RS model gets an Ohlins STX40 monoshock with a piggyback reservoir.

While Triumph has sourced the braking hardware for both models from Brembo, the R gets the M4.32 series of monobloc calipers and the RS gets the higher-spec M50 monobloc calipers. Plus, the RS gets Brembo’s radial master-cylinder and MCS span and ratio adjustable levers, all of which make it a phenomenal stopper.

Lastly, Pirelli provides the rubber for both models. Given the racy intentions of the Triple RS, it comes shod with the super grippy Supercorsa v3 rubber, making it the first bike in the world to get these new tyres. The Triple R gets slightly less grippy but more versatile Diablo Rosso 3s, which could prove to be the better option for our road conditions.

Pricing
Triumph delivered a few extra goodies on the 2020 Triple RS but is not charging any extra moolah for the bike, pricing it at Rs 11.13 lakh. We expect the Triple R to carry a price tag of around Rs 9.75 lakh, which would be just about Rs 65,000 more than the old Triple S. The price gap between the two bike would be around Rs 1.35 lakh, which is about the same buffer between the pricing of the models in UK. This pricing could work wonders for those who longed for the same phenomenal handling as the RS but couldn't quite afford spending that extra money to get one. With the R, there is almost similar levels of performance, sophistication and goodies that we have experienced on the RS. Plus, the Triple R trumps over the its competition in hardware offered, which at the expected price would be mind blowing. Wish Triumph had just stuck around with the TFT dash.