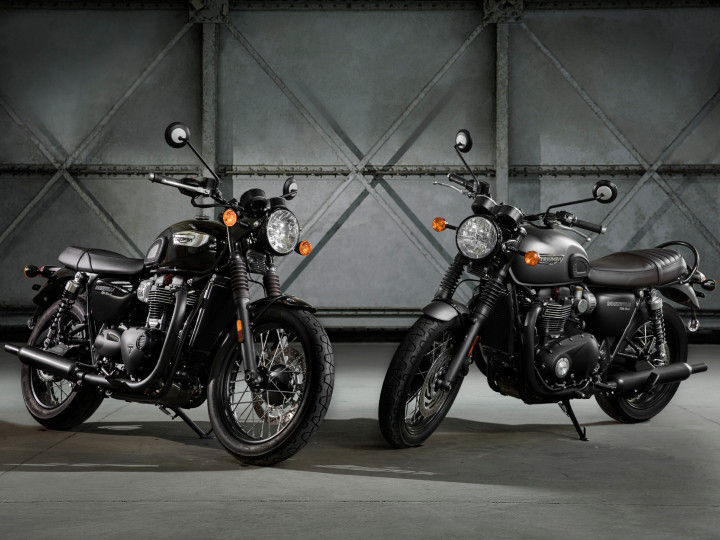 After price announcement: Triumph India has finally ridden the Bonneville T100 Black and the Bonneville T120 Black with the bikes carrying a price tag of Rs 8,87,400 and Rs 9,97,600 (ex-showroom India). The Black edition models are priced the same as their normal colours counterparts. Bookings for the bikes have begun and deliveries are expected to start soon enough.

These are the first Black edition Triumph motorcycles to head our way. The British bike maker has shied away from bringing these editions to India earlier. As the name suggests, the Black editions are heavily doused in dark colours, with blacked out elements arriving in place of chrome- or metal-finished bits. The only non-black items that you will spot on them are the throttle body covers, wire spokes, rear twin shocks, twin-pod console's bezels and the distinctive old-school 3D Triumph logo. These Black editions are not to be mistaken for the black colour option as that will continue to be offered, but with shiny surface finish bits.

Triumph had updated a few popular Bonnie models, these two being part of them, to BS6 norms right at the start of the year. Despite being cleaner than earlier, both the 900 HT and 1200 HT engines used on these bikes have not lost out on performance, which is a great thing. The T100’s 900cc parallel-twin motor puts out 55PS and 76.73Nm while the larger T120’s 1200cc engine produces 80PS and 105Nm.

Mechanically as well, the two motorcycles use similar components. Both get the traditional double cradle frame that is suspended by a telescopic fork and twin shocks. The 18-/17-inch wire spoke wheels come wrapped up in Pirelli Phantom Sportscomp rubber. The braking components used are also identical. While you only get a single disc at the front on the T100, the hardware used -- a 310mm rotor and twin-piston Nissin floating caliper -- is the same as the twin-disc setup on the T120. Both bikes also use the same 255mm disc and twin-piston Nissin floating caliper at the rear.