BREAKING: The Gloves Are Off With 2023 Triumph Street Triple Range 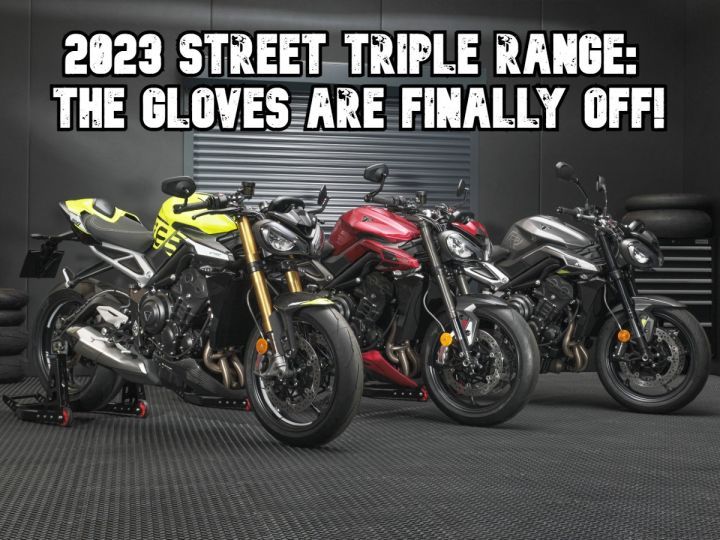 The Triumph Street Triple range received its fair share of updates back in 2020 but things have been rather silent for the last couple of years. But now, Triumph has gone all guns blazing with the unveiling of the 2023 Street Triple range that includes the base R variant, the sportier RS, and the most extreme Moto2 Edition. Here are the highlights:

Years of Moto2 learnings have finally made their way onto a road bike with the new Street Triple Moto2 limited edition. We’d have loved to see the Daytona 765 but Triumph has gone with a different approach with the Moto2 Edition, bringing it closer to the race bike with clip-on handlebars and a whole bunch of updates. Triumph has taken the 765 motor and turned it up to the max, with more power and a wider torque spread. As a result, it churns out 130PS at 12,000rpm and 80Nm at 9,500rpm, making it the most powerful bike in its segment, with just 10PS less than the race machines.

The variant also features a set of aggressive clip-on handlebars that are 80mm lower and 50mm forward to ensure proper race-bike-like ergonomics. Furthermore, it comes with top-shelf Ohlins NIX30 fork / Ohlins STX40 monoshock - both fully adjustable, paired to premium Brembo Stylema calipers (with twin 310mm discs) up front and a Brembo caliper (with a 220mm disc) at the rear. To top it off, it is also draped in carbonfibre highlights on the bodywork too. The Moto2 Edition comes in two colour schemes: Triumph Racing Yellow and Crystal White, each limited to only 765 units. Sadly, this variant will not be launched in India.

The Street Triple RS also shares the same engine tune as the Moto2 Edition, so you get access to all of that segment-leading 130PS and 80Nm. With these output figures, the 2023 iteration is 7PS more powerful and 1Nm torquier than its predecessor. Geeks will appreciate the fact that the engine internals have been heavily updated with a new higher flow inlet port, 4.7 percent increase in the compression ratio, new pistons, optimised combustion chamber, new conrod, valves and high-lift camshaft, revised gear ratios, and a new single cat-con, lighter exhaust system.

The Street Triple RS is well-known for its engaging handling dynamics and taking it even further, Triumph has sharpened the rake angle and raised the backend for even sharper handling. Sadly, this has resulted in a 11mm increase in seat height, to 836mm. Oh, and the fuel tank capacity has also gone down from 17.4 litres to 15 litres across all the variants.

Underpinnings have remained unchanged, with the 41mm Showa Big Piston Fork and Ohlins STX40 monoshock, fully adjustable at both ends; and the same Brembo braking setup as the Moto2 Edition. All in all, the updated powertrain goes perfectly hand-in-glove with the tweaked chassis, making it the most performance-packed streetfighter in its segment ever.

Even though it is the ‘base’ variant, Triumph has still managed to eke out 2PS more than its predecessor, at 120PS. The peak torque has also been increased by 1Nm to 80Nm, and this variant comes with four riding modes (Road, Rain, Sport and Rider configurable), updated cornering ABS and traction control. Underpinnings have remained unchanged, but while the international-spec bike gets the Continental ContiRoad tyres, we’re yet to see if the India-spec one will get the same or if Triumph equips the bike with Pirelli Diablo Rosso 2 shoes.

The semi-digital instrument cluster has been updated with LCD-TFT combo unit, similar to the Triumph Trident 660. Another notable tweak in all the three variants include an updated bodywork with redesigned headlight nacelle.

Triumph’s aim was to bring its street bikes as close to Moto2 levels and with all these updates, we can confidently say the brand has achieved it. The Street Triple was already one of the best performing motorcycles out there in its segment, and these updates should make it even more engaging to ride.

How do these updates translate to the real world? Well, we’ll get the answer when Triumph brings the bike to the Indian market, which could happen sometime around March 2023. While the R variant could be priced at Rs 9.40 lakh, the RS could set you back by around Rs 11.70 lakh. For perspective, the current-gen R model is priced at Rs 9.15 lakh whereas the RS costs Rs 11.35 lakh (all ex-showroom India). Once launched, the 2023 Street Triple range will go up against the Ducati Monster, Kawasaki Z900, and the BMW F 900 R in India.