Trademark for the name has been applied, pending further examination by the trademark office 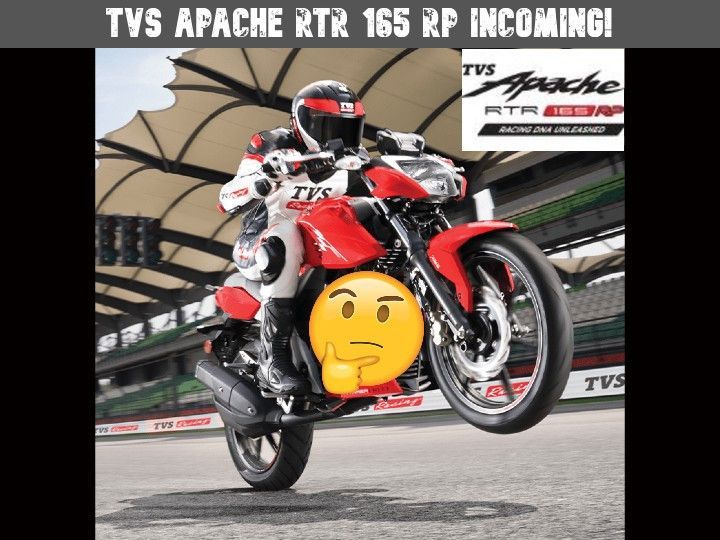 TVS has filed the trademark for the names ‘TVS Apache RTR 165 RP’ and ‘TVS RP Race Performance’. Both were filed on August 16 this year, and are pending further examination by the trademark office. Here’s what we think it should be about:

A Sportier Variant Of The Apache RTR 160 4V

The 2021 iteration of the TVS Apache RTR 160 4V is already the most powerful motorcycle in its segment. TVS might just make it even better by introducing a sportier variant, called the TVS Apache RTR 165 RP. TVS could rebore the 4-valve 159.7cc single-cylinder air-cooled, fuel-injected motor for a slightly higher displacement. This heart could produce 1-1.5PS, and around 1Nm more than the existing tune, which makes 17.63PS and 14.73Nm. Expect a higher rev ceiling, and a brisker throttle response as well.

TVS may also bless the motorcycle with slightly more aggressive ergonomics, just like the Race Kit in the 2021 TVS Apache RR 310. The handlebars may be a little lower, and the footpegs a tad more rear-set. The riding stance may not be aggressive enough to be unusable on a daily basis, but just enough to make it a better handler around corners. The TVS Remora tyres are already grippy, so complementing this could be a proper dual-channel ABS with the capability of switching the rear unit off. It may also get a preload-adjustable telescopic fork a la the TVS Apache RTR 200 4V. These additions should make the RTR 165 RP by far the sportiest naked in its segment.

Since TVS has filed a trademark for the ‘TVS RP Race Performance’ name, it could be that the Hosur-based manufacturer will offer the upcoming RTR 165 RP under this name, as a separate sub-brand. This would be just like how BMW and Mercedes-Benz have dedicated performance sub-brands called ‘BMW M’ and ‘Mercedes-AMG’ respectively. Nevertheless, since TVS has just filed the trademark for the motorcycle, we reckon its launch is quite some time away. Expect TVS to introduce the motorcycle earliest by the middle of next year.