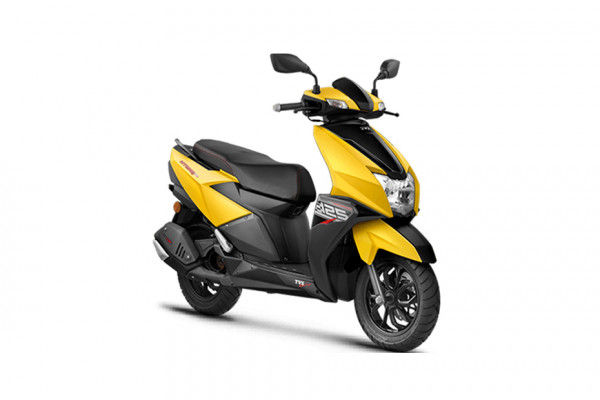 The TVS Ntorq 125 is the most powerful scooter in the brand’s lineup and among the sportiest scooters on sale in India. It recently received a BS6 update where, despite being kinder to mother earth, TVS engineers managed to maintain its power output. The TVS Ntorq 125 BS6 is priced at Rs 65,975 (ex-showroom).

As we mentioned before, power output has remained identical to the older scooter despite getting the BS6 treatment. The fuel-injected 124.8cc single-cylinder engine produces 9.38PS and 10.5Nm. While the peak torque arrives at the same 5500rpm as before, the peak power comes in at 500rpm earlier (at 7000rpm). Underpinnings of the Ntorq 125 have also been carried forward, but the new TVS scooter is almost 2kg heavier than its predecessor. Also, the Ntorq 125 BS6 has a larger 5.8-litre fuel tank (up by 0.8 litres). Suspension hardware is the same as before and disc brake is an option while CBS is standard.

The Ntorq 125 BS6 is available in three variants: drum brake, disc brake and Race Edition. The base version retails for Rs Rs 65,975, while the front disc brake version carries a premium of Rs 400. The top-spec Race Edition carries a sticker price of Rs 72,455. All prices mentioned are ex-showroom, Delhi.

One of the main reasons for the popularity of the Ntorq 125, especially among the youth, is its snazzy and sporty styling. The BS6 Ntorq carries forward the same design as seen on the older scooter and the Race Edition features bolder graphics, hazard lights and an LED headlight.

The feature list also sees no change compared to the BS4 model, which is fine as the Ntorq is already among the most feature-loaded scooters on sale in India. It gets a multifunction LCD instrument cluster with Bluetooth and smartphone connectivity to track various parameters of the scooter using an app. Other notable features in both the scooters include turn-by-turn navigation, 22-litre underseat storage with USB charging port and boot light, external fuel filler cap, LED tail lamp, engine-kill switch, and pass-beam function.