How much further are the 160cc scooters pushing the envelope of performance from the 125cc class? 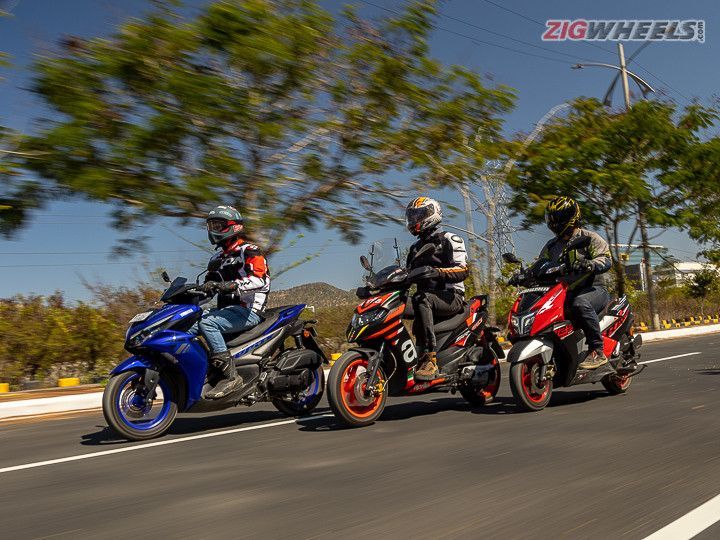 Performance scooters, maxi-scooters, adventure scooters… What was once a mundane mode of commute has now evolved into something that dares to blur the line between a motorcycle and a scooter. In that regard, the Aprilia SR160 was the most powerful Indian scooter in the market for quite some time, and amongst the priciest too. Last year, the Yamaha Aerox dethroned the Italian by not only being the most powerful scooter on sale here but also being the priciest, for a brief moment before the  BMW C 400 GT was imported from Bavaria. At almost Rs 1.30 lakh, these 160s are priced at par with some of the 200cc motorcycles. So, do they really justify the price tag or are you better off saving almost Rs 50,000 and get yourself the fastest 125cc scooter in India – the TVS NTorq 125 Race XP? Let’s find out:

Are They Really That Fast?

No surprises here. The Aerox’ liquid-cooled engine is far superior to that on the SR 160 Race and the NTorq 125 Race XP. But when you look at the Aprilia and NTorq’s engine, the performance difference isn’t much. Despite the 35cc advantage, the SR160 dishes out just 0.9PS and 0.8Nm more than the NTorq.

Of course, the Yamaha triumphs in acceleration. However, the bottom-end performance is poor, and the SR160 Race comes pretty close in the 0-40kmph sprint. But thanks to the VVA, the Aerox has a strong mid-range and once past that, the acceleration is relentless all the way up to a V-box-tested speed of 111kmph at our short testing strip. Given enough room, it went up to 120kmph on the dash. And it does that without breaking a sweat. That said, the visceral experience when going fast isn’t as exciting as that of the NTorq.

In the case of the Aprilia, the urgency is felt only between 40-70kmph. Aprilia claims to have retuned the CVT in the Race variant for better acceleration, but it feels very identical to the predecessor.

The TVS NTorq 125 Race XP isn’t as quick as the other two, but its intentions are clear. Its shorter throttle action means you pick up speed much quicker, and it goes all the way up to 95kmph without much drama. Furthermore, unlike the Aerox, the NTorq feels much more livelier even at speeds as low as 20kmph.

Surprisingly, the performance of these scooters doesn’t come at the cost of fuel efficiency. That said, other than having the advantage of a smaller engine, the Race XP also comes with a Street mode. This dials down the performance and smoothens the throttle response to boost efficiency.

Is The Handling Worlds Apart?

Yes, each of these scooters provide a completely different riding experience. And it all comes down to how each of these are built.

The Yamaha Aerox 155 almost feels like a motorcycle in the way it handles. The central spine allows you to grip the scooter with your legs, and the beefy 14-inch tyres offer unparalleled cornering confidence in this segment. However, the sweet handling of the Aerox is enjoyable only on smooth stretches of tarmac. The stiff rear suspension coupled with the hard seat is a nightmare on rough roads. But that’s not the only chink in its armour. While the engine and chassis urge you to push the Aerox to its (and your) limits, the poor braking performance won’t let you do so, at least on open roads.

This is where the SR 160 beats the Yamaha. It has better braking performance than the Aerox but thanks to the single-channel ABS unit, the Aprilia tends to lock up its rear quite easily under hard braking. The ride quality is on the stiffer side, and the suspension just doesn’t budge when confronted with sharp potholes. That said, the big 14-inch wheels make it a hoot around the twisties.

(Un)Surprisingly, the TVS NTorq 125 Race XP turns out to be a better package, and is more enthralling than the Aprilia and the Yamaha. The suspension is pliant to soak up anything that you throw in its way, yet it inspires confidence through the corners. The TVS Remora tyres offer enough grip for you to lean all the way till you scrape the belly (or the main stand, if you have one). And while the brake bite isn’t as sharp as you’d expect, it has decent feedback and progression.

Which One's The Headturner?

Hands down it has to be the Aerox. Its aggressive fascia, handsome proportions and funky colours demand a second look. The TVS NTorq has one of the most distinctive 125cc scooters in this market. The scooter is recognisable and distinctive with its design elements like the tail with faux exhaust vents, LED headlight and the wide variety of paint schemes. While the Aprilia’s refreshed design follows next, it isn’t drastically different from the older model.

Do They Compromise On What A Scooter Actually Needs To Be?

Scooters are meant to be practical, peppy machines to zip around the town, and in that sense, these scooters tick all the boxes, however, when you get into the finer details, you notice the problem.

The Yamaha Aerox’ spine houses the fuel tank, and while it helps in better mass centralisation, it leaves you with no floorboard. And though one might be okay with not being able to carry groceries on the floorboard (24.5-litre boot space FTW!), the available legroom is also limited. So, riders with wider feet may not feel as comfy.

The Japanese scooter has been equipped with a mobile charger, but instead of a Type-C unit, it gets an old-school DC charger, which leaves limited space for your phone in the cubby hole.

The SR 160 Race is riddled with similar issues. Its small floorboard offers limited legroom, and unlike the Aerox, it doesn’t have roomy underseat storage either.

And this is where the TVS leaves you impressed. It has decent legroom, good underseat storage and a bunch of features that’ll leave the other two sweating.

The console on the TVS NTorq Race XP is one of the most feature-packed ones in ICE scooters. From top speed, and 0-60kmph times to lap timer and even phone alerts, the LCD console packs it all. On the other hand, the Aerox has a very minimalist display. Lastly, it is the SR 160 Race. It does pack a lot of information, but some of it is just gimmicky, like the tachometer. However, the ambient temperature sensor on the Aprilia is helpful

The Rs 1.29 lakh price tag of the Aprilia SR 160 Race is baffling considering it doesn’t have the performance or the features to match the Aerox. Sure, the Italian scooter’s handling is its strong suit, but if that’s what you are after, the Aerox is a far better option.

The Japanese scooter has the looks, the performance and the handling that would keep you entertained for years. There isn’t much compromise on practicality or features either. So, if you (or your family) are hell-bent against motorcycles, the Aerox 155 is a great option that comes pretty close to a bike. That said, the Aerox is available only at Yamaha’s premium Blue Square dealerships, so availability is limited.

But is it really worth the Rs 47,000 extra over the NTorq 125 Race XP? Well, now that comes down to what you really intend to do with your scooter. If it is grocery runs, mixed with occasional spirited riding, the NTorq 125 Race XP fits the bill perfectly. It not just lures you with its performance, but has quite a lot of features to brag about too. No wonder then that it constantly ranks in the monthly top five selling scooters charts. 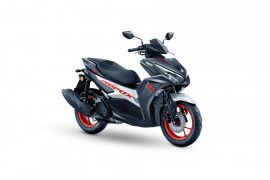 All Comparisons of Aerox 155