The 2021 TVS Apache RTR 200 4V with single-channel ABS has been launched in India, with all the bells and whistles of the dual-channel ABS variant. You get the exact ride modes, adjustable front suspension, and brake and clutch levers, all at Rs 1,28,020, Rs 5,050 less than the dual-channel variant. It’s available in three colours: Gloss Black, Pearl White, and Matte Blue.

Powering the Apache RTR 200 is a 197.7cc single-cylinder fuel-injected engine with oil cooler. It is mated to a five-speed transmission with a slip-and-assist clutch. Both variants come equipped with three riding modes: Sport, Urban and Rain. The motor churns out 20.82PS at 9000rpm and 17.25Nm at 7250rpm in Sport mode, and 17.32PS at 7800rpm and 16.51Nm at 5750rpm in Urban and Rain modes. The RTR 200 4V also features TVS’s Glide Through Traffic (GTT) feature, which helps build up revs and bumps up the torque for hassle-free low-speed movement. This can be done by just releasing the clutch and with no throttle input -- perfect for congested roads. The BS6 Apache RTR 200 4V is also a capable handler. The split double-cradle chassis and suspension setup are versatile, suitable for sporty riding as well as driving within city limits. Both variants feature a two-step preload-adjustable telescopic front fork and a preload-adjustable monoshock at the rear (both Showa units). The bike rides on 17-inch alloys wrapped in TVS tyres.

The RTR 200 4V is available in two variants: single and dual-channel ABS. The former is priced at Rs 1,28,020 and the latter at Rs 1,33,070 (ex-showroom Delhi). Both variants share all the features, including three riding modes, adjustable front suspension, and adjustable levers.

It is a definitive Apache. However, there’s a new all-LED headlamp, lending the bike a sharper face. That aside, the overall design hasn’t changed.

The RTR 200 4V comes with adjustable brake and clutch levers, adjustable suspension, and three ride modes. Also part of the package is a smartphone-compatible fully digital LCD instrument cluster that debuted on the TVS NTorq 125. Other than the usual trip-related data, the instrument console packs a lap timer, call and text alerts, and turn-by-turn navigation. It even shows you the lean angle, but only when it’s connected to your phone.

The TVS Apache RTR 200 4V BS6 goes up against popular bikes such as the Bajaj Pulsar NS200, KTM 200 Duke BS6, and the new Honda Hornet 2.0. Compared to the Apache, the Duke has become a lot more expensive. However, it gets a proper liquid-cooled motor that offers better performance.

TVS Motors was bit of a mute spectator last year as apart from adding variants it really didn’t have any new product launch in 2015. Gladly, for 2016 that isn’t the case as it is back with a new product and one that has been eagerly awaited – the TVS Apache RTR 200 4V. There have been rumours for many years that the Hosur-based manufacturer is looking at a successor to the Apache RTR 180 but creating a flagship product isn’t an easy task. It has the responsibility of being the best result a manufacturer can achieve and be a centrepiece of its engineering prowess. So it isn’t difficult to understand why the new TVS Apache RTR 200 4V took four years of development time before it could scorch the tarmac.

On paper, the new motorcycle has a mere 20cc displacement advantage over the Apache RTR 180 that has started to show its age cosmetically, mechanically, and dynamically. So does the TVS Apache RTR 200 4V have what it takes to deserve the flagship tag and was the wait worth it? Let’s find out. 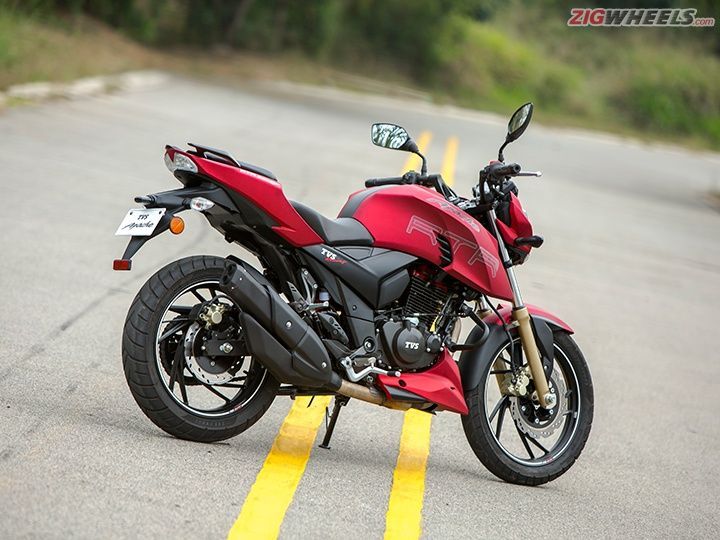 Design & Features:
One glance at the motorcycle and it’s easily recognizable as a bike from the TVS Apache family because the basic design silhouette has been carried forward. The TVS Apache RTR 200 4V has a chiselled and lean look with just the right amount of muscle at the desired spots. One is welcomed by a petite yet sharp looking headlamp which has been flanked by the boomerang-shaped LED pilot lamps that endow it with a very distinctive face. The beefy telescopic front forks finished in a shade of matte gold and the multi-spoke alloy wheels along with large petal disc rotors complete the front end. The instrument console is exposed sans any windscreen and it has an asymmetric profile (a bit of BMW Motorrad influence we shall say). 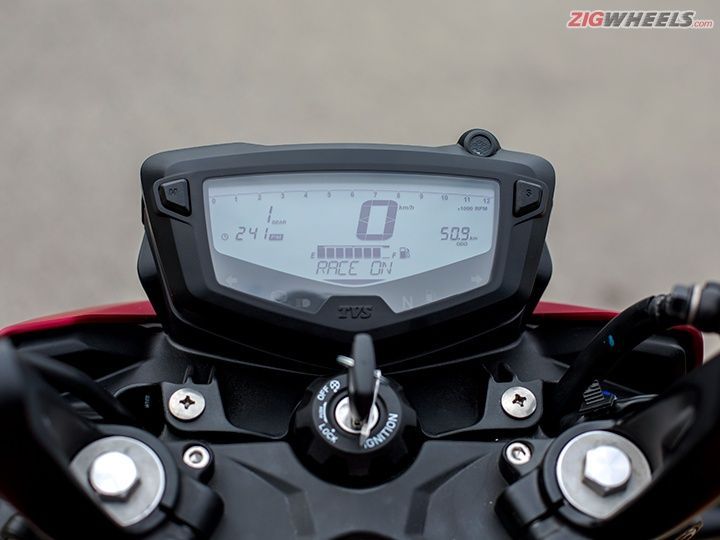 The mass forward design language can be easily appreciated in profile with the contoured tank and the integrated fuel tank extensions. An interesting design element is the off-set fuel tank lid with a contrasting red keyhole cover. Also, the engine head has been finished in red with the RTR logo engraved on it while the indicators are swept pack. Other standout design elements are the split seats, underbelly cowl and the Batman logo-shaped alloy grab rail. The twin barrel exhaust muffler is particularly unique in its form but it doesn’t gel well with the overall design of the bike and a stubby unit would have looked better. The TVS Apache RTR 200 4V gets equipped with an all-digital instrument console housing a speedometer, tachometer, trip meter, odometer and a shift light. 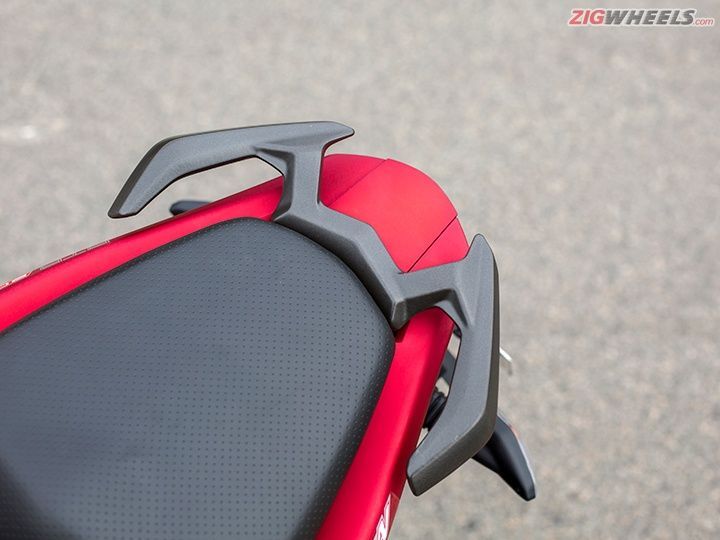 Other additional details includes lap timer, fastest speed recorder and gear indicator. The console is easy to read on the go but we would have preferred a larger shift light indicator. Switch gear quality is of the highest order while the levers have a buffed aluminium finish. Build quality along with fit and finish levels on the new Apache is impressive and it will be offered only in matte shade colour options. The overall styling of the TVS Apache RTR 200 4V is fresh and sporty while maintaining the Apache design ethos and it would definitely impress the youngsters. 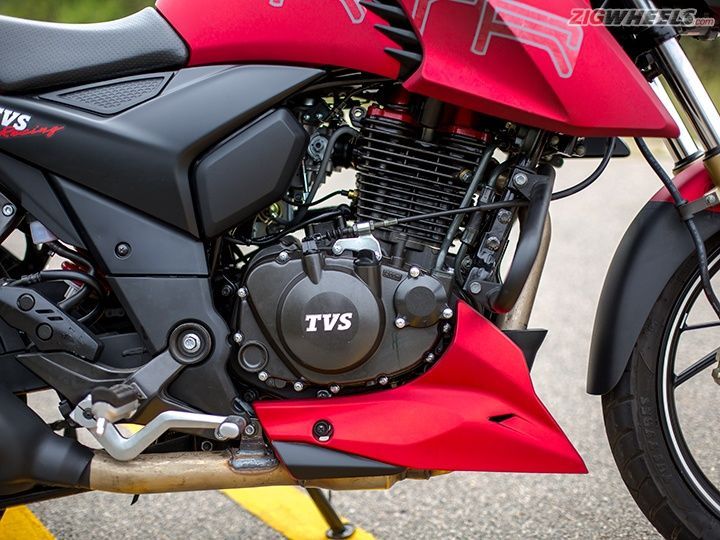 Engine & Performance:
As we mentioned before there is a hike of just 20cc on the TVS Apache RTR 200 4V in comparison to its predecessor. But the TVS boffins have worked extensively on the new engine to extract a good amount of juice. The 198cc, oil-cooled, single-cylinder and 4 valve motor will be offered in two different options – carburettor and fuel injection. The carburetted Apache RTR 200 4V delivers 20.3PS at 8,500rpm and 18.1Nm of torque at 7,000 rpm. This makes the new bike 3.3PS and 2.6Nm more powerful than its 180cc sibling which is a significant jump. The fuel injected variant of the TVS Apache RTR 200 4V churns out 21PS at 9,000rpm and 17.5Nm of peak torque at 7,000rpm.
Thumb the starter (there’s no kick start option) and the Apache 200 comes to life with a throaty idling note. The briefing for the engineers was that the new bike has to be the fastest accelerating motorcycle in its segment. And the moment one opens the throttle, the brisk acceleration can be felt right away (TVS claims 3.9 seconds 0-60kmph time). The bike also has a very strong mid-range with the bike hitting the 100kmph effortlessly and one can cruise at triple digit speeds all day long. Power is transmitted via a 5-speed gearbox which does a fair job but lacks the crispness offered by its Japanese counterparts. Watch Quick Video Review here: TVS Apache RTR 200 4V Video 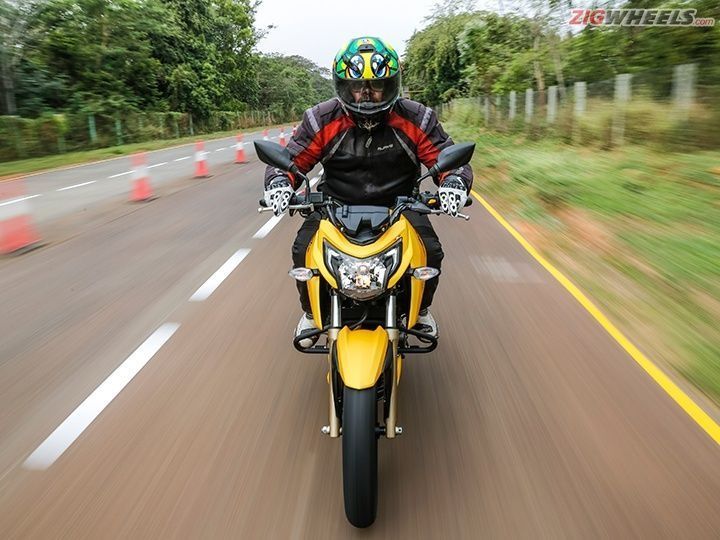 The standout feature for us of the power plant has to be its impressive refinement levels, and the TVS engineers have to be commended for their efforts. To improve the combustion efficiency and increase the piston’s shelf life, it is coated with Nano FriKs which is a combination of nano particles, binder, solid lubricants and additives. The oil-cooler system does its job well and ram-air technology has been employed for assistance in cooling. The fuel-injected version offered better throttle response which was crisp and immediate with a marginally healthier acceleration and top end. But only if you’re living in high altitude regions and face cold starting issues would we suggest to go for the fuel injected variant as the performance difference isn’t significant for the asking price. 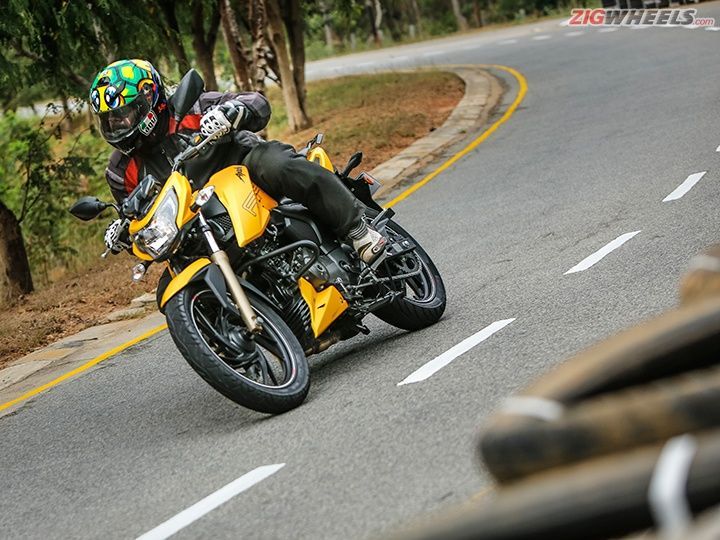 Ride, Handling & Braking:
Given its petite dimensions, one assumes that the rider would be cramped for space on the TVS Apache RTR 200 4V. But swing a leg over the motorcycle and one will be surprised by the amount of space on the saddle. The raised clip-on handlebars and a mildly rear-set foot pegs result in a slightly leaned forward but comfortable riding posture. The fuel tank recesses allow the rider to snugly hold the bike between his legs and the exposed instrument console gives it a higher displacement streetbike feel. The chassis on the Apache RTR 200 4V is a double cradle unit which has been completely reengineered and the result can be felt instantaneously. The bike attacks corners with great enthusiasm, there’s no mid-corner sway like its predecessor had, and there’s a marked improvement in handling dynamics. The chassis is very communicative and confident inspiring. 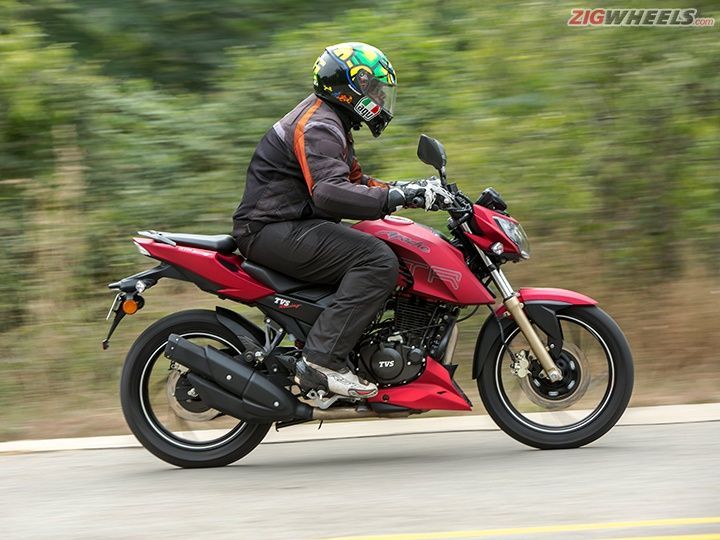 Another aspect that helps in improving the handling prowess of the motorcycle is the new TVS Remora tyres that offer good grip. But the optional Pirelli tyres are definitely a better buy owing to its performance advantage and will be our pick. The bike also changes directions swiftly, a trait that should be beneficial on the chicanes as well as while weaving through city traffic. Watch Quick Video Review here: TVS Apache RTR 200 4V Video 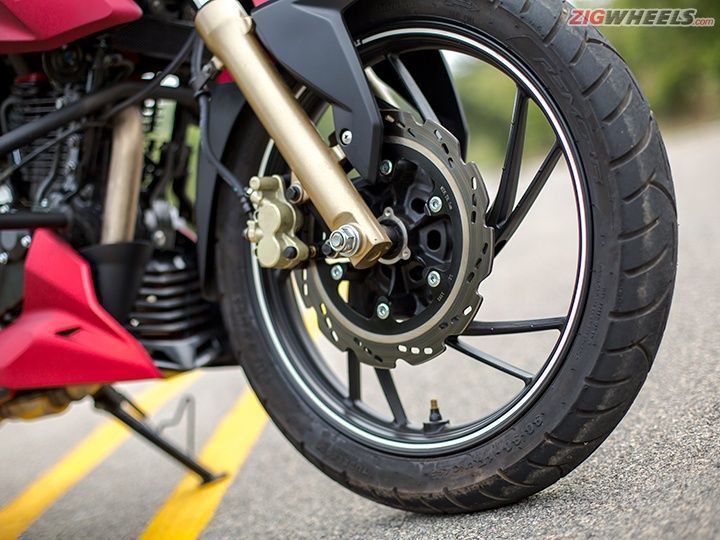 The new Apache RTR 200 4V is the first offering from TVS to get equipped with monoshock suspension setup. The bike has been sprung on the stiffer side but overall ride quality is decent and isn’t back breaking. Anchorage is provided by petal disc brakes on both the ends and they do a great job in shedding speeds. There’s good bite and progression through the levers. ABS isn't a part of the optional list but TVS will be launching the ABS version in March. 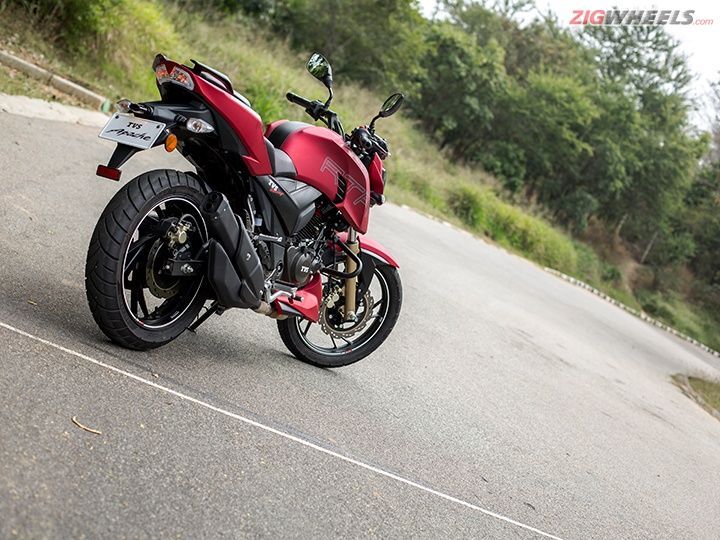 It looks the part with its edgy and sporty styling which should make it stand out among its rivals. Then there’s the fit and finish levels of the motorcycle which are definitely among the best in segment and the added benefit of TVS’s vast sales and service network. But what really makes the TVS Apache RTR 200 4V unique is its brilliant performance and lively handling dynamics that do complete justice to its performance DNA. The Apache RTR 200 4V is a huge leap for TVS in terms of engineering and if upcoming products do follow on its footsteps, we shall be looking forward to some fantastic motorcycles from TVS in the near future.

What are the colours available in TVS Apache 200 4V?