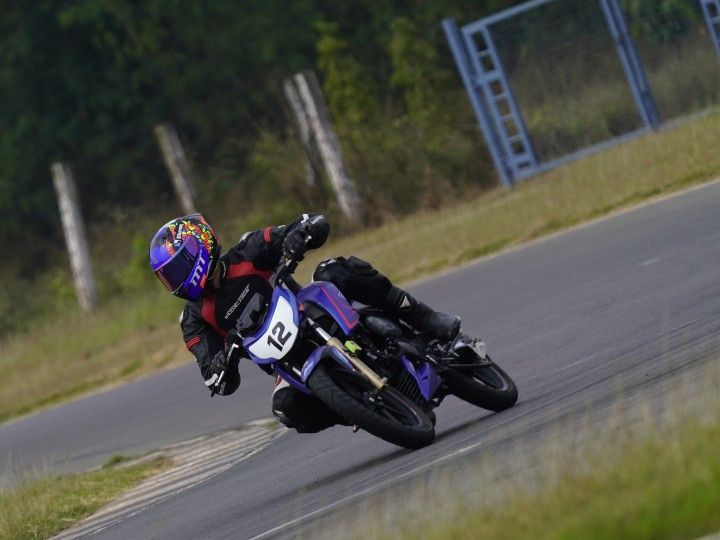 The joy of bringing a trophy back home, having the certificate framed onto the wall, discussing the thrill of racing over and over again… I did not want this to end. And with the last round of the fifth season of the TVS Young Media Race Program 5.0 approaching, the urge to have another trophy in the living room grew even stronger.

The race weekend arrived and though it had been a fairly friendly competition all this while, the racers seemed more determined this time, and why not, after all this could very well be the last time we raced. Every geared up, a bit anxious to not make mistakes, get reacquainted with their OMC TVS Apache RTR 200 4V and clock their best times.

The 20-minute practice session began, and my goal was to go under 2:18.787 (my best lap of the season), and assert domination for the qualifiers and the race. But fate (and my overconfidence) led me onto a different path.

Riding through C10 on the very first lap of the practice session, I went in a bit hot, lowsided and broke the footpeg and gear pedal. Yes, four months after my last stint on the same track, I leaned on cold tyres. Rookie Mistake #1: Warm Up Your Tyres Before Riding Hard.

The next 16 minutes or so were spent sweltering in the Chennai heat, seeing my competitor do lap after lap, improving their lines. I was disappointed, but not disheartened. Once back at the pits, I realised the intensity of my mistake.
Crashing out in the first lap left me no chance to understand and calibrate the tyre pressure and suspension according to my weight and riding style. So, while others had the mechanics tune their bikes to their liking, I was left overthinking of the repercussions that were to come.

Within the next three hours, my bike was fixed and ready to go back on the track. Once perched on the bike, I was ready to go back and it, and surprisingly, the crash hadn’t deterred me one bit. Straight out of the pit, and practised my launch and shockingly, I failed. But I moved on to make the most of the next 20 minutes.

While others were already going fast from their first lap, I was taking it slow, understanding the bike and the track. Into the third lap, I began pushing myself to my limits, but every time I would go hard into a corner, images of my crash from the practice flashed in front of my eyes. Rookie Mistake #2: Focus only on the present and nothing else.

The qualifiers concluded, and I was 8 seconds off my best time which was a shocker, but I was third on the grid. The title contender was two seconds quicker than me, and his launch and cornering skills had seriously improved. But there was no way I was coming back empty handed.

A brief discussion with the TVS Racing’s mechanic on the race day, and he knew exactly what I needed from my bike. The air pressure was dropped to increase contact patch on the skinny 110-section rear tyre, and the preload bumped up. And that did wonders.

We were on the grid, and the pressure was mounting. My launch was nowhere close to perfect and I WANTED second place in the race. The lights went out, and I dropped down to fourth, but I wasn’t going to let go of the third position. In my desperation, I stuck to the inside line, and leaned the bike to the best of my abilities and managed to clinch the third spot.

But that move compromised my exit through C2, and I lost precious time, widening the gap between me and the title contender. Rookie Mistake #3: Plan your moves well.

Over the course of the next two laps, I managed to steer clear of the competition behind me, but I was too far behind the first two riders. In my desperation, I went in too hot through C1 in the third lap, and almost crashed at C2, but managed to recover. While this blunder pushed me further behind, I tested the limit of the brakes in this process, and that was it.

In the third lap, my tyres were all warmed up for the abuse they were to endure in the next two laps, my focus was on the present and I had all my moves chalked out. As we proceeded to the fourth lap, the rider on the second spot was just a corner ahead of me, and by the time we hit the back straight, I was right on his tail.

The stakes were high now. One mistake from either of us could get us out of the race and cost us the championship. Right through C10 and C11, I stayed right behind him, and just at the last corner, dropped a gear to cut through a shorter line around the corner to overtake him and take the second spot.

All through the last lap, my aim was to not just crash, but hit the apex every single corner, widening the gap between myself and the title contender. Now, not only do I have a trophy and certificate for bagging the second spot in the race, but also for making it third in the championship. Crashing and winning a podium the very next day? Damn, there’s a lot to brag about now.

Stepping into a racer’s shoes not only gave us an opportunity to understand the pressure, pain and grit of the riders, but also turned us into better, calmer and focused riders. And even though you might not be looking at a career in racing, signing up for a riding school is a great idea nonetheless.