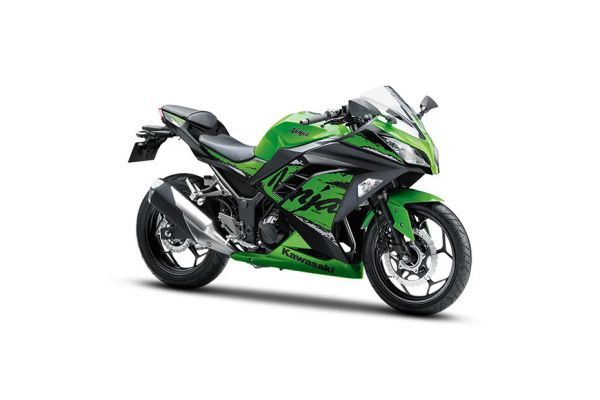 Kawasaki Ninja 300 is a sports bike launched at a base price of Rs. 2.98 lakh in July 2018 by Kawasaki in India. Ninja 300 is powered by 296cc engine claiming mileage of 32.1kmpl. Ninja 300 has a parallel twin, liquid-cooled, 8-valves, dohc engine and a 6 speed gear box. Kawasaki Ninja 300 comes with disc breaks in front and rear with a support of ABS. It is available in 4 colours.

The Kawasaki Ninja 300 is powered by a 296cc, liquid-cooled, parallel twin engine, which produces 39PS at 11,000rpm and 27Nm at 10,000rpm, mated to a 6-speed gearbox. The 300cc Kawasaki is equipped with 37mm telescopic front forks and a five-way adjustable gas-charged monoshock at the rear. The Ninja 300 rides on 17-inch wheels shod with 110/70 section front tyre and a 140/70 section rear tyre. Braking is managed by a 290mm petal disc up front and a 220mm petal disc at the rear, with ABS now as standard.

For 2018, the more affordable Kawasaki Ninja 300 for India remains unchanged on the design front. However, it does get new colour additions - Lime Green and Blue and new graphics too. The KRT edition though has been discontinued. The semi-digital instrument cluster has been retained as well. With the new price of Rs 2.98 lakh, the Ninja 300 is also Rs 62,000 cheaper than the earlier CKD model it replaces. That said, only the frame and the engine comes from Thailand now. The body panels, alloy wheels, tyres and brakes are now made in India. While tyres have changed from IRC to MRF Zappers, they are still not radials.

DSK Benelli 302R: The Benelli 302R isn’t an outright performer thanks to its weight. However, if performance isn’t a priority and if you are looking for a lot of pose value, the 302R is a good option. It feels smooth, offers confidence-inspiring handling and a very dramatic exhaust note that is similar to much bigger bikes.

Yamaha YZF-R3: The 2018 Yamaha YZF-R3 comes with a 300cc, liquid-cooled, parallel twin motor that is refined, powerful and tractable. Complementing the motor is a very capable chassis that feels just right regardless of whether you are in city traffic, touring or belting down the racetrack. The introduction of ABS dor 2018 adds Rs 23,000 to the cost of the previous version, but for that, you also get stickier Metzeler Sportec M5 tyres.

KTM RC 390 : While the KTM RC 390 is priced higher than the Apache RR 310, it packs in a lot more punch packed with more tech like the slipper clutch and is a pure track-focused machine. It has remained a go-to option for riders looking for a dedicated track tool owing to its ergonomics, suspension setup and handling characteristics.

TVS Apache RR 310: The Apache RR 310, despite being designed as a track focussed bike, is quite usable in the city thanks to its torquey and tractable motor. It offers a good balance between ride and handling as well. While brakes lack initial feel, they offer good bite. Another issue is vibrations around the 6000rpm range, which TVS has reduced to a fair degree. It is a good option to the focussed KTM RC 390, trading a bit of performance for everyday usability.

The Kawasaki Ninja 300 hasn't garnered a lot of fame in India, owing to its price tag. But with the new pricing, the future looks a lot more promising for the Ninja 300. It does come across as a very potent track tool with not so sharp ergonomics as the KTM. Making it a more approachable machine for riders to use it for their daily stints as well. Plus at Rs 58,000 you get an extra cylinder over the RC and a reliable Japanese brand name. Power though is still not at par with the KTM. Nonetheless, a twin-cylinder at this price is pretty tempting.