Does a new sticker job and inherent qualities keep the Ninja 300 relevant even today? 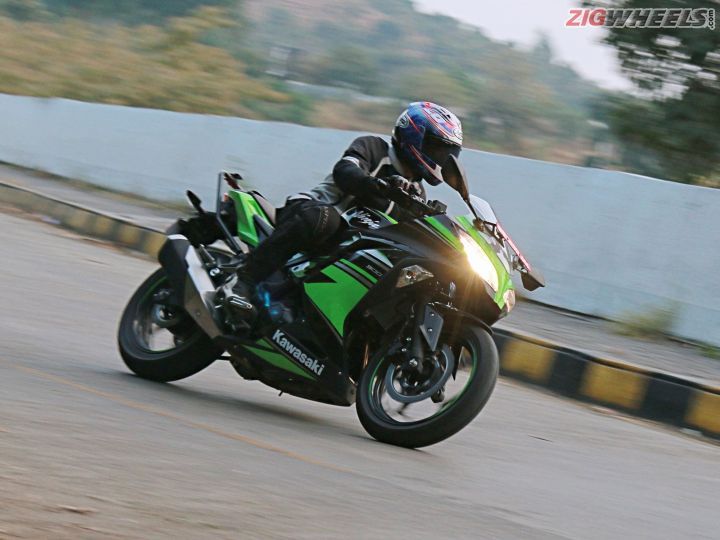 The Ninja 300 has been one of the pioneers of its segment. That of the multi-cylinder entry-level sports bike. It was the Kawasaki Ninja 250 that started this trend in 2009, and in 2013, passed on the baton to the larger, more powerful Ninja 300. Three years now, not much has changed and the Ninja 300 carries forward the same positive characteristics in new livery. The competition has expanded though. Now the question is, does this baby Ninja still offer value amongst the new flock of more affordable entry-level sportbikes which offer almost as much, or in a few cases, more, performance?

The Emperor’s new clothes:
New for 2016 is the Kawasaki Racing Team (KRT) livery and a new grab rail. While the livery does a good job of masking the large fairing sides, the grab rail feels like a gross afterthought. It starts from the pillion footrest stalk and extends all the way around the rear of the bike. Some might even mistake it for a wheelie bar. But aside that (easily removable) grabrail, we like the way the new livery manages to accentuate the bike’s profile and make it look fresh and, dare we say... meaner!

Quality:
The Ninja has always impressed in terms of quality. Fit and finish is impeccable. Even the livery gets an extra lick of clear gloss paint over it for durability. Switchgear placement is spot on, with all controls within reach. Quality is top notch and buttons exude a tactile feel. You will be hard pressed to find ungainly weld spots on the metal bits or even paint blemishes anywhere on the bike. Overall, the Ninja gives off the impression of a high quality, well built bike and feels worth the extra investment for the quality alone.

Japanese refinement:
Underneath that liveried skin sits a 296cc liquid-cooled parallel twin. This is a high revving unit, similar to the earlier 250cc parallel twin motor. Rev ceiling is a lofty 13,500rpm, as much as your litre-class superbikes. Performance too comes higher up: the motor makes 39PS at 11,000rpm and 27Nm of torque at 10,000rpm. With all that performance concentrated at the top part of the rev band, there is not much to play with at the bottom end. The motor begins to wake up post 5000rpm, with serious performance coming in post-9000rpm. With a powerband that feels strongest between 9000 and 13,000rpm, the motor feels best suited for track outings.

But you can ride it in the city as well, as its short-ratio six-speed gearbox makes sure the engine is kept on the boil. In the urban environment you can potter around in sixth gear at speeds of 50kmph, which will have the tachometer needle pointing at 3500rpm. Out on the highway, cruising speeds of 100kmph in top gear will have the motor spinning at 7000rpm, and this shows in fuel efficiency as well. In city running, the Ninja 300 managed 32.16kmpl while highway cycle had the bike give 31.10kmpl. With a large 17-litre fuel tank, expect a range of around 530km.

Performance runs saw the Ninja 300 do the 0-100kmph run in 7.18 seconds. It might not hold the very top spot in terms of acceleration amongst entry-level sports bikes, but it certainly is right up there. While the motor is extremely tractable at low speeds, thanks to its peaky power delivery, don’t expect any punch at the bottom end. In the city, it is all good until you have to overtake someone. That necessitates a downshift or two and a small wait as the motor comes into its powerband and propels you forward with gusto. Our 30-70kmph test run in third gear took the bike 4.13 seconds to execute while 40-80kmph in fourth took 5.05 seconds. It's the same story on the highway and can lead to nail-biting moments if overtakes aren’t planned well in advance with the bike already in the right gear.

Where the engine shines is refinement. It doesn't matter what side of the rev band you are in -- NVH levels remain smooth throughout, with next to no vibrations felt through the seat, footpegs or clip-ons. Refinement is of top order and easily the best in the segment. Another area where the Ninja 300 shines is in the lightness of its controls. Clutch lever actuation is light thanks to the inbuilt slipper clutch, which according to Kawasaki has reduced effort by 25 percent. You can easily modulate the feelsome and progressive clutch using two fingers, a boon in stop-and-go traffic. The gearbox too is precise with a slick and positive actuation. It allows quick downshifts from speed while the slipper clutch ensures next to no drama while doing so. A sorted transmission package this is.

Heat dissipation is another big plus. The motor never feels as high-strung as something like the KTM 390s and, thanks to its more relaxed nature, runs cooler as well. Even in traffic, it takes a while before the radiator fan comes on. Heat is directed to the bottom of the bike and away from the rider, keeping you comfortable.

Living with it:
Swing a leg over and you will appreciate the low 785mm seat height which allows you to comfortably place both feet on the ground. That and the low (for this class) 172kg kerb weight makes it easy to move the bike around. The instrument cluster is the same analogue-digital unit from 2013. It gets the job done but looks terribly dated now. The whole console is positioned mildly angled to the right, enough to trigger OCD in a normal person. The clip-on handlebars are set forward and low, while the footpegs are positioned high and mildly rearset. This makes for a riding position that’s comfortable for daily use, yet allows you to move your body around during some cornering shenanigans. It really is that sweet spot between the R3’s touring-biased setup and the RC 390’s super-committed stance.

Light on its feet, the Ninja 300 does not need much coaxing to tip into a corner. A slight shift in body weight is enough. Its suspension setup is a bit on the basic side, and includes a non-adjustable 37mm front fork with a preload-adjustable linked rear monoshock. Setup borders on the stiffer side. With a milder 27 degree rake, the front end feels a tad slow in tight corners and while transitioning from one corner to the other. But apart from really tight corners and chicanes, steering is eager and the bike also manages to feels stable when leaned over to either side. The rear too holds its line pretty well. But the proverbial fly in the ointment is the rubber on offer - the IRC tyres simply don't feel up for the job. They lack outright grip be it while braking or cornering, and fail to inspire confidence. A better set of tyres would work wonders here.

Ride quality is fantastic. Despite the stiffer setup, the suspension manages to soak up most imperfections. The only time when the stiffness really comes through is at low speeds. You can feel road imperfections but you are well cushioned from it. Ride quality improves with speed and is only limited by the short suspension travel.

Touring would be an easy affair on the Ninja 300. Its comfortable riding position and hidden bungee hooks at the rear speak of long-distance legs. The floating windscreen too offers fantastic wind protection provided you are tucked in under it.

Brakes are strong with a progressive bite. In normal conditions, the 290mm front and 220mm rear petal discs get the job done. But under hard braking, the Ninja 300 came to a dead stop from 100kmph in 60.08 metres. These slow numbers, though, can attributed to the tyres. In panic braking conditions, the lack of ABS coupled with the aforementioned tyres has the front wheel squirming a lot and threatening to break traction.

Thoughts:
The Ninja 300 always had a good design and with the new update it looks even better. Quality and refinement are two of its strongest suites, as is its accessibility for the inexperienced rider. But there is no hiding from the fact that it has been here a long time with no significant updates to show for it. Kawasaki probably did not want to update the Ninja 300 as they were working on the larger, more powerful Ninja 400. However the least we could have expected from the latest update is ABS and a better set of tyres, especially when at Rs 3.65 lakh (ex-showroom), the Ninja is the most expensive 300cc bike sold here.

The Ninja 300 would make sense if you are a new rider and do not mind spending the extra dough for refinement, comfort and quality. It does have the dynamic ability to excite riders and perform touring as well as track duties. But you do need to consider that while it is a good all-rounder, there are bikes now which, at lower price points, offer more specialised experiences. Now the Ninja 400, that would be a different ball game. You’ll have to patiently wait for it though!