Sportsbike, Naked Or Adventure - Which Is Your Favourite Premium Bike? Let Us Know!

Spoilt for choice? Select your favourite from these ten big-capacity bikes 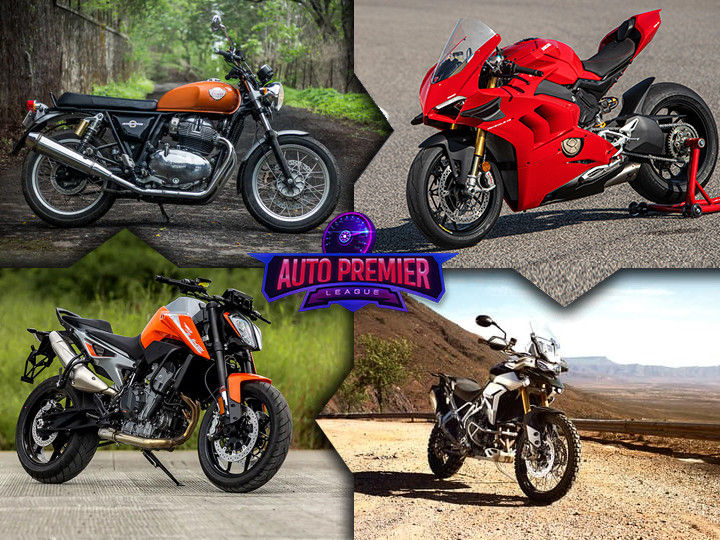 The big-capacity motorcycle segment in India is booming with a plethora of options. Nakeds, sportbike, adventure, cruisers and everything in between is here. But which one is the best?

Royal Enfield Interceptor 650
The 650 Twins mark the start of one of the most significant chapters in Royal Enfield’s history as the Interceptor 650 has been a runaway success in the large-capacity segment. It stays true to its traditional British twin roots with a characterful 648cc parallel-twin engine. It has a retro vibe which will appeal to Bulleteers across the world. It knocks it out of the park when it comes to value for money.

Kawasaki Z650
Kawasaki recently updated its mid-capacity naked, the Z650, to meet the BS6 emission norms. The naked has gained a new face while keeping in tune with the company’s Sugomi design philosophy. Performance more or less remains the same while weight has gone up by a kilo. Thankfully, it gets a fancy new colour-TFT screen with smartphone connectivity to stay connected on the go.

For further information on the Kawasaki Z650, head here: https://www.zigwheels.com/newbikes/Kawasaki/2020-kawasaki-z650

Honda CBR650R
The Honda CBR650R is or rather was India’s most affordable inline four-cylinder full-faired machine. The motorcycle is yet to receive its BS6 updates, which is likely to happen towards the end of the year. Still, the outgoing bike has been a significant upgrade over the old CBR650F, which was a simple no-nonsense motorcycle. The CBR650R is racier, has more oomph, and gets better components to enhance its sporty character.

For further information on the Honda CBR650R, head here: https://www.zigwheels.com/newbikes/Honda/cbr650r

Kawasaki Ninja 650
The Kawasaki Ninja 650 is one of the oldest modern big bikes offered in India. It has gone from being a sports-tourer to a cross between that and a full-fledged supersport. For the BS6 model, Kawasaki has equipped it with a few goodies to further enhance its appeal. The kit remains more or less the same with the only change being grippier Dunlop Sportmax Roadsport 2 tyres.

For further information on the Kawasaki Ninja 650, head here: https://www.zigwheels.com/newbikes/Kawasaki/2020-ninja-650

Ducati Panigale V4
Ducati took major strides in the development of its flagship sportbike, borrowing MotoGP technology to produce the phenomenon that is the Panigale V4. It is fast, striking, and loaded with electronic aids to the gill. It was one of the first motorcycles to breach the 200PS power barrier and its homologation special version, the V4 R, is the world’s most powerful naturally aspirated motorcycle on sale.

BMW S 1000 RR
BMW took the wraps off the latest generation of its litre-class sportbike, the S 1000 RR, last year and it received a mixed response. Gone are the much-loved asymmetric headlamps, which left a lot of fans disheartened. It also has lost its technological edge over other litre-class bikes. But, the S 1000 RR has become a better all-round package. The power delivery is extremely friendly and it is one of the lightest bikes in the class. It is also the first production bike in the world to get carbon fibre rims.

Honda CRF1100L Africa Twin
The Africa Twin is a hallowed name in the adventure motorcycling world, after all the bike got its name to commemorate the Japanese brand’s success in the toughest rally of the world: the Dakar rally. The avatar has gained cubes, has a larger fuel tank, and claims to be more accessible. Also, Honda India has finally brought the manual version of the bike to the country.

Triumph Tiger 900
The evolution in Triumph’s middleweight adventure series comes with the arrival of the Tiger 900. The ADV gets a larger 888cc engine with revised internals, all of which makes it better to ride on the road and off it. Triumph has equipped the Tiger 900 with IMU-based electronic aids, smartphone connectivity options, and top-spec hardware. The harcore Rally version finally gets tubeless spoke rims, aiding its off-roading credentials.

For further information on the Triumph Tiger 900, head here: https://www.zigwheels.com/newbikes/Triumph/tiger-900

Triumph Street Triple RS
The Triumph Street Triple naked series is regarded as the one of the best in its class and the RS has been the best we have encountered. The typical bug-eyes now get a different look and the bike now looks a lot more wholesome. Triumph has tuned the engine for better mid-range performance, making it a better all rounder.

KTM 790 Duke
For years, Indian enthusiasts have been craving for something bigger than the 390 Duke from KTM and in 2019, we finally got the 790 Duke. It is as mental as its younger sibling. While the spec sheet suggests that it is relatively low on performance, it is quite capable of giving more powerful rivals in its class a good run for their money. It is technologically advanced, making sure there is a setting for every sort of a rider.

For further information on the KTM 790 Duke, head here: https://www.zigwheels.com/newbikes/KTM/790-duke