The Bajaj Pulsar RS200 has received the highest premium amongst all of its Pulsar siblings. It now retails at Rs 1,57,184 (ex-showroom Delhi), which is a premium of Rs 5,005. The motorcycle hasn't received any significant updates in recent times and justifying this extra asking price is a hard task. Here's more details on the new prices.

Despite the BS6 update, the RS200 manages to match the power output of its BS4 sibling. While the BS4 model made 24.5PS, the BS6 Pulsar RS200 produces 24.47PS. Torque output, on the other hand, is likely to be around 18.3-18.6Nm. There’s no change in the bike’s hardware either. The Bajaj Pulsar NS200 continues to ride on telescopic forks and a monoshock. The bike is anchored by a 300mm disc up front and a 230mm disc at the rear. Dual-channel ABS comes as standard.

The entry-level supersport resembles a certain electric bike that’s been around for a while. The Pulsar RS 200 features sharp angular body panels, a full fairing, twin projector headlamps with eyebrow-type LED DRLs, and an LED tail light. The dual-tone paint scheme though has always been up for debate.

The bike gets twin-projector headlamps that offer ample illumination, a semi-digital instrument console that feels a bit dated, backlit switchgear, dual-channel ABS for safety, and clip-on handlebars for a sporty riding posture. The console reads out information like fuel gauge and features two trips meters, odometre, a clock, service-due indicator, and tell-tale lights.

The Pulsar is by far the most successful brand Bajaj has managed to create in the recent past. Not only has the brand spawned one successful product after the other, it is also probably the least notorious when it comes to model discontinuations; something the Discover brand is quite infamous for. So, what is it that worked for the Pulsar? Apart from the first mover advantage, it also packed in just the right noise, styling and performance flare that budding motorcycling enthusiasts were looking for. It was the ideal combination. Now, however, the wants have changed. That typical Pulsar buyer today is more mature, more discerning and completely spoilt for choice. What he wants today is a new age Pulsar... And this is what Bajaj has come up with - the Pulsar RS200, and it claims to be the fastest Pulsar yet! 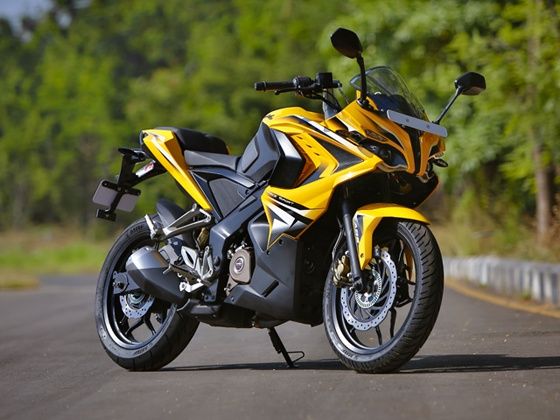 Now before we get to the claims of the RS being the fastest Pulsar and the like, let's first look at what's visually new about the motorcycle. The RS is based on the 200NS. So, it uses the same perimeter frame, the same suspension front and rear, and the same wheels and tyre specifications. Now the tyres might be of the same specifications, but these are in fact one of the best that MRF has produced, which we will get to in a bit. These apart, some of the styling has also been carried over too. The fuel tank (though with a slightly different looking cover on the RS200) is the same as the Pulsar 200NS, and so is the switchgear and the instrumentation. 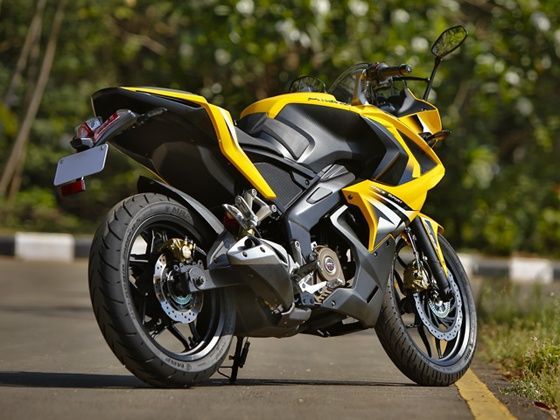 What's new though is the multi piece faring; it is designed to ease serviceability and lower parts replacement costs in case of a crash. The mean looking projector head lamps as well as those oddly placed and shaped rear LED tail lamps are exclusive to the RS200 as well. The side and tail panels are new (the latter also houses neatly designed grab handles), and the RS finally gets an exhaust that one can see. Overall, the RS200 is a busy design; there's just too much happening here to actually call it pretty. But, it will draw glances, that's for sure, even though not all may be appreciative... 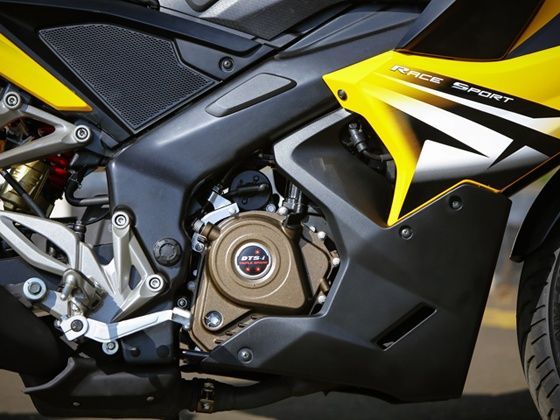 The engine on the Bajaj RS200 is the same as the 200NS; same bore and stroke and the same bottom end. But this one gets fuel injection. As a result the engine is smoother; the throttle response is crisper; and the power delivery, more linear and predictable. It also makes one PS more... which as you can tell, is near insignificant. Now, the RS thanks to the fairing, the fuel injection, the new exhaust, the ABS unit and those large tail lamp mounts, is 20kg heavier. And that's quite a bit of weight gain. To compensate, however, Bajaj says it is running a shorter final drive. And thanks to the additional PS and better aerodynamics, the RS actually registers a true speed of nearly 141kmph compared to about 136kmph registered by the 200NS. 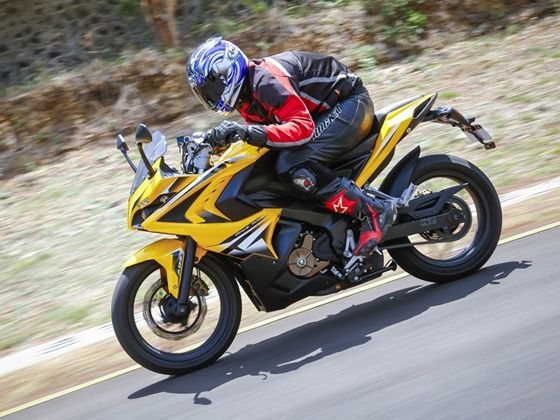 As for die hard Pulsar fans, yes, the engine isn't completely quiet but it isn't as brash as before; it actually sounds way more refined and grown up. It also seems up for a good thrashing without threatening to fall apart. It's quite likeable, this engine. 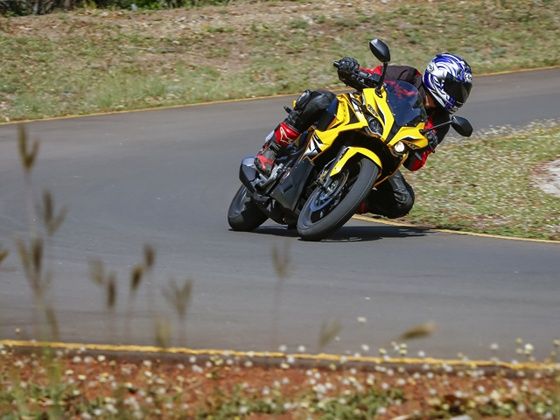 We have only ridden the new Bajaj Pulsar RS200 on a closed circuit, so we can't really comment on the ride quality. But given that it uses the same mechanicals as the Pulsar 200NS with more or less similar tuning, we can take an educated guess here that the RS200 too should prove to be a comfortable commute over broken and undulating roads. Now, about the fun bit, handling. Facts dictate that because the Pulsar RS200 is 20kg heavier than the naked 200NS, it ought to be lazier, more cumbersome and more physically tiring to ride than the latter. But it isn't! And though a good handler the NS might be, I never really warmed up to its seating or its front heavy weight bias. The weight basis hasn't changed on the RS either, but its seating ergonomics is much improved. The handlebar has moved forward and is taller (to aid turning without fouling with the fairing) and the footpegs have moved a bit to the rear as well. The final result is a seating position that feels great for both straight up touring and crouched down track racing. 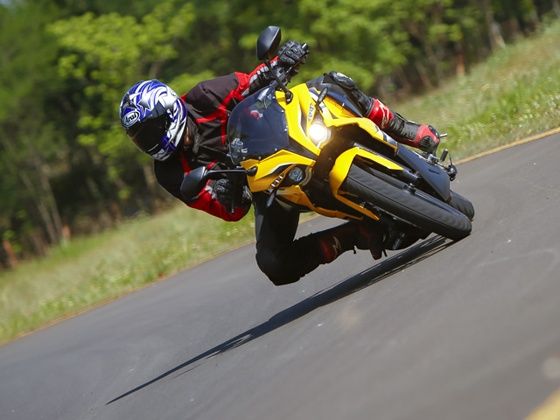 But the real surprise here is the RS200's handling. It's so poised and alert that the RS never really throws a tantrum no matter how hard you chuck it into a corner or ask it to make quick direction changes. There's good feel from the chassis and the front end, and those MRF tyres are super grippy too! Even with the footpegs of the RS firmly grounded in tarmac around a bend and the tyres literally riding on their sidewalls, the MRFs still felt fantastic. 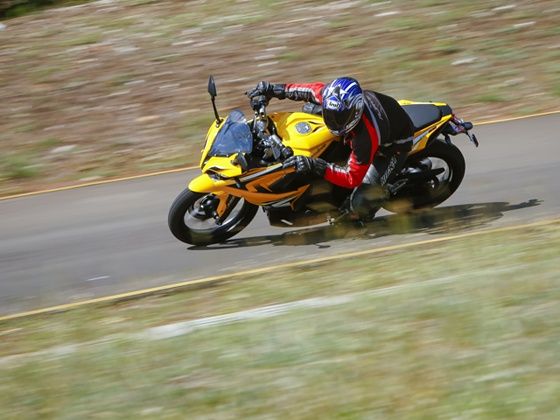 What's also impressive about the RS 200 is that it is the only motorcycle in its class to offer ABS. Now this one is a single channel ABS so it only works on the front wheel. Which means in a panic situation unless you grab that front brake lever with all your might, you will have to contend with a ferociously sliding rear end. But when you use both brakes, as we did, yes, the rear still slides, but it's a lot more controllable. The bite and feel from the brakes, particularly from the 300mm front rotor is strong and easy to modulate too. 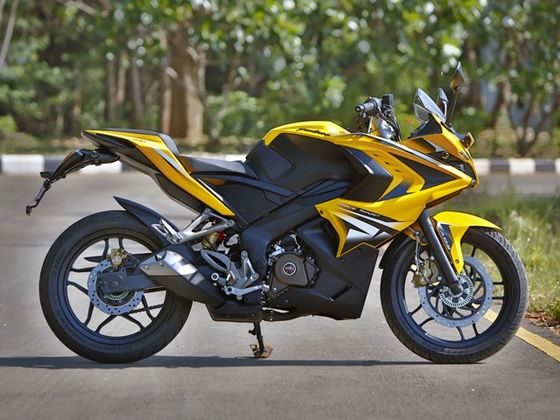 With a price tag of Rs 1.3 lakh for the ABS version, the RS200 takes on the likes of the Yamaha YZF R15 and the Honda CBR 150R on one end and the likes of the KTM RC 200 on the other. This pricing also makes the RS200 the most expensive Pulsar yet. As far as fuel efficiency goes, expect the motorcycle to return a little less than the Pulsar 200NS given the added weight. 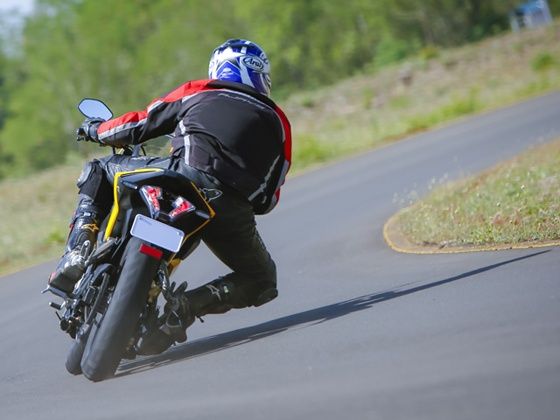 Bajaj has clearly outdone itself with the Pulsar RS200. I don't like the styling, and I am not too happy about the additional weight it carts around, but on the road - and in our case, a test track - it feels well engineered, well executed and fun to ride. It's also easy to get used to even though it is anything but slow. And lest we forget, at Rs 1.3 lakh, it's the only motorcycle in its class to come with ABS, single channel not withstanding. And to me given the qualities the RS200 packs in, it's quite a deal; something I never thought I'd say when I first heard its price.

What is the price of Bajaj Pulsar RS200?

Does the Bajaj Pulsar RS200 have ABS?

What is the EMI of Bajaj Pulsar RS200 in Delhi?

What are the colours available in Bajaj Pulsar RS200?