Looking to buy a faired, sporty-looking motorcycle on a budget? Here’s an on-paper comparison of all the top players 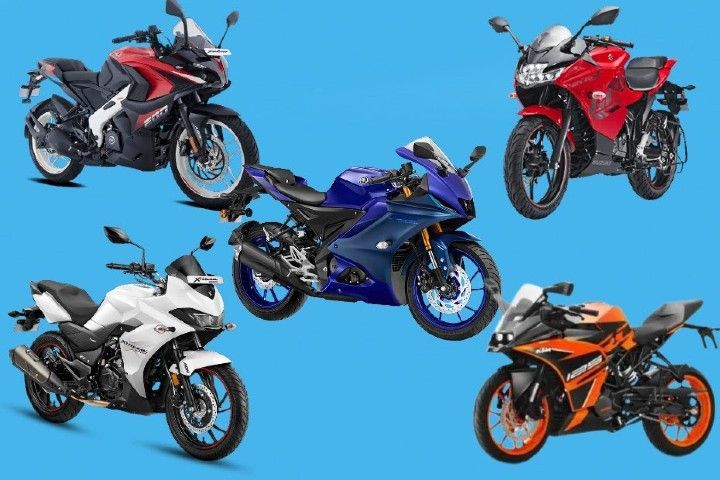 Faired motorcycles are real heart-throbs, and the majority of motorcycle enthusiasts would probably agree. However, not everyone can afford sharp, sporty superbikes, and this is where small faired bikes come into the picture. And to find out which one of them is the best investment, we’re putting the Yamaha R15 V4, Bajaj Pulsar RS200, Hero Xtreme 200S, Suzuki Gixxer SF, and KTM RC 125 against each other.

The Bajaj Pulsar RS200 proves there’s no replacement for displacement by offering the highest power and torque figures. However, this motor has remained unchanged for a long time now, missing out on modem tech like a slipper clutch or variable valve actuation, both of which are present on the Yamaha R15 V4.

For city stints, though, the Hero Xtreme 200S and the Suzuki Gixxer SF, with their peak torques kicking in at 6,500rpm and 6,000rpm (respectively), should be ideal.

However, despite having a bigger engine, the Gixxer’s output is the least impressive as it even falls short of the smaller KTM RC 125, which is a bummer.

The baby KTM RC 125 has the most sophisticated package here, thanks to its beefy 43mm USD fork, big 300mm front disc, and wide tyres, all coupled to a proven trellis frame. Easy win, right? Well, not really. The baby RC is good, but it’s closely matched by the updated Yamaha R15 V4, which also uses a USD fork and a slightly smaller 282mm front disc. What will give the R15 a slight edge, though, are its slimmer tyres, reducing unsprung mass and friction, making it easier to maneuver.

Coming in a close third is the RS200, which shares its disc size with the RC. But blame it on its 130-section slimmer tyres and a conventional telescopic fork, it doesn’t feel as premium as the RC or the R15.

The Suzuki Gixxer SF and Hero Xtreme 200S aren’t meant for spirited riding, and they feature fairly conventional suspension and braking setups. We’ll give this round to the Hero, considering it’ll be more easy-going in the city because of its slimmer tyres.

The Suzuki Gixxer SF is the most well-rounded package for new riders, courtesy of its low seat height, a decent 12-litre fuel tank, and the second-lowest weight in the lot. However, the R15 V4 has the lowest kerb weight and the shortest wheelbase, giving it an advantage when navigating tight paths. However, with a seat height of 815mm and aggressive ergonomics, it isn’t ideal for shorter riders or city duties, for that matter.

The Pulsar RS200 and Hero Xtreme 200S are closely matched. But the former is over 10kg heavier, has a longer wheelbase and a lower ground clearance, which gives the edge to the Hero.

Lastly, we have the KTM RC 125. With a seat height of 835mm and a kerb weight of over 150kg, it isn’t an easy-going bike, at least on paper. The puny 9.5-litre fuel tank (smallest of the lot) doesn’t help its case either.

The new Yamaha R15 V4 is a no-brainer in terms of features. Some variants of the R15 even get segment-first quickshifter and traction control. In second place, we have the baby RC 125. It ticks all major boxes, only missing out on Bluetooth connectivity and an LED headlamp.

In the third and fourth, we’d put the Hero Xtreme 200S and Suzuki Gixxer SF, respectively. While both pack mostly the same things, Hero offers connectivity features, which are missing on the Gixxer.

And as expected, the aged Pulsar RS200 rounds up the standings. It is by far the least feature-packed and the only motorcycle to miss out on a fully digital console.

Judging from a price-to-feature ratio, the Hero Xtreme 200S offers the best value if you’re in the market for an easy-going, pocket-friendly faired bike.

But if budget isn’t exactly a concern and riding experience is high in your checklist, we’d recommend the Yamaha R15 V4. Not only does the new R15 look smashing, but it has good performance on offer as well.