Sometimes, there is replacement to engine displacement 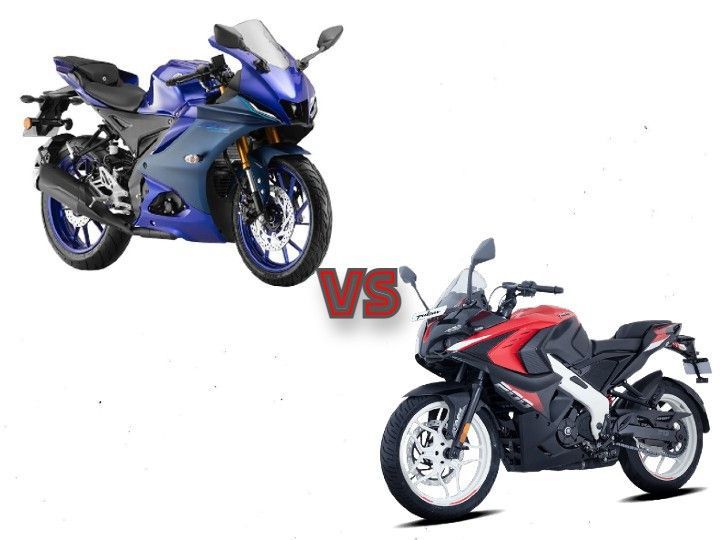 The Yamaha R15 introduced the idea of affordable supersports to Indian enthusiasts. Over the years, competition grew, yet the Japanese supersport continued building a stronger fanbase. Now, in its fourth-generation avatar, the Yamaha YZF-R15 is more expensive than the Bajaj Pulsar RS200. So, should you really pick a 155cc motorcycle when you could get a more powerful alternative at the same price? Let’s find out.

Both bikes use 4-valve, liquid-cooled engines, and thanks to the 45cc advantage, the Pulsar develops 6.1PS and 4.5Nm more. While Yamaha’s engine is smaller, it packs more equipment than the Bajaj. For starters, it gets variable valve actuation (VVA), meaning the low-end grunt doesn’t come at the cost of top-end performance. Furthermore, the 6-speed gearbox on the R15 is paired with a slip-assist clutch so that clutch action lighter and aggressive downshifts don’t throw you off-guard.

Yamaha has retained the fabled Deltabox (perimeter) frame. But the big news comes in the form of the USD fork, which is a first for an India-spec model. At the rear, it gets a link-type monoshock good at soaking minor undulations. On the other hand, the PulsarRS200 relies on a regular telescopic fork and a gas-charged monoshock. Though the latter is swingarm-mounted, the gas canister aids damping, which should result in a smoother ride.

The braking setup on both bikes is similar -- discs at both ends paired with axial calipers at the front. Dual-channel ABS comes as standard on both. However, the RS200 gets bigger discs considering the more performance generated and its extra heft.

Like the previous-generation model, Yamaha chose to equip the V4 with a bias-ply front tyre and a radial rear tyre, a set up that has its limitations. Bias-ply tyres tend to heat more and wear out faster than radial units, and even have slightly poor traction levels. The Bajaj Pulsar RS200 not only has bias-ply tyres at both ends but also a slimmer rear tyre, limiting cornering angle.

If it's cornering we are talking about, the R15 V4 takes the win. In addition to being lighter by 24kg, the taut 1325mm wheelbase makes the bike super agile in the corners. Also, the 815mm seat height makes the bike manageable for riders of all sizes.

The Bajaj Pulsar is slightly different, maintaining that balance between everyday useability and outright sportiness. That said, the 157mm ground clearance might be problematic when encountering big speed bumps on your commutes.

Now doesn’t the Yamaha YZF-R15 justify its price tag? Sure, it is more expensive than the Bajaj Pulsar RS200, but for that, Yamaha is offering better hardware and a host of features, including segment-first additions. When compared to the R15, the Pulsar RS200 certainly feels dated and is best suited for someone looking for a bike to commute and go on occasional weekend jaunts.