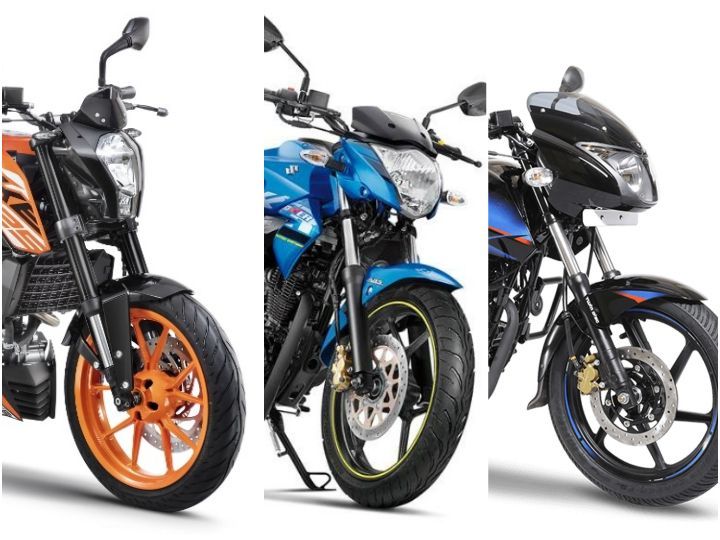 The introduction of the KTM 125 Duke is bound to change the way enthusiasts look at small capacity commuter motorcycles. While the 125cc space is filled with bikes perceived as slow and affordable, the 125 Duke is positioned as a premium 125cc offering from KTM that’s sure to ruffle some feathers in the market. But why exactly are we comparing a 125cc to 150cc bikes? It’s because the baby Duke’s power output is close to, and in some instances, even higher than its 150cc competition. So here’s a look at how the baby Duke fares against the main players in the 150cc segment on paper.

Though the 125 Duke looks identical to the 200 Duke, KTM has revised the graphics on the smaller bike to differentiate the two. Other than the graphics and the engine though, the 125 Duke gets the same instrument console, bodywork and mechanical components. And, we aren’t complaining. The all-digital instrument console is the most info-laden console one can get in the 125cc motorcycle space. For instance, besides the speedometer, tachometer, odometer and fuel gauge, it features real-time and average fuel efficiency, service indicator and distance-to-empty too. You also get a shift indicator in the centre along with telltale lights.

The Suzuki Gixxer is easily one of the best lookers in its segment, and its masculine styling strikes the right chord with younger buyers. In addition to this, it also features an all-digital instrument console with the essential readouts, a shift light and a gear position indicator. The Gixxer gets a paint scheme inspired by Suzuki’s MotoGP race bike, a beefy end can with chrome elements and rim tapes.

Last of all, the Bajaj Pulsar 150 Twin-disc variant has got some updates for the upcoming year to keep it fresh and relevant. Though the overall silhouette of the bike remains pretty much the same, it gets trendy graphics, a belly pan and body coloured rims tapes which add to its sporty appeal. Additionally, the side panels on the Pulsar 150 twin-disc variant now feature faux carbon-fibre texturing. The analogue-digital instrument console on the bike feels a bit dated compared to its competition and surely needs some freshening up. That said, the red rev needle which pulls all the way to 10,000rpm is a joy to look at.

If we had to pick a winner from the trio in terms of looks and features, we’d most definitely choose the KTM 125 Duke. Though it's the most expensive proposition here, it gets features that even the 150-160cc segment misses out on. And then there’s the way it looks!

Coming to the crux of the matter - is the KTM 125 Duke’s engine potent enough to compete with its rivals? Yes, it is! Despite being a small little 125cc motor, its power output is nothing short of impressive. Along with this, the smaller Duke comes with a crucial sixth cog which should help it achieve a higher top speed.

The Gixxer’s engine feels a bit gruff, but loves to be pushed hard. On the contrary, it tends to lose steam towards the top. Furthermore, the company’s SEP (Suzuki Eco Performance) technology helps it return fuel-efficiency figures of around 50-55kmpl.

Though we haven’t ridden the Pulsar 150 twin-disc variant, we have tested the standard Pulsar 150 which shares the same engine and mechanical components. Taking the Std Pulsar as a reference, we can say that the Pulsar 150 feels more responsive compared to the old-gen bike. The throttle response is crisp and the 5-speed gearbox offers almost seamless shifts. The engine still feels eager and provides a linear power delivery across the rev range. Also, it features the biggest tank in this competition which will keep you on the road a lot longer.

If you consider numbers alone, the Suzuki Gixxer wins hands down. However, the way the power is delivered on the Pulsar is a lot more impressive. The Duke, on the other hand, gets that extra cog which should help it achieve a higher top speed and maintain it for a longer duration, thanks to liquid cooling.

The KTM 125 Duke sports premium components like fat 43mm upside-down front forks and an adjustable monoshock, both from WP. It also employs a steel trellis frame which should offer better handling capabilities compared to the single and double-downtube frames on the Gixxer and Pulsar 150 respectively. And the goodies don’t end there, the baby Duke features the fattest tyres in its segment - 110-section up front and 150-section at the rear.

As for the Gixxer’s chassis, it's been developed under the supervision of the same designers who worked on the GSX-R series. Weighing in at just 136kg, the Gixxer is extremely nimble and also the lightest bike here. And even though the KTM gets bigger disc brakes with single-channel ABS, the setup on the Gixxer feels capable and offers good feel and reasonable bite too.

Despite being positioned as a commuter, the Pulsar 150 still holds its own in fast sweeping bends. Additionally, its double-downtube frame setup should let you zip through city traffic with ease. It’s also the only bike here with twin gas-charged suspension setup at the rear.

Despite not having ridden the KTM 125 Duke, the fact that it borrows its underpinnings from the 200 Duke should give it the competitive edge here. However, the Gixxer is a good handler and tackles our Indian road conditions quite well too.

The 125 Duke is positioned as an entry-level bike in KTM’s lineup. And even though it’s priced at the higher end of the spectrum, its premium components more than make up for it. It will appeal more to new riders who find the 200 or 250 Duke a little too intimidating.

On the contrary, the Suzuki Gixxer makes for a well-rounded package. Its masculine looks, coupled with a reasonable performance makes for an exciting proposition. The Pulsar 150 would make for the best value-for-money proposition here with a price tag of Rs 80,784.