Should You Really Be Considering The Limited Edition Apache RTR 165 RP? 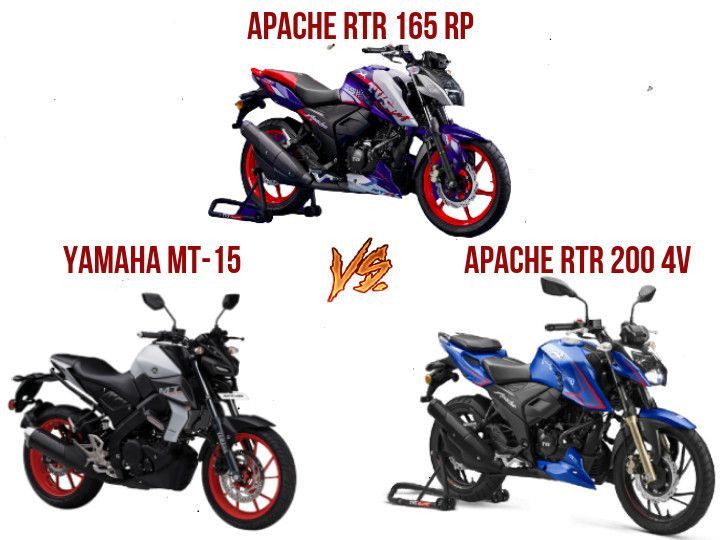 The limited edition TVS Apache RTR 165 RP has made its debut, and is the most powerful motorcycle in its class. In fact, it produces more power than the Yamaha MT-15. But there’s more to motorcycles than power figures, right? Moreover, at Rs 1.45 lakh, the RP isn’t cheap either. With that much money, should you be really placing your bets on the new bored-out Apache RTR 160 4V or save around Rs 7,000 and go for the TVS Apache RTR 200 4V? Let’s find out.

As they say, ‘there’s no replacement for displacement’. The RTR 200 4V takes the cake here. Not only does the bigger engine produce more performance than the other two, you also have the option to switch riding modes and opt for a milder tune when riding in rain or traffic. Meanwhile, the RTR 165 RP has been tuned to produce its power much higher in the rev range, just like the MT-15.

The Japanese naked produces the least performance of the three, but comes with a variable valve actuation. So the two-cam profile allows for a healthy low-to mid-range grunt without compromising on the top-end. Adding to the MT’s advantage is the 10kg difference over the 165 RP and 14kg over the RTR 200 4V and aiding its top speed is the six-speed gearbox.

The TVS bikes use the same frame, braking hardware and tyres. However, the main difference comes in the suspension setup. While both use Showa-sourced suspension, the RTR 200 4V packs a preload-adjustable fork, which allows the rider to fine-tune the setting as per the riding conditions. The MT-15, on the other hand, doesn’t flaunt sophisticated forks but gets a link-type monoshock. This allows the bike to soak up bumps better compared to a monoshock setup attached directly to the swingarm.

The TVS Apache RTR 200 4V is also the only bike here to come with a dual-channel ABS unit. Though RTO documents show Yamaha MT-15 with dual-channel ABS has been registered, the bike maker is yet to launch it.

Considering its taut wheelbase, and the fact that it’s the lightest amongst its competitors, the Yamaha MT-15 will be friendlier in the urban jungle. However, the short wheelbase also means that even though it is nimble, the mid-corner stability won’t be as good as the Apaches. TVS has made its bikes friendlier for everyday usage, with a respectable 180mm ground clearance, while keeping seat height accessible for shorter riders.

The TVS Apache RTR 200 4V again bags the win here. Right from Bluetooth connectivity, navigation to GTT (Glide Through Traffic) and riding modes, the RTR 200 4V has it all, despite being the most affordable bike of the lot. On the other hand, the MT-15 comes with no noteworthy features despite being the costliest bike here.

The TVS Apache RTR 165 RP definitely is an applause-worthy attempt from TVS. It pushes the envelope of what a motorcycle of this class can achieve, but it is limited to 200 units, and not having adjustable suspension limits your learning curve if you intend to step into racing. As for the MT-15, the Japanese naked should be a great weapon in the urban jungle, but for anything beyond that, we’d recommend the Apache RTR 200 4V. It gives more bang for the buck, packs more performance, has more features and is the most affordable of the lot.