A new RC was spotted testing sans any camouflage near Pune. All signs point to it being the India-spec RC 125. 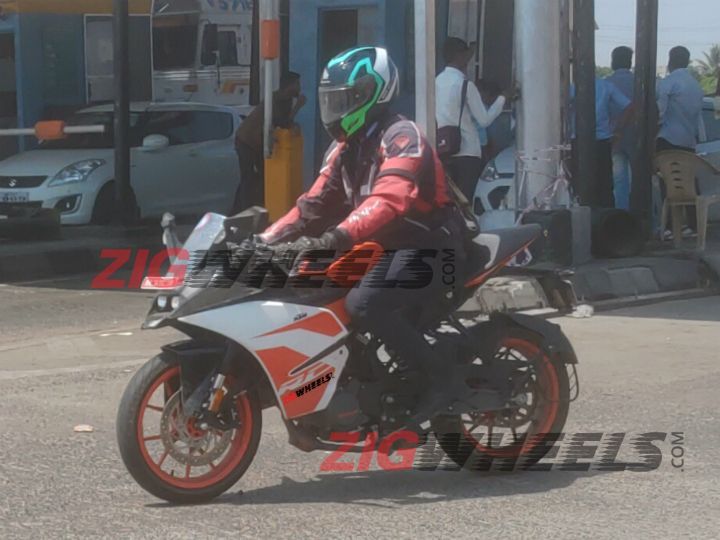 Buoyed by the 125 Duke’s success, it appears KTM India is prepping a faired sibling of the 125cc motorcycle. A motorcycle that could well be the RC 125 was spotted testing around Pune, sans any camouflage.

The baby RC is already on sale in European markets. However, the Euro version gets a side-slung end can like the 390 whereas the test bike we spotted had an underbelly unit. The RC styling has not changed since its launch in 2014 and we expect the RC 125 to look just like the RC 200. There are likely to be a few colour changes between these two RC siblings as the test 125 was seen sporting a white fairing with an orange tank, the latter not present on the RC 200. Even the under-tail section bears a RC 125 graphic which suggests the motorcycle's imminent arrival.

If our conjecture is correct, it will get the same 124.7cc single-cylinder mill as the 125 Duke, which makes a modest 14.5PS and 12Nm. We have already ridden the 125 Duke on the track and were mightily impressed with its capabilities. Yet when we rode it in the city, we felt the engine could do with a little more low-end grunt. It is unlikely that KTM is going to change the tuning of the motor for the RC 125.

The base for the RC 125 is likely to be the RC 200 itself, with the same chassis and mechanicals components adopted for the baby RC. Since the 125 Duke as well as the 200 Duke bear the same kerb weight of 148kg, expect the RC 125 to weigh the same as the 200, i.e. 160kg with fluids. It is likely to get the same WP suspension units at either ends: 43mm USD forks with 125mm travel up front and a monoshock at the rear. Braking units are also likely to be unchanged, with a radial caliper operating on the 300mm front rotor, and a single piston caliper with a 230mm disc at the rear. Single-channel ABS will be standard.

The RC 200 costs close to the Rs 2 lakh mark, a steep ask for a 200cc motorcycle. Hence, bringing in a low-displacement supersport which is lighter on the pocket and easier to live with does make sense. If launched, the RC 125 could be priced under Rs 1.40 lakh. This will make it a direct competitor to the more powerful Yamaha R15 v3.0 ABS which was launched at Rs 1.39 lakh (ex-showroom Delhi). We await to hear more news from the Austrian bikemaker soon as there are a few KTMs planned for 2019, including the 790 Duke and the 390 Adventure. Stay tuned to ZigWheels.com