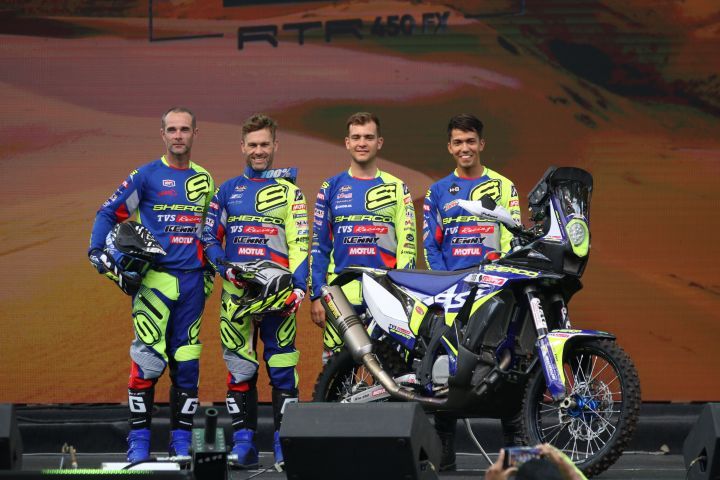 TVS kicked off its inaugural MotoSoul event with the announcement of its rally team for the 2020 Dakar rally. Like 2019, the Sherco-TVS Racing team will comprise of four riders for the upcoming event. Unfortunately, the team’s Indian rider for the past three Dakar rallies, Aravind K P, will miss going to Saudi Arabia for the 2020 rally as he is still recovering from leg injuries that he sustained during a practice session.

Leading the charge for the Indo-French outfit is Michael Metge. The French rider has been consistently strong at the Dakar rally. 2019 was his maiden attempt for the team at Dakar, having previously ridden for the factory Honda team. He won the 2019 Baja Aragon rally, which was TVS’ first major rally victory on the international stage.

Teaming up with Metge is Lorenzo Santolino and Johnny Aubert. Lorenzo was running amongst the top riders in 2019, which is extremely commendable considering that it was his debut at the Dakar rally. He even finished fourth on stage 5. Ultimately, his inexperience caught him out as he was on the end of a nasty crash in stage 6. Lorenzo will be looking forward to redeem himself this year. Teammate Aubert might be a rookie heading into this year’s Dakar, but he has been a multiple-time World Enduro champion. Aubert was also impressive at this year’s Rallye du Maroc where he finished 14th.

Despite Aravind’s absence, TVS will be giving national supercross and rally champion, Harith Noah, a seat for the 2020 Dakar. Whenever Harith has been given a chance to prove himself on an international stage, he has shown positive results. This is a big opportunity for Harith to showcase his talents as he becomes the third Indian ever to participate in the gruelling Dakar rally.

The ultimate test of man and machine kicks off on 5 January, 2020 in Jeddah, Saudi Arabia. While KTM had dominated the event when it migrated to the South American continent, it will be interesting to see who will be the first winner of the rally on Asian soil.