ZigOpinion: Why Flex Fuel Is The Next Step In The Future

Flex fuel technology seems to be ripe for the picking before EVs become mainstream. Here’s why we think it makes perfect sense 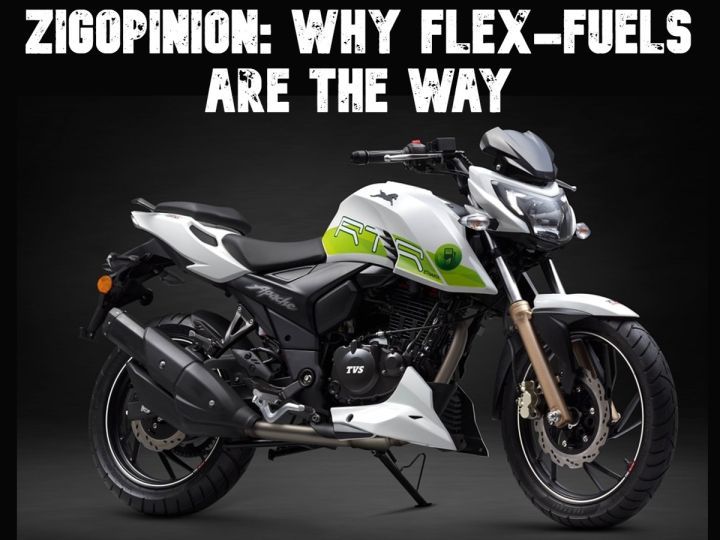 Let’s face it, the automotive industry has to go green at any cost to avoid serious repercussions to the planet. But then, the cogs in the smoking machine of capitalism are in such a way that change is very hard to implement. So, flex fuel technology has become the middleground, a means to an end of sorts in our journey to a greener earth. That said, implementing this technology also has macro-economic benefits, and here’s why we think this makes perfect sense:

Most modern internal combustion engines are already flex fuel-ready. In fact, in our exclusive interview with Jawa’s CEO Ashish Singh Joshi, he revealed “Commercial fuel which is available is classified as E10, which even though it can have up to 10 percent ethanol, it’s just got 8.5 percent currently. Even ARAI, when they test, test with E5. So blended fuels are on. From a tech perspective, I think engines are able to handle. It is the rubber, the oil seals, the gaskets which need to be worked upon….”

Ethanol has a corrosive effect on parts like rubber and gaskets, so the only engineering efforts needed would be to use a different grade of materials for parts that are susceptible to corrosion, whereas the rest of the components can remain untouched. Hence, the R&D cost that would incur would only be a fraction of what electrification, which is a completely ground-up endeavour, will involve.

As per Niti Ayog and Ministry Of Petroleum And Natural Gas’ report on the roadmap of ethanol blending in India 2020-2025, India’s net import of petroleum in 2020-21 was 185 megatonnes (or 185 million tonnes) which cost USD 55 billion (about Rs 4.48 lakh crore at today’s exchange rate). The report also mentions that most of the petroleum consumption was for transportation, so successfully implementing a 20 percent blend of ethanol to petrol can save the country USD 4 billion a year, which is around Rs 32,000 crore in today’s value. This also helps the country be less dependent on foreign sources for fuel, especially in an age where we’re dealing with a pandemic and the economic repercussions of political instability on a global scale.

In line with the Government’s Flex Fuel initiative

As per the government’s E20 roadmap, it plans a “phased rollout of E20 from April 2023, its availability by April 2025;” and from April 2023 onwards, the rollout of E20 material-compliant engines and E10 engine-tuned vehicles is planned to commence. The roadmap report also states “these vehicles can tolerate 10% to 20% of ethanol blended petrol and also give optimal performance with E10 fuel. These vehicles would run on E20 only and will provide high performance.”

In order to achieve these targets, manufacturers will have to commence phased roll-out of flex-fuel-engine-equipped products at the earliest. When it comes to Indian two-wheelers, TVS was the first to jump onto the flex-fuel bandwagon with the Apache RTR 200 Fi E100, a sporty motorcycle capable of running completely on Ethanol. You can read everything about the bike here. Honda also isn’t too far behind as it had recently revealed its plans that include both flex-fuel and electrification in the coming years.

Another major advantage of ethanol or flex-fuel powered vehicles would be the reduction of emissions. As per Automotive Research Association of India’s (ARAI) 2016 report on material compatibility and emission performance measurement with ethanol blended gasoline (E20), use of E10 fuel offers a 20 percent lower carbon monoxide and hydrocarbon emissions compared to gasoline. On the other hand, the use of E20 fuels results in as much as 50 percent reduction in carbon monoxide emissions whereas the hydrocarbon reduction remained the same, at 20 percent. Summing up, flex-fuels do burn cleaner, at least as far as regulated emissions are concerned.

Gives a boost to local farmers

Being an organic compound, ethanol can be synthesised from plant-based sources. Sugarcane farmers can produce ethanol by the fermentation of sugarcane juice and molasses. While sugarcane is a water-intensive crop, ethanol can also be produced from less water-intensive grain-based alternatives like maize and surplus rice. Providing suitable incentives to farmers should also ensure extra income.

All in all, flex-fuel seems to be lucrative if given the right kind of push, and can go a long way in minimising the environmental impact of fossil-fuel-powered vehicles. Brazil and several European countries are already adopting it on a wide scale, so it’s only a matter of time that India does too, if its E20 targets are met.