The Honda Activa 6G doesn’t seem to have made a perfect start as the 110cc scooter was recalled for a faulty rear suspension bushing. Head here to know if your scooter is affected.

Honda launched the BS6-compliant version of India’s most popular scooter in January, and it has received a minor price hike as well. The base Activa 6G is priced at Rs Rs 64,464 which makes it nearly Rs 8,500 more expensive than its predecessor, the Activa 5G. The Activa 6G DLXretails for Rs 65,964

The engine isn’t just a BS6 update, it’s an all-new motor that now displaces 109.51cc, features fuel-injection and produces 7.79PS at 8000rpm and 8.79Nm at 5250rpm. In comparison, the Activa 5G was rated at 7.96PS at 7500rpm and 9Nm at 5500rpm from its carburetted engine. On the upside, Honda claims a 10 per cent increase in fuel efficiency over the BS4 Activa. This is an area where the Activa 6G has made a step forward. The front suspension now comprises of a telescopic fork rather than the previous trailing-link setup. At the back, it gets a hydraulic monoshock and for the first time, the Activa features an adjustable rear suspension. While the front wheel is now a 12-inch unit, unfortunately, there are no alloy wheels or disc brake on offer, so you have to make do with steel wheels and drum brakes at both ends

The two variants on offer are STD (Rs 63,912) and DLX (Rs 65,412), with the only difference between them being the LED headlight available on the higher variant.

5G? 6G? See one on the road and you might find it hard to tell them apart because of how similar they look. What’ll help you is the 12-inch front wheel and telescopic fork on the 6G as well as a redesigned tail lamp. With the new changes it does look very similar to the Activa 125 BS6.

Sadly, despite the price hike, the little Activa has lost out on semi-digital instrumentation that was available on the Activa 5G. On the upside, an external fuel-filler cap is finally on offer, though it’s functioning is a little counter-intuitive. The LED headlight (optional) and CBS have been retained while an ACG started, engine kill switch and integrated pass switch have been added.

The Activa's most formidable competition comes from the TVS Jupiter and Hero Maestro Edge.

Some names are synonymous and generic with the products they represent. Take Maggi, Xerox, Band-Aid, Bubble Wrap and even Google. When it comes to scooters there’s only one: the Honda Activa. The Activa not only revived the scooter segment but also made commuting less tedious. Such has been its popularity that it remains the highest-selling two-wheeler in India.

Now we’ve got its latest iteration: the Activa 6G. It gets a new engine, interesting features and revised underpinnings. Are these updates enough to maintain the Activa’s popularity among the masses? 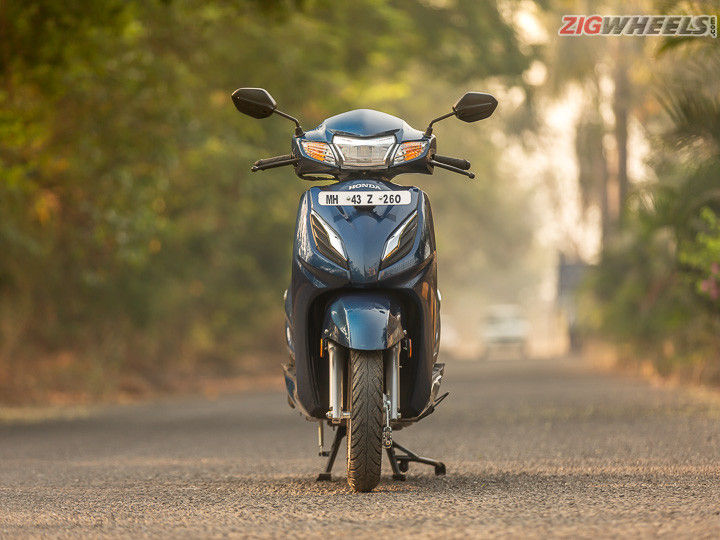 Look at the scooter dead straight and you will be hard-pressed to differentiate the 6G from the Activa 5G. That’s because Honda wants to maintain the “Activa face.” While I do understand brand recall, I personally feel that Honda needs to move on and give it a fresh identity. The easiest way to distinguish the new scooter from the older one is the larger 12-inch wheel and the new telescopic fork up front. 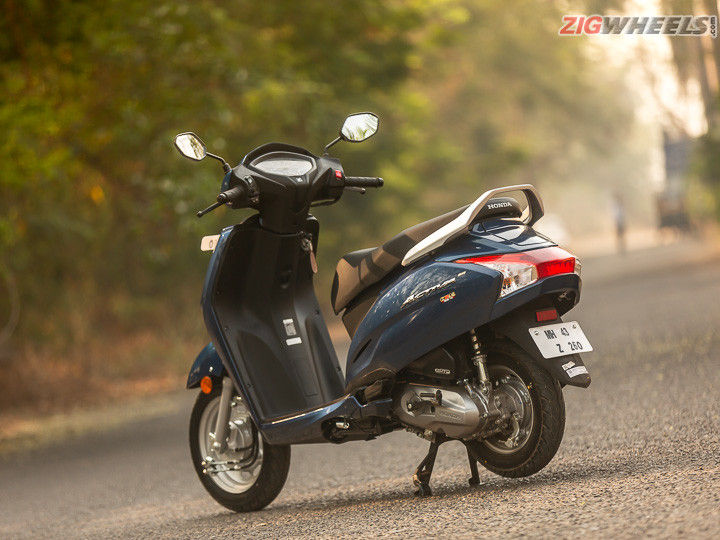 The rear, though, is completely new, and now looks similar to the current Activa 125. The new tail section means that the 6G is bigger in size than the older scooter and while the wheelbase has also increased, it’s now 2kg lighter! The telescopic fork gives it a better stance but the Activa 6G still misses out on alloy wheels. The overall styling isn’t striking or unique and the 6G will be easily lost in the sea of Activas you’ll encounter everywhere in the country. Come on, Honda, you could have done better! 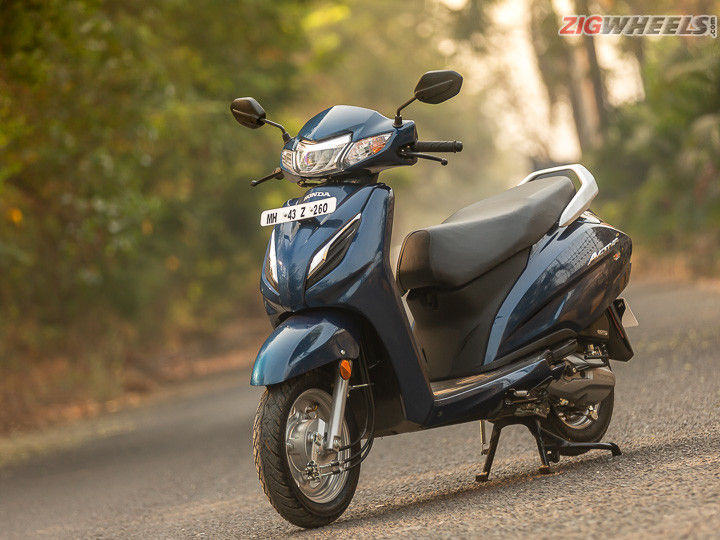 The new 110cc scooter is available in two variants: Standard and Deluxe. The one we rode, the Deluxe variant, features an LED headlight, while the standard gets a halogen headlight -- both DC units. Honda has added halogen headlight to the base variant to save costs as the base variant of the Activa 5G was running LED headlights. Activa owners will be happy to know that the 6G continues to sport an all-metal body. 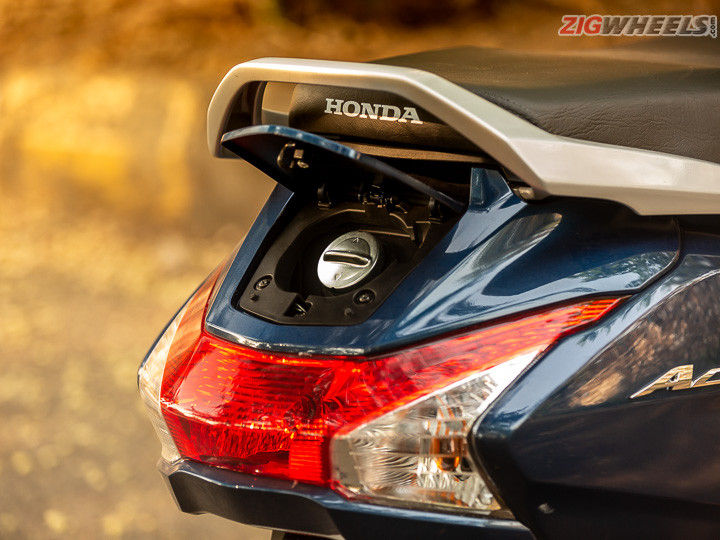 Historically, Honda hasn’t been particularly proactive when it comes to adding features on the Activa -- barring the 5G, which surprised us with its LED headlight. As for the 6G, it gets an external fuel filler cap, something that the TVS Jupiter had since its inception around seven years back. However, unlike the Jupiter, here you can open the filler cap using the conveniently located switch next to the keyhole. An interesting addition is the ACG starter motor which starts the scooter in a very quiet manner. 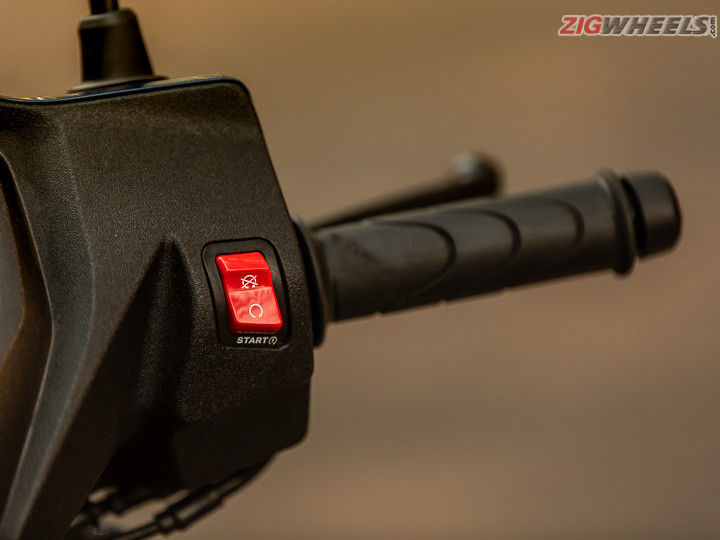 Other new additions on the scooter include an engine kill switch and a pass switch. The instrument console is now a fully analogue unit, a surprising step back from the semi-digital unit in the older scooter. The seat can be opened from the switch next to the keyhole itself and, at 18 litres, storage space remains identical to the older scooter. While Honda has added some new features on the new 6G, the fact that it misses out on a USB charger and an underseat storage light even now is disappointing to say the least. Maybe the Activa 7G or the 8G might get them hopefully. 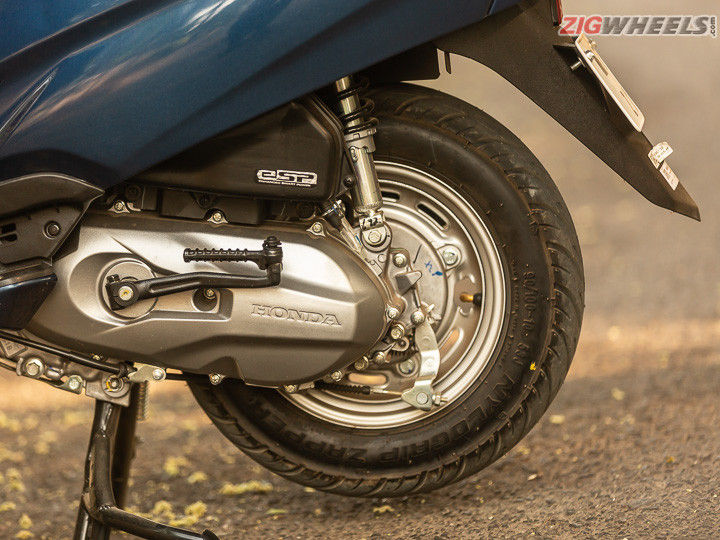 On the mechanical front, the Activa 6G gets a new motor that has a longer stroke and reduced bore than the older engine. The 109.5cc, single-cylinder mill produces 7.8PS and 8.8Nm of torque. It’s also BS6-compliant thanks to fuel injection. Despite being friendlier to mother nature, the new engine hasn’t lost out much with respect to power and torque output. 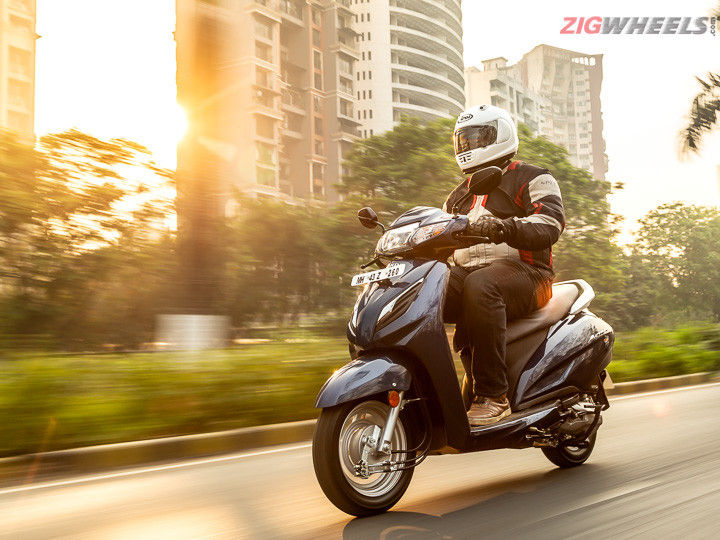 The inclusion of fuel-injection means that the throttle response is now more direct and the 6G feels peppy, at least up to 40kmph. Post this, the engine loses steam and it gains momentum in a rather lazy manner. Cruising speed is around 60-65kmph, after which the scooter struggles. 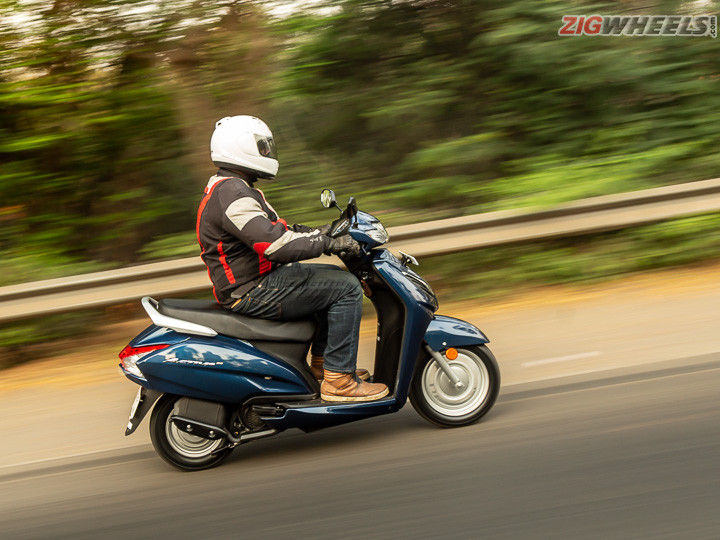 One of the main reasons for the popularity of the Activa was its engine refinement, and the 6G continues this tradition and it’s definitely the new benchmark of the segment. The motor does full justice to the Honda badge and only at high speeds can you feel a minor buzz around the footboard. Honda claims that the new engine is 10 per cent more fuel efficient than the older Activa. We shall verify this claim when we get the scooter for a proper road test. 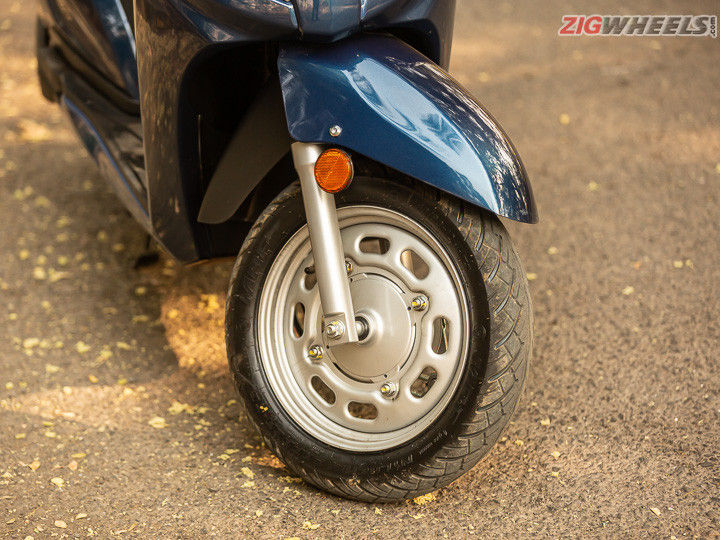 A major update on the new Activa 6G is the inclusion of a telescopic fork -- Welcome to 2020, Honda! The older Activas felt jittery on broken roads thanks to their trailing front suspension. Coupled with the 10-inch wheels, it was rather easy to lose the front on them, resulting in falls. 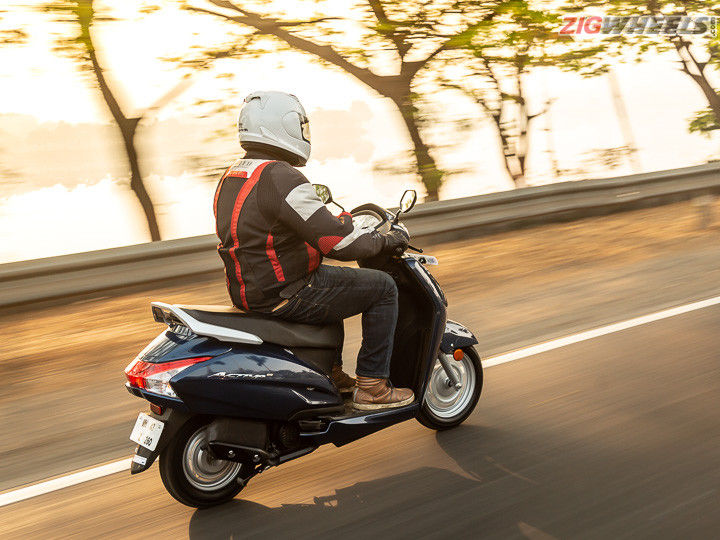 Gladly, Honda has also equipped the new scooter with a 12-inch front wheel that adds more stability. While the telescopic fork has helped improve it, overall ride quality is still on the stiffer side. And the Activa now features an adjustable 3-step monoshock for the first time. Tuning it could’ve probably improved the ride quality but since we only had a brief time with the scooter, we couldn’t change the suspension settings to check that out. 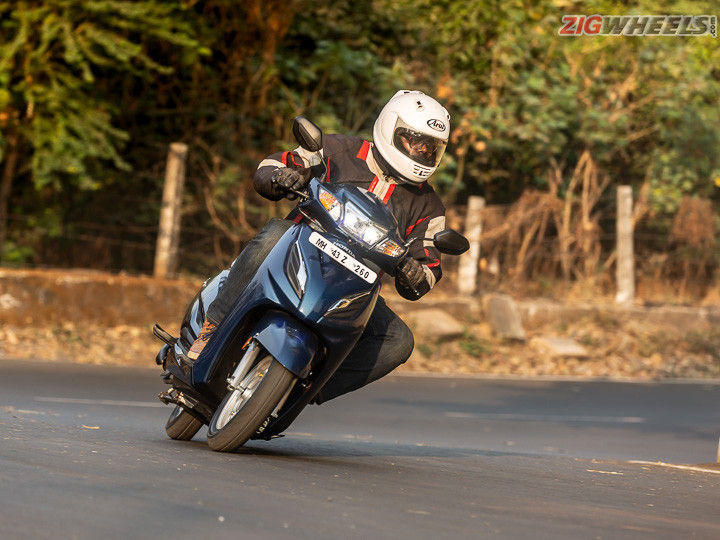 Despite the increase in wheelbase (plus 22mm), the 6G doesn’t feel lazy to steer and turns in very easily. It feels as agile as the older scooter and riding in city traffic is effortless. The larger front wheel also adds stability and gives you more confidence if for some reason you want to imitate Marc Marquez. 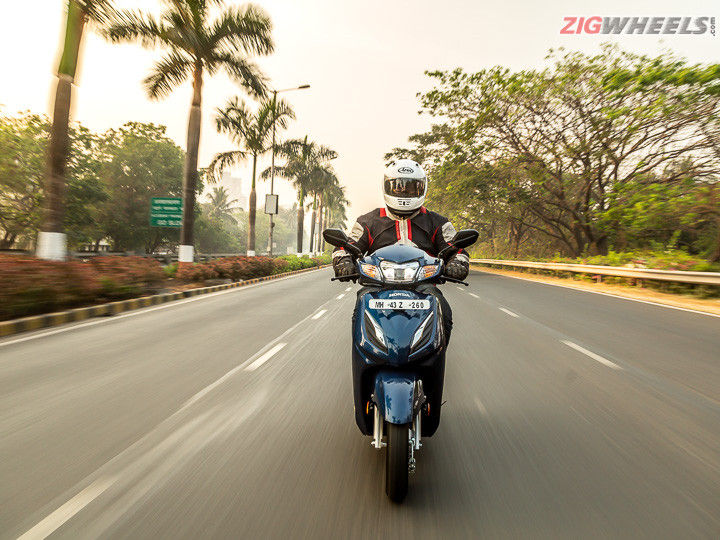 Braking hardware still consists of drum brakes at both ends and they offer decent bite working in conjunction with CBS. While I agree that disc brakes increase cost, they should have at least been offered as an option for the sake of safety. 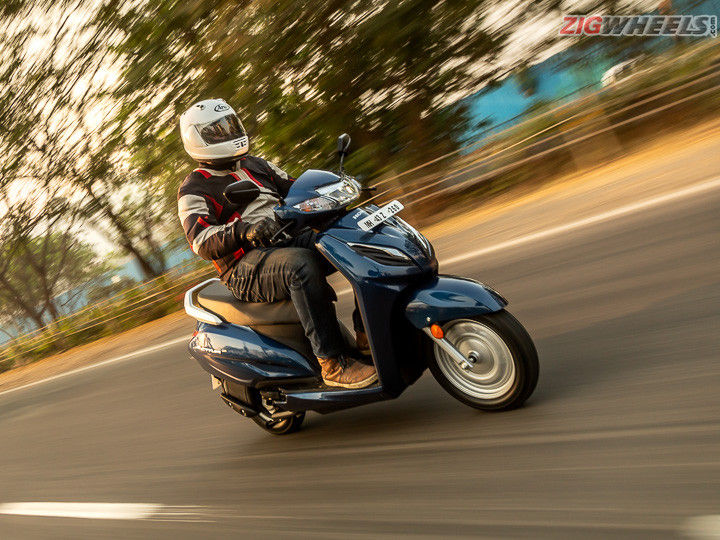 Priced at Rs 63,912 (standard variant) and Rs 65,412 (deluxe variant), the new Activa 6G costs around Rs 8000 more than the older scooter. (Note: Both prices mentioned are ex-showroom-Delhi). That's a lot of money, but then that's the cost of BS6. The 6G remains a good option for point A to B commuting and it has the most refined motor in its segment as well. And if Honda's claim is to be believed it's going to be frugal too Honda Activa 6G Price.

But to be honest we were expecting more from the Activa 6G. We were hoping it would get better styling, more features and be a step up in general.

So is it the best 110cc scooter on sale in India? For that, we will have to compare it against the BS6 TVS Jupiter. So stay tuned for that crucial shootout before making up your mind.

Q. Activa 6g tail light cover mil skta hai home delivery
Q. Activa 6g dram prices
Q. What extra features one get delux anniversary model?
Q. I wants to change my aviators front &rear wheels with 14 inch wheels for front &12 inches with rear?
Q. Which is the best scooter in Honda regarding to mileage and looking?
Q. Can we buy activa Online and get delivery directly to our door step. Payment via online . Ecom in vehicle delivery. Or can you suggest me any website which does this
View More Questions
Q. When will Activa 7G will be launched in India? View All Answers
Q. Which scooter is better Activa 6G or TVS Jupiter is the latest, please tell me the latest variants in TVS Jupiter . View All Answers
Q. What is the schedule for Activa 6G servicing? How many servicing are free? View All Answers
Q. What is the difference between Activa 6G STD and Delux? View All Answers
Q. I have heard that the fuel caps and seats on the Activa bs6 scooter did not open properly after a few months of use. Is this right or wrong ? I decide to buy a scooter within a budget of 1 lakh. Please suggest me which scooter is the best Activa or Access or Jupiter or Dio or Facino? I hope for your suggestion sir. View All Answers
Q. Does Honda Activa 6G have charger point for charging mobiles? View All Answers
View More Questions
All Activa 6G Questions and Answers

What is the price of Honda Activa 6G?

What is the mileage of Honda Activa 6G?

Does the Honda Activa 6G have ABS?

Which is better Honda Activa 6G or TVS Jupiter?

What is the EMI of Honda Activa 6G in Delhi?

What are the colours available in Honda Activa 6G?