This scooter set in motion a new outlook towards commuting, becoming an example like ‘Sharmaji Ka Beta’ 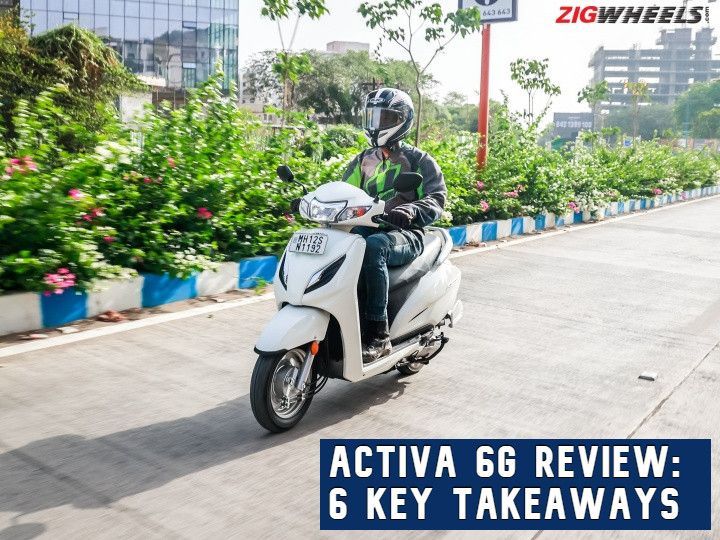 The Honda Activa is not just a scooter. It’s a mindset. Let me explain. See, over the last two decades, it not only changed the way the Indian family looked at scooters, it also allowed all members of the family to commute with a sense of ease.

The design was as gender neutral as a pair of Crocs, powerful enough to impress dad, convenient enough for mom to use daily, and cool enough for kids to ride to college. Its formula was simple: ‘Thoda sabh ke liye.’

Now, the Honda Activa 6G heralds two decades of the Activa moniker in India. We’ve finally ridden it, and here are the key six C’s you need to know about this Activa 6G.

Looking at this scooter is like looking at your old college photograph. Yes, after 20 years it’s easy to spot the differences, but it still feels so familiar. The 6G now takes after the bigger Activa 125 in design and the fresh look is a welcome change. It still gets bodywork made from metal, and the sound of metal is always somehow reassuring–it’s perceived as the sound of reliability. So it’s a good thing then the Honda Activa still retains that sturdy appeal, and the fit finish levels are pretty good too.

It’s Convenient:
They say, with age people become wiser, learning to do the same things more efficiently. Two decades down, the Activa 6G has learnt a few neat tricks.

Now you get this little switch next to the key slot. Push up to open the external fuel filler cap. You no longer have to open the boot to fill fuel. Push down on the switch and you pop the seat up to access the 18-litre underseat storage compartment. That said, I wish Honda had given it a USB charger and at least an underseat light. It would make rummaging through stuff in the dark a lot easier.

With age people tend to get slower. They tend to spend more energy to be just as efficient as they were before. We wanted to see if the BS6 transition had a similar effect on the Activa. And so, we ran some tests, and as you can see the Activa 6G, is just as frugal and peppy as before.

This 110cc fuel-injected engine churning 7.79PS and 8.84Nm may deliver a teenie bit less power than before, but it’s barely noticeable out in the real world. Moreover, while the Activa 125’s engine felt a little short on emotions, this still offers that little thrum, making it feel alive.

Mechanically, one of the most significant changes on this sixth generation Activa is this bigger 12-inch rim and telescopic fork. On our poor city roads or highways even, this setup does well at handling the undulations and you get a much better ride quality than before.

Out on the road, the Activa 6G demands relaxed and sedate riding. The handlebar is easy to reach, you sit nice and upright; the seat is wide and the padding pushes the comfort levels further up. Even the step up to the pillion seat is gentle, getting on or off does not require you to be all stretchy like a yoga teacher. This isn’t a sporty scooter afterall.

See, it’s 2022 and we’re now a bit spoilt for choice. Today, digital consoles and Bluetooth connectivity are almost standard features on scooters. Yet, this gets a basic analogue unit. Surprisingly, though, even the Honda Activa 5G had a small digital display. Wonder why it had to go on this iteration.

Also, I wish the rims didn’t look this basic. Alloy wheels and a disc brake at the front would have really amped up the appeal and safety. Yes, you get combi-braking and the stopping power is more or less the same as before, but, it could be a whole lot better!

For a scooter that’s two decades in service and is meant to appeal to all members of a family, the Activa 6G still manages to look fresh somehow. The engine still has a zing to excite while maintaining its stress-free and frugal nature. It scores incredibly well on comfort and convenience, no wonder then the Honda has managed to hit its competition out of the park, or should we say a sixer, with the new Activa 6G.