Little Red goes for a weekend trip to Mumbai and comes back to Pune. All in 24 hours! 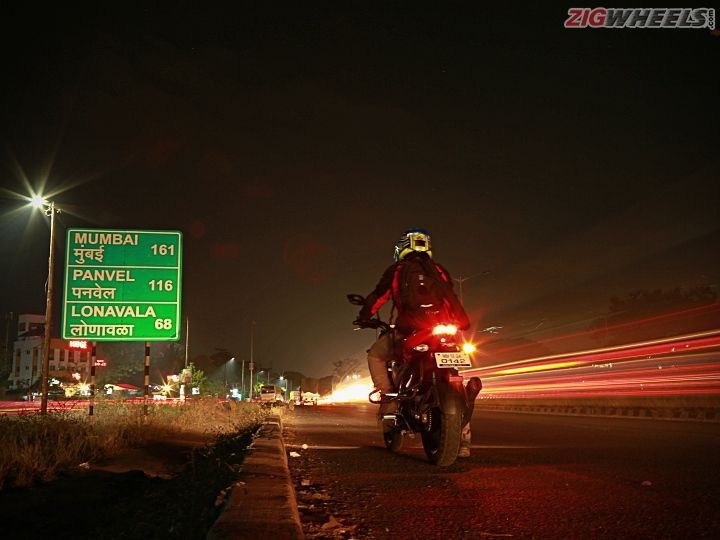 What could have been better

In the past, our long-term TVS Apache RTR 160 4V Carb has tackled city duties, an oil change and gone for a morning workout with some friends. This time, she decided to stretch her legs and take on an unplanned ride to Mumbai. This involved going to the Mumbai airport, picking up a friend, spending the day and then coming back the same night, covering 350km in 24 hours.

The friend's flight was scheduled to land at 7 am. With Google Maps showing close to four hours of travel for the 158km route, we (Red and I) decided to leave at 3 am. A few things on my checklist were to ensure the tyre pressures were accurate, check the bike's paperwork, toolkit and first-aid kit, a clean helmet visor, prep riding gear and the most important, get at least five hours of sleep. Having prepped everything in advance, we managed to leave a few minutes before time and subsequently made a fuel stop and topped off the tank. After that, it was a non-stop push to our destination.

The Mumbai-Pune expressway does not allow two-wheelers, which leaves bikers to use the old highway. After just a few kilometres, the street lights began to fade away and I was left relying on the Little Red's beam and my memory of the route from the numerous highly fuel efficiency tests done in the past under the sun. As a result, the first 45 kilometres were done swiftly. But soon I realised that the spread of the low-beam was very limited, forcing a switch to high beam when there was no oncoming traffic. Though the low beam leaves you wanting for more, the high beam more than gets the job done. The 12V, 35/35W HS1 bulb of the carb variant is less powerful than the 12V, 60/55W H4 bulb of its FI counterpart.

On the straights, I was sitting comfortably at 80-85kmph with the engine barely breaking a sweat despite being close to 6700rpm. The butter-smooth motor kept vibrations to a minimum and left a lot of room to open the throttle for some quick overtakes. But soon after that, the bike started to feel a bit out of breath. At 100kmph, the engine was doing close to 7600rpm and started to feel a bit stressed from there onwards. The ideal cruising speed lies somewhere in between 85-95kmph, which is pretty good for a 160cc motorcycle. Also, the shift light comes up at 90kmph in the 5th gear, which does feel a little early given the bike revs all the way till 12,000rpm.

About 60km into the journey, just past Lonavala, you hit the ghats. Now, we have already spoken about the handling and the dynamics of the motorcycle in the last long-term report, so I am not going to bore you again. But what I would like to mention here is the average headlight performance. The limited spread, especially the length of the beam, left me guessing the length of each corner on the road. But nevertheless, the beefy mid-range torque occasionally put a smile on my face while throttling out.

One important aspect of the bike I would like to touch upon is its ergonomics. Covering the first 160km did not cause any physical strain. The upright seating position, the ample seat cushioning and the mid-set footpegs lets you relax on long journeys. The seat cushion needs a special mention as it remained comfortable throughout the journey to Mumbai. While this did not come to me as a surprise, what did come to my notice is that it remain comfortable even for the return journey. Having ridden at night, spent a day in Mumbai and riding back, I was feeling a little tired, but the bike did not cause any major fatigue and remained very comfortable even on the way back.

Also worth mentioning here is the ride quality. A few unexpected broken roads and speed breakers did greet us on the way, but the bike maintained its composure. Once you are down to 30-35kmph, the Showa suspension lets you tackle them without making the bike jittery or uncomfortable. While coming back, the roads were more familiar and I was a lot more confident with the throttle, making it more fun. Once again, the strong midrange lets you move past traffic quickly and with the rays of the early sun gracing the ghats, Little Red kept a smile on my face all the way home.

At the end of the round trip, Little Red’s fuel counter showed three out of the eight bars. A quick fill up at the next petrol station revealed a fuel efficiency of 40.8kmpl. With a long-ish road trip under Little Red’s belt, it’s time for it to receive a little TLC. Stay tuned to know more about Little Red’s trip to the service station.