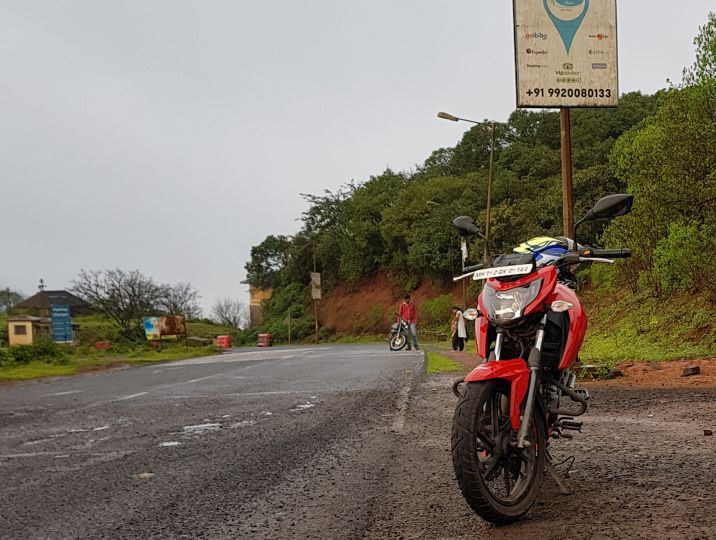 Buying a sporty commuter is not just about cutting through traffic. It's also about going out on planned or unplanned rides with friends to blow off some steam of the daily grind. And while our long-term Apache RTR 160 has done the Lavasa climb multiple times for various shoots, this was the first time it was there purely to have some fun.

The issue with the cold start is one I still haven't got used to. You have to blip the throttle for the first start and then the headlight blinks for a while before turning on and the rpm settling down. But this takes approximately 45 seconds to a minute, which would be the warm-up time for any other bike.

Reaching the bottom of the hill from my place is a 20km ride, which is done before the sun wakes up. This ride on my personal bike, a 2008 Yamaha R15, becomes a little tedious because of the average headlamp performance. And while the lamps of the Little Red aren't the best, they do a good job of lighting up a wide patch on the road. Also, because the rain gods were feeling generous the night before, the approach roads were wet. Luckily, the Apache runs on TVS Remora rubber which maintains good grip on partially wet surfaces. It’s only under fully wet conditions that the tyres begin to struggle for grip.

Time for some fun!

Accompanying the Little Red was another one of our long-termers, the Yamaha FZ25, ridden by our in-house bike racer, Amar, and a Kawasaki Ninja 400which we had received for a road test, being ridden by the Editor himself. Hence, not only did the Apache have a power deficit in this group, there was a bit of talent deficit on my bike as well.

Luckily though, on the straights, the Apache’s beefy midrange torque helped me keep up with the larger capacity bikes. It's between the 3,500-6500rpm mark that the bike feels the most lively (peak torque of 14.8Nm is made at 6500rpm) and even small throttle inputs make considerable momentum changes. The engine refinement lets you pull the revs close to the redline without any significant vibrations, but there is not much power there and a shorter shift usually works much better.

It's on inclines, especially on hairpin bends, where the bike struggles. The lack of torque at the bottom end makes you often shift to the first gear to get the bike going. Similarly, even on straight inclines, you will have to short-shift to keep it in the power band and maintain a quick pace. The bike is clearly tuned for the city, with a strong mid-range, and this takes a bit away from the experience on the hills.

But if you are able to get it in the right gear while approaching a corner, the Apache is quick to lean it, and lets you keep it there throughout the curve. It is a bit too quick to tip in actually, but it's easy to get accustomed to and have fun with. The bike does feel a tad bit heavy when transitioning from corner to corner, but again that is something which works in favour of a novice rider, giving more time and confidence to get the line correct without being intimidating.

While coming down the hill, the tyres were up to temperature and allowed me to carry more speed on exits. But, you have to be careful while braking as, under hard front braking, the load shifts to the front and the rear has a tendency to lock up easily. Rely mostly on the front and you will be just fine.

A thing I noticed after this ride was that the red had been a little thirsty. Though I was unable to get a reading of the mileage this time, it's on my to-do list for the next ride. Even when it comes to posing, the Little Red has her own charm. Surrounded by bikes of a category above, she doesn't look like a smaller motorcycle and holds her own.