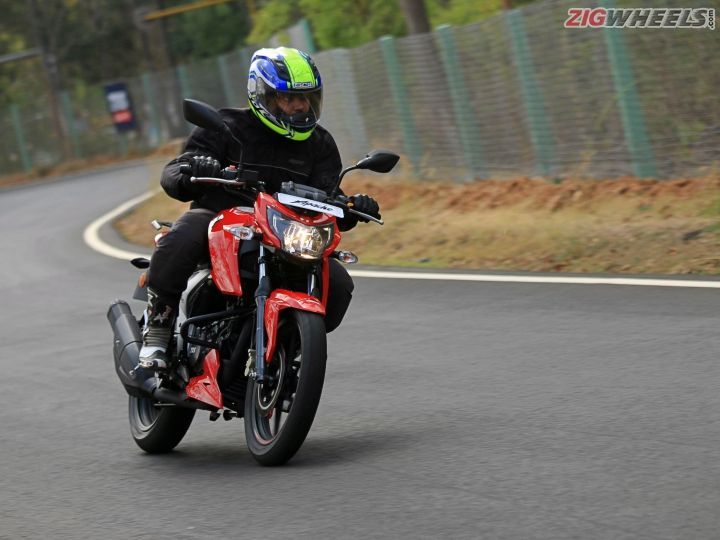 It was Thursday, April 26, 2018, and I was taking out my frustration on a keyboard. Why, you ask? Because that was the day I was about to be assigned a long-termer, one that I found absolutely pointless and redundant. It was certain Italian scooter which was made more ‘affordable’ by an engine downsizing. Priyadarshan, our Assistant Editor, calls me to the parking lot. I remember walking extra slow, thinking of ways to politely refuse the offer. I get there and to my surprise see no Italian scooter. Instead, it is a spanking new motorcycle. The day suddenly took a bright red turn.

This was probably the honeymoon period where we were getting to know each other. Straight off the bat, the most impressive thing about the TVS Apache RTR 160 4V was its refinement. This is the smoothest engine in the 160cc space and makes city rides very effortless. It’s fast too. In our tests, Little Red managed to be the fastest bike to 60kmph in its segment. But in the first week itself, I realized that the turning radius of the bike was a little too big and that meant an extra few turns in the parking lot. Also, while the front disc brake offered decent feedback, the rear was a little too eager to lock, especially on wet or dirty roads. The first service I got done of the bike was in fact its ‘second service’ which, inclusive of an oil change, amounted to Rs 912.

Being the motorcycle enthusiasts that we are, every bike has to go through the infamous Lavasa hill climb. The RTR 160 4V had the company of a Kawasaki Ninja 400 and the Yamaha FZ25 on the day it went up. While it was the least powerful bike out there, it did a commendable job keeping the others in sight, for some time at least. Off-the-line grunt and a strong mid-range - those were the most impressive aspects of this RTR. But the bike becomes a little too flat at the top of the rev range and this amplifies while going up a gradient. This means you often have to short shift in order to maintain momentum. Also, when going downhill, you need to be easy on the rear brake as its tendency to lock up increased with the front under load. Overall, the handling and stability remains impressive and the bike is quite fun around a set of corners. One thing which I noticed while riding flat out was that the gearbox wouldn't downshift smoothly at higher rpm, even with a blip of the throttle.

By now, I had a much better idea of what the bike packed inside the city. It was my daily driver to the office and everywhere else. Its strong points were still engine refinement, ease of handling in the city, balanced ride quality and a comfortable saddle. Little Red now had me falling for it and I would happily pick it for my daily chores over any other bike that came to office. But at the same time, there were a few small and irritating bits as well. For example, the left rear-view mirror kept on getting loose and the rubber cover too kept slipping off. Also, there was an ever prevalent issue of cold starts. The bike required a gentle twist of throttle along with the starter to fire it up every morning. This for a modern day 160cc bike feels like a bit of a letdown. Also, It developed an issue where it started to hold higher revs (close to 3,000rpm) once the engine heated up. This was prominent in city in heavy traffic conditions.

A surprise call from a friend meant I had to leave Pune in the middle of the night for Mumbai, and return the next morning. This meant putting Little Red to the test on the highway, at night. As always, the bike was up to the task and remained very comfortable throughout the journey. The ride didn’t become bouncy on the highway and kept the bike stable over some of the broken patches as well. The engine let me cruise comfortably till 90kmph, but beyond that the motor started to feel stressed and vibrations started to creep into the footpegs too. A big disappointment was the headlamp which failed to illuminate enough of the road in the dark. I often had to shift to high beam, which wasn't up to the mark either.

Red isn't an ordinary bike, in the sense that she is a ‘media bike.’ Hence, she doesn't follow the standard service schedule of getting a free first and second service and so on. Instead, it gets a fix-all-issues service in which the bike gets an oil change, chain cleaning, etc. Hence, TVS refused to share the bill with us. In this service, I had mentioned the cold start and the rpm-holding issue, but sadly both of them were not fixed. The regular oil change and maintenance was done quite nicely. But the rest, not so much. The rpm issue did reduce, but the cold start problem did not budge. While we did not get a bill, the job card mentioned the total amount to be Rs 776, which was pretty sweet. Later, the low-beam bulb stopped working as well but was fixed on a quick visit.

Riding with a pillion is an important aspect for many, and when my colleague borrowed it for a trip to Mumbai with his wife, I got some interesting feedback. After testing it out myself, I was even more impressed. Even with two people on board, the bike did not feel underpowered inside the city. The strong mid-range helped it keep up with traffic while the well-padded single seat kept things comfortable and offered ample space as well. It's just that with the pillion, the ride does get a bit bouncy and the pillion footpegs are high and rear-set, which does result in fatigue over longer journeys.

She is a sweetheart. I must have recommended the RTR 160 4V to more people than I can remember. It is surely the best balance between a frugal commuter and a college-goer’s sporty ride that you can buy right now. Its combination of easy-going nature and oodles of performance when you open the taps ensures that pretty much anyone can enjoy the experience. There are a few issues that you will have to learn to live with, but they are well worth it for the butter-smooth motor and the way it goes, sounds and looks. I will truly miss Red now that she has left our long-term garage. The silver lining, though, is that one of my colleagues has decided to bring her home, which means I will still get to see her from time to time.

Farewell Little Red, you will be thoroughly missed.
Thank You.

Reasons not to buy