Can Hero's 125cc family scooter be as good as the Suzuki Access 125? 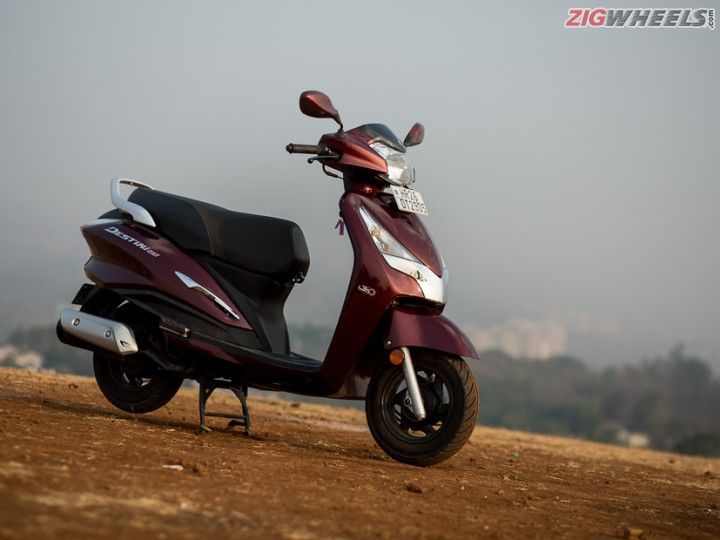 When it comes to scooters, 125 is the new 110, isn't it? There are a plethora of options in India that cater to a variety of audiences. If you are a teen-at-heart, sporty scooters like the TVS NTorq 125 and the Aprilia SR125 are apt for you. If you're a bit flashy and like a little bling from your ride, then you've got the Suzuki Burgman Street, the Honda Grazia and obviously the Vespas. But if things like practicality, fuel efficiency and comfort are decision-making factors, family scooters are what you should look out for.

The king of family 125s continues to be the Suzuki Access 125. Hero has a contender for the Access called the Destini 125. Should you pay heed to it?

Only scooter in the country to get…
Start/stop tech is not something alien to Hero products. We have seen their patented i3S system work like magic on their motorcycles. However, this is their first, as well as India's first, scooter to get this fuel saving aid. The system kills engine ignition automatically upon coming to a halt and can come back to life as soon as you want to set off.

The procedure to get this system working on the Destini is a bit different compared to its motorcycles. When you do halt, most likely at a traffic signal, the i3S takes 5-6 seconds to kick in. To set off, you need to pull in either of the brake levers and give a gentle throttle input to bring the engine back to life.

The system is a bit irksome on the Destini and doesn't feel as seamless as the ones on its motorcycles. Grab a handful of the throttle and you run the risk of flooding the carburettor. At some traffic stop-go scenarios, it was best to shut the system off completely. But the whole point of this system is to deliver better fuel efficiency. So, does it?

Fuel efficiency isn't the best but fairly commendable
Returning 48.36kmpl in the city, the Hero Destini 125 isn't the most fuel efficient 125cc scooter that we've tested. It does outdo the likes of the Honda Grazia and the TVS NTorq 125 marginally but the Access is still far ahead. But things change drastically at highway speeds, where the engine feels a little bit stressed. So riding constantly at about 60-65kmph on the open road, the Destini’s fuel efficiency drops to just 47.8kmpl, which is fairly behind its competition.

Pleasantly surprised with the performance

Let's start with the brochure numbers. The 125.6cc engine makes a modest 8.83PS and 10.2Nm. That's a shade better than the Access but it also tips the scale at 111 kilos, 10kg heavier than the Access.

It was nice to discover that the Destini could match the Access in acceleration. 0-60kmph was done in 9.27s; the Access was 0.07s quicker. Surprisingly it recorded 98.71kmph in our top speed run, making it the second fastest 125cc scooter we’ve tested after the NTorq and miles ahead of the Access. In real-world roll-on acceleration (20-50kmph) too the Destini actually managed to come out ahead, managing the run in 4.61s vs the Access’ 4.65s.

Enough numbers. How does it feel to ride?
The potent engine is met with a similarly taut ride setup. The underbone might not be something new but the suspension tuning is on the firmer side. Hero’s primary aim with the Destini was to make it a great people carrier, facilitating two-up riding. Hence, with a pillion (i.e. with the suspension loaded), the scooter takes in small bumps nicely. If you are riding solo and are on the lighter side, the same bumps can feel uncomfortable though.

Another factor for the discomfort is the smaller 10-inch wheels. We have been spoiled by the 12-inch front wheel on most scooters. The return to 10-inchers does send us back in time. With these, there are more forces transmitted back to the rider and those bumps on bad roads feel like big, heavy thuds.

There are drum brakes at both ends. While the Destini 125 stops earlier than the Access in the run from 60kmph to naught (20.03m for Destini and 20.44m for Access), the addition of disc brakes could have shortened the stopping distance further. Still, the package as a whole is pleasantly sprightly. It does have an Integrated Braking System (linked brakes), and that is a great thing because…

It’s the most affordable 125cc scooter in India
At Rs 54,650, the Destini 125 is the cheapest 125 on sale in India. That said, the variant we tested was the VX, which comes with alloys, side chrome garnishes and a few underseat features which are mentioned later, bumping the price up by roughly three thousand rupees. Although it might not be a necessity, the alloys do look stylish. However, one should keep in mind that India’s best selling scooter, the Honda Activa 5G, costs Rs 56,071, and that only comes with a 110cc engine. When you take that into perspective, the Destini 125 makes a pretty good case for itself. But while you are getting 125cc performance for the price of a 110cc scooter, you are missing out on a few modern features.

Lack of modern features
In Hero’s quest to make it super affordable, the Destini 125 misses out on a couple of modern bits that one usually finds on scooters nowadays. Items like LED lighting, a 12-inch front wheel and a disc brake option are missing. The underseat storage capacity is only 17 litres, quite low for a family scooter.

It also does not look striking either. The styling feels derivative -- a few elements on the scooter feel like something we have already seen on the Honda Activa 125 or the Honda Aviator. It just does not feel unique enough to stand apart in the crowd of family 125 scooters.

It does have a few redeeming features though. Firstly, you can open the seat as well as the remote fuel filler cap from the ignition panel itself. On the VX model, when you do open the seat, you get a USB charging point for your electronic devices and a small night light to help you locate your items. These are optional on the LX model. And lastly, one cannot stress enough the importance of tubeless tyres in India, which the Destini thankfully gets.

So should this be my family 125 scooter?
Our pick for a family 125cc scooter still continues to be the Suzuki Access 125. Suzuki has hit the nail on the head in almost every department -- styling, performance, fuel efficiency and practicality. But you should give the Hero Destini 125 a chance. Firstly, the scooter was meant to really carry loads, with a nice suspension setup for two-up riding. Then it is the most affordable 125 in the market. And performance-wise, she does everything nearly as well as the Access. If these three points meet your criteria, you definitely should consider the Destini 125.

Hero Destini 125: All You Need To Know