A month of dieting followed up with a little bravery helped me achieve one of my lifelong dreams: standing on the top step of the podium 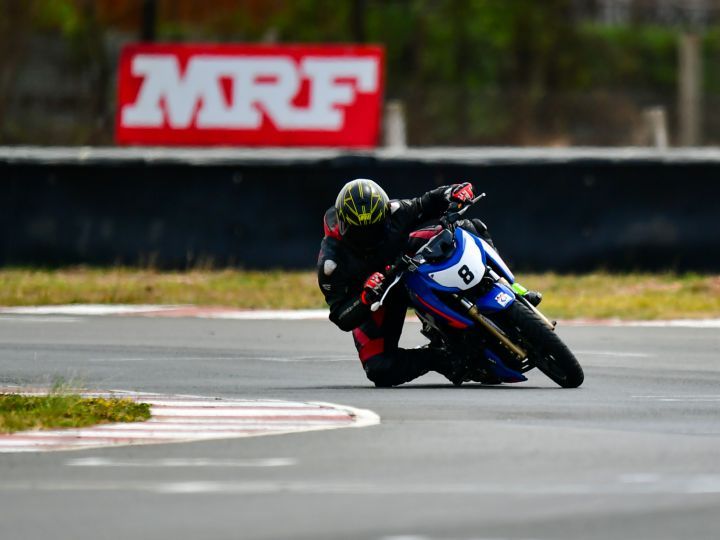 It is said that you always remember your firsts. Your first love, your first kiss, so on and so forth. I also remember my first pole position – 2 September 2018 – and later that day was my first podium. I finished second. As the bosses nominated me for this season of TVS Racing’s Young Media Racer program, I knew I had more firsts left to conquer. After being the fastest man in the first race and still losing out on the victory, I was super dejected. I did bang in the fastest lap of the race (another first chalked up), but the top step still remained out of reach.

I knew I could not repeat the same mistakes in round 2. I could not just blame my weight for settling anything below the win. I had to take some drastic measures. For a month, I survived on a daily diet of chickpeas, chicken and coffee. Sugar was my enemy. But my heft was not the only problem. It was that I needed to be brave. Brave at late braking, brave at carrying speeds my brain thought were impossible to carry and most importantly, brave in making those crucial overtakes. I would be losing out on the start, meaning I would have to fight back. Even though the MMRT is a rider’s track, the long run-up to the first corner would be enough for the swarm of angry bees around me to buzz past.

I could not have asked for a better start to the weekend. After three hot laps in practice, I had to study my opponents. Especially a couple of them who are blindingly fast. Starting with Manav Sinha from News 18. Manav had a disastrous opening weekend at Kari, wrong suspension settings screwing up his rhythm. However, he was quick at MMRT. And so was the winner of the opening round – Powerdrift’s Varun Painter. The three of us had been the fastest back during training. Natural for me to follow one of them in practice. Manav was great at getting quick drives out of slow corners, especially the start C2-C3 section and the final C10-11 section. While I saw little of Varun, I knew he had stepped his game up by a couple of notches. He would be a handful if he got away, like he did at Kari. I was third fastest in practice – with a fastest lap time of 2 minute 20.146 seconds, 0.517 seconds off Manav.

Qualifying went like clockwork. My ‘Go Fast, Don’t Die’ strategy worked brilliantly. I shaved off nearly three seconds from my fastest lap in practice. I had bagged pole position for the second time this season. Manav and Varun weren’t far behind, just 0.4 seconds separating the three of us. Even though I was in pole position, I knew the threat was not over. And this threat was just not from the front row but also the riders from the second. Motoring World’s Aadil Naik and Bike India’s Zal Cursetji are slim as a bamboo stick. These two had made lightning starts at Kari, dropping me down to a momentary fifth.

There were nerves going into the race. I ate a light breakfast, dousing down two slices of toast with lots of watermelon juice. Putting on the suit felt cumbersome and after what seemed like ages, we were finally told to get ready to go out on the grid. In a blink, I am at my grid spot and the five red lights illuminate. Another blink and those swarming bees have gone past me, demoting me to sixth as we dived down C1. Throttle pinned into the fast long right and I got two positions back. Manav was leading from Aadil and Varun. I would have to get past them if I had to climb that top step. In the run up to C4, Zal did get the better of me but I snapped back in the switchback to C5. I had never felt so confident at the long swooping right handers of MMRT as I had done this weekend on the Apache RTR 200 4V. Not only was I right on Varun’s tail but I also passed him down the inside of the big bowl.

Aadil next, I thought. But Varun slipstreamed past me again down the back straight. My good work undone yet again. Then suddenly a thud and the next moment, Manav is on the floor and the three of us are hurling down just behind him. We slowed down to show concern for our fellow colleague. Then it snapped back to the three of us, simultaneously, we were in a race. Zal had not backed down, moving ahead of me at C9. I took third back at the following corner. If I had any chance of winning the race I needed to act immediately.

I focused on getting a good drive out of the final corner, which I did get, out-braking both Varun and Aadil into C2. Yes, I took the lead, for a brief time. Being 50 kilos lighter than me, Aadil flew past me on the main straight. I had to be brave on the brakes, snatching the lead at C5. Once ahead, I just focused on running away. With a small check on every subsequent lap on the gap behind, I was in the zone.

I was inching closer to my first win. I backed off with a few corners to go. I was ecstatic as I took the chequered flag. This had to be the best first of my life so far – my first race victory. It was not as full of pomp and show as say a MotoGP weekend but to me it was perfect. It was the top step of the podium, the biggest trophy of the day and smile plastered on for the rest of the night.