How did our young racer fare in his first race of the championship? 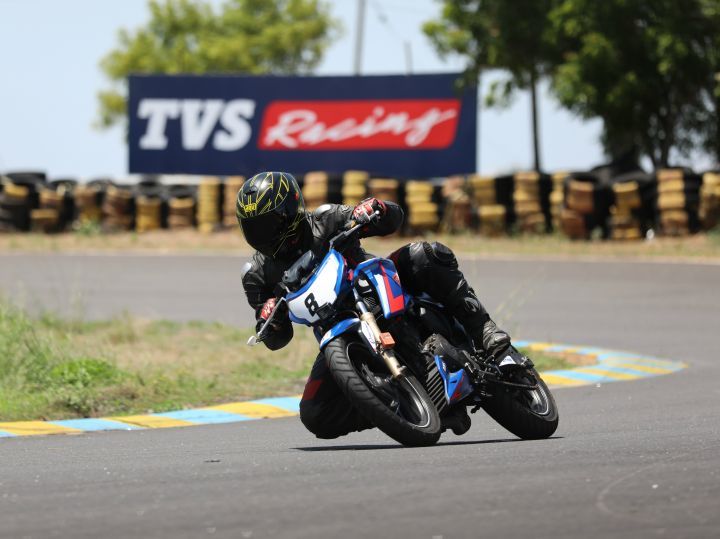 March to June was more than enough time for me to shed some kilos but I didn’t. I had been fastest at the end of our training weekend in March but just marginally. I knew I had some serious competition who were not only fast but also lighter. And just as I had feared, my weight turned out to be my Achilles heel in the first round of the TVS Racing Young Media Racing Program 3.0 held at Kari Motor Speedway, Coimbatore.

I have been to Kari on several occasions, most of them to cover races. Of them all, the ones which kick-start a season as particularly exciting. The mechanics are happy to be back at the track. The atmosphere is buzzing and the mountain backdrop of Kari just adds to the charm. With respect to our series, I was particularly buoyant about my podium hopes for the weekend. The win was not out of my grasp. My last outing at the track was in a similar media race, where I performed better than I had expected, bagging pole position and finishing second overall. So I was super optimistic going into this weekend.

As is the norm, the race-spec Apache 200s had their engines rebuilt for the start of the new season, to perform at the optimal best they can. Plus, the biggest update to the bikes was with the rubber. Since the introduction of the 200s for the one-make series, the bikes have been running the stock Pirelli tyres. For 2019, TVS Racing has tied up with TVS Tyres for all of its one-make series, including the Open championship which runs the RR 310s.

My track rustiness was evident during practice. I was braking super early, carrying slightly weird lines and not necessarily being smooth. Given the unique nature of Kari, one rarely spends much time leaned over, with two major chicanes for which one needs to be swift in changing directions. Especially the back section, fondly known as the ‘Mickey Mouse’ section, where you need to be quick so that you can carry as much speed into the penultimate corner which is a long right bowl. This reflected in my times: I was third fastest, 0.4 seconds off Powerdrift’s Varun Painter.

The result charged me up for qualifying. Drafting down Kari’s main straight would definitely help in shaving off milliseconds. I knew Varun was tailing me in the opening laps of the qualifying session. Two laps into the session, I let him go ahead and as soon as he passed me before Mickey Mouse, I tried to keep in tow. Thanks to a fantastic drive out of the final corner, I was able to slipstream Varun down the main straight. Approaching the braking marker for C1, I was able to outbreak him and then tore away at the front. I knew I had pole position. Surprisingly, it was not that lap which was my fastest but rather my last lap of the session. I broke into the 1 minute 23 second barrier, my fastest lap at Kari yet. My lap time of 1:23.899 was 0.2 seconds quicker than Varun’s.

Pole position meant little to how the race would pan out. I knew that there were at least three or four skinny journos who, if they got great starts, would zoom past me in the long run-up to C1. And my worst fears came to fruition. It was possibly the worst race start that I could have imagined, as I dropped down to as low as fifth before recovering two places by outbraking the others into C1. Much to my dismay, Varun blitzed off the line. I knew I had to make little of fast-starting Aadil Naik (from Motoring World) if I wanted to have a fighting chance for victory. Sadly, by the time I got past Aadil (at the final corner on the first lap), Varun had stretched open a sufficient gap. I did claw back whatever little I could but ultimately it turned out to be a bit too much.

Varun was the better rider on the day, winning the race comfortably. I had to settle for second. A small damper on what was nearly a great weekend as I had the fastest lap in our series as well as in the race. However, it was a great day for the Pune journos as Varun and I were joined by Bike India’s Zal Cusetji.

We now move to the MMRT in Chennai. The straights are not as long as Kari’s, which does play to my strengths. The competition is going to be even more fierce as fellow riders like Zal and Aadil have become faster than before. My aim for MMRT? Hope to keep the podium streak alive and just go that one step higher.