As part of the current Young Media Racing Programme, we spend a day with TVS Racing learning the art of going fast off-road 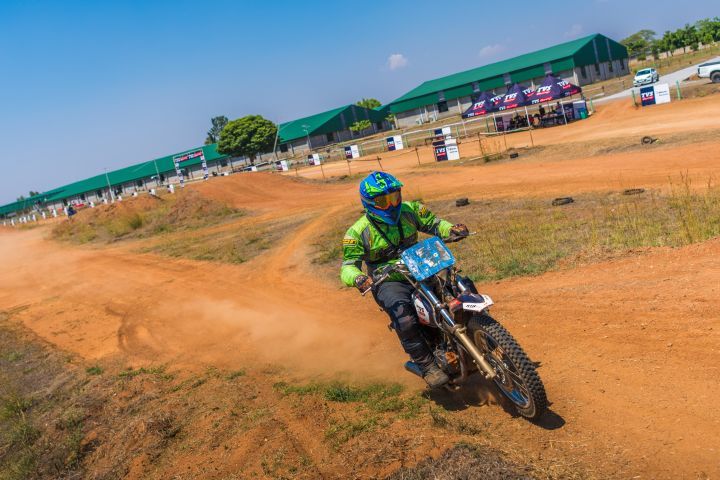 Even though I am not averse to it, off-roading is usually my second choice for weekend riding thrills. The lack of a worthy tool is the first hurdle. And then, my skill set is nowhere close to where I would like it to be. However, I am more than happy to get guidance from any source. The aim is to get better. On April 1st, a message from TVS officials popped up on our Young Media Racing Programme WhatsApp group. It read: “We might have a surprise for all of you later this month. It involves dirt. Can't say more.” Was TVS playing an April Fool’s prank or were they serious? Thankfully, it was the latter as we were invited to spend a day training under TVS Racing’s rallying champions, Abdul Wahid Tanveer and Aravind K P.

Also Read: Revising What I Learnt To Forget With TVS Racing

The last time TVS invited auto journos to ride some off-road bikes, well, the fleet started from 300cc, with only a brave handful allowed to ride the 450 Dakar bike. In all fairness, that was after the Rallye du Marroc in the Moroccan desert. We were called at their off-road training track near Bangalore, which is more of an MX environment. Thoughtfully, TVS was not planning on letting us jump directly onto the RTR 300 FX prototype racer and maim ourselves. Also, in case of even a small mishap, fixing the bike for the then upcoming Desert Storm rally would be time consuming, ruining one of their rider’s chances in the rally. So the bikes we were going to be riding this time were the off-road-prepped TVS Apache RTR 200 4Vs.

As is the norm, we were first briefed on the day’s activities. But it was rather done in a jiffy. Why? Well, professor Aravind thought it was best if we were shown and taught on the go, rather than shuffling between a classroom session followed by some track...er… dirt time. And even then, we didn’t directly dive into riding. Off-road riding demands a lot from your body, especially from your core, back and leg muscles. Remembering our good old PT period from school, we carried out a few warm-up exercises, stretching our office-chair-sedated limbs to prevent them from creaking the following day.

Rejuvenated and ready for action, Aravind told us to hop onto the bikes. We began with the way one should sit. Instead of sitting as far back on the seat as possible (road riding basics 101), Aravind told us to push up close to hug the tank with our thighs. Elbows up, legs gripping the tank and eyes looking straight ahead. Exaggeration was crucial, Aravind said -- it might have seemed silly then but when we would actually go around our track, our arms would inadvertently droop, which would restrict our movement.

Next, when entering a corner, the inner leg should be fully extended forwards and as high as possible. We don’t want to anchor the bike but just weigh the front a bit. All this had to be done while the bike is lowered into the bend with both thighs gripping the tank. The outer peg is just to balance the lean.

To drill this in Aravind made us do a seemingly simple figure of eight. Not to brag, Aravind was mightily impressed as I was able to follow his instructions to the T. Hence I was spared the stick. For those who were struggling, well, Aravind poked and pronged the areas on the riders that needed to be in the right area. Given that this was a new riding style for many, the drill needed to be simplified. He made us take long round circles in one direction and then in the opposite after a while, until we got it right.

Our next logical step was to learn the right way to position ourselves when we stood up on the pegs. With our legs pigeon-toed inwards, we just needed to lift our bottoms and not stand all the way up. This allowed us to keep the bike firmly in control with our legs gripping the seating area. Our backs were still arched, not straight. By doing this, we were not loading up our legs and back unnecessarily, tiring us less in the process. And in case when taking flight, the legs would act as the body’s suspension, reducing the chances of ligament tear. A slalom drill got us the basic hang of it.

By the end of this, we were ready to take to the track. Strict instructions were given to us: no taking on the big jumps. We were not ready and even these RTR 200s were going for the ’Storm. Aravind and Tanveer hopped on the 300s as they led us around the highly complex track, bypassing the big jumps.

First lap was trying to keep a cool head and learn the new surroundings. Also learn how the 200 behaved beyond first gear. Both of the instructors were happy with my initial set of laps, pointing out that I needed to grip the bike a bit more when taking on the Whoops (a series of small bumps that require precision in terms of speed and timing).

We upped the pace in the second session. That is where our training came to the fore. When speeds began going up, our senses needed to be a bit more alert. Every single input needed to be well thought out. A bit more and we could have been part of the scenery -- which I ended up becoming once. Better than putting it into words, just check the GIF below.

It was a slow-speed excursion which I escaped unscathed. After returning to the pits, Aravind told me that I became a bit too eager with the throttle at the wrong point of the track. With the sun directly overhead, I did not notice that the area contained very loose sand. The rear stepped out on me. Since I did not grip the bike with my legs, it directed me into the bushes. Pardon my French, but shit happens.

Incidentally, that was all my final session of the day. A bit of a bummer ending the day like that but overall, I was overjoyed. I must thank both Aravind and Tanveer for the constant encouragement and TVS Racing immensely for the day. I do not know how much of it I can apply when our actual track racing calendar begins but I was able to put my training to good use at a recent first ride of an off-road bike. So mission accomplished then? Sort of.

All Comparisons of Apache RTR 200 4V