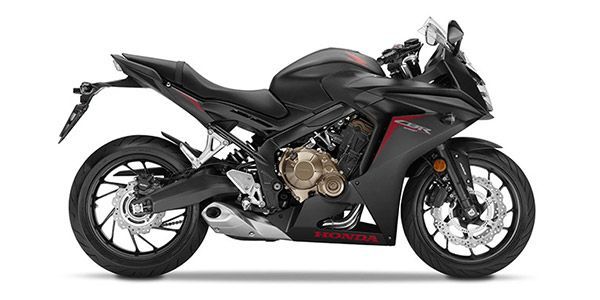 Honda has finally entered the middleweight segment with their latest offering, CBR 650 F. The bike is powered by a liquid cooled, in-line four cylinder 648.7cc churning out 85.2 bhp of power and 62.9 Nm of torque. The four cylinder engine exudes trademark Honda refinement which goes hand in hand for effortless highway cruising. The bike is equipped with petal discs and ABS as well. The bike commands a premium pricing at 7,30,000 (ex-showroom, New Delhi). The claimed mileage figure stands at a respectable 21 kmpl. The bike ticks all the right boxes when it comes to a premium sport tourer
Read More

After being absent from the Indian for quite a few time, Honda has relaunched the CBR650F in India. The 2017 Honda CBR650F has been priced at Rs 7.30 lakh (ex-showroom). The prime reason for the discontinuation of the motorcycle was that it didn’t adhere to the new BS-IV emission norms. The new motorcycle looks similar to its predecessor but there are few visual differences. The 2017 Honda CBR650F gets full-LED headlamps, sharper fairing, redesigned tail lamp and muffler along with bronze finish on the engine crank case. The bike features twin-pod all-digital instrument cluster. It will be made available in two new shades - Millennium Red and Matte Gunpowder Black Metallic.
The bike is powered by a 649cc, inline-four mill that delivers 86.7PS of power and peak torque stands at 60.5Nm, however, the international model produces 90PS and 64Nm of peak torque. Honda has detuned the engine to better suit the low quality of fuel so that it doesn’t damage the motor. Honda claims a fuel efficiency figure of 20kmpl and full tank range of close to 350km with its 17.3 litres tank capacity. Claimed top speed for the bike is 194kmph. Braking is done by disc brakes on both ends while ABS is standard. Damping duties are handled by 41mm Showa Dual Bending Valve (SDBV) fork that has more suspension travel at 120mm (110mm in the older bike). While a preload adjustable monoshock does duty at rear. The Honda CBR650F competes against the Kawasaki Ninja 650F in India.
Read More

Do the mild updates for 2018 make the Honda CBR650F more appealing? Or is just a case of too much money for too few cc’s?

The Honda CBR650F received a few updates for 2017. We grab breakfast with a few owners to see if the changes alter the appeal of this motorcycle.

The Honda CBR 650F is definitely among the most highly anticipated motorcycles of 2015, which was launched at the mega RevFest event recently. We ride the highest displacement Honda motorcycle to be assembled in India to find out whether it lives up to the hype surrounding it...