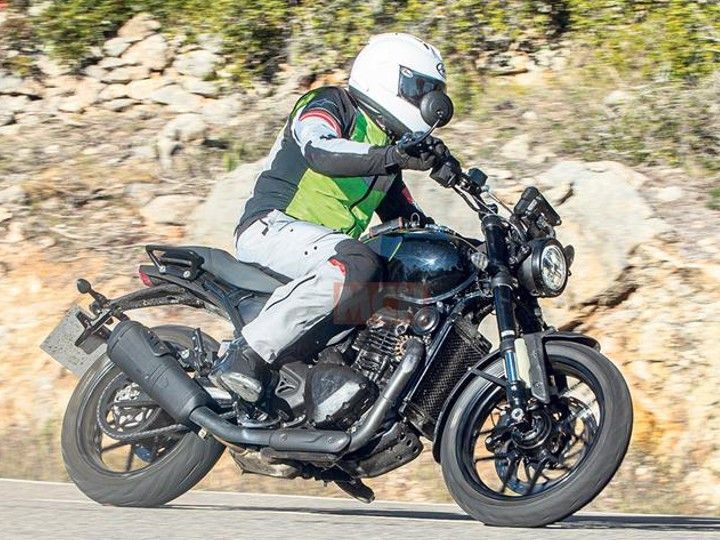 Looks like Bajaj Triumph’s partnership is beginning to bear fruits as the first motorcycle has been spied for the very first time. Going by the spy shots, this is unlikely to be the sub-2 lakh rupee bike that Triumph had promised earlier, but something a little more premium, catering to the 350-400cc segment.

The test mule bears all the markings of a premium mid-capacity roadster as it gets components including an all-LED lighting, a large digital instrument cluster (likely to be a TFT unit), upside down fork, rear monoshock, and even an aluminium swingarm.

It’s pretty clear that the bike (let’s call it the Triumph Bajaj 350 for now) will be powered by a single-cylinder liquid-cooled engine. The displacement could be somewhere around 350cc-400cc. While the engine casing is typical to that of a Triumph bike, the corrugated fins look very Bajaj-esque. It isn’t surprising considering the bikes will be made by Bajaj but will carry Triumph badging. Expect it to be a DOHC unit with decent highway-faring capabilities.

The side-slung upswept exhaust looks neatly designed and goes well with the bike’s sleek tail section. It also comes with a bash plate for extra protection. The wheels appear to be 17-inch units wrapped with fat road-biased rubber. The brakes appear to have been carried over from the Bajaj Dominar 400, which comes with a 320mm disc with radial caliper, and a 230mm unit at the rear.

The handlebar is easy to reach and the footpegs are slightly rear set, resulting in an upright ergonomics but with a slightly forward lean. Triumph has equipped the bike with a single-piece seat for optimum comfort. The large split grab rails should help keep the pillion secured too.

To sum up, it is evident that Triumph is targeting the fast-growing 300-400cc segment with its upcoming roadster. It’s a sound business move to prioritise this segment as it is witnessing an increased demand in several countries in south-east Asia as well as Europe. This segment is currently populated by the likes of the BMW G 310 R, Honda CB300R, KTM 390 Duke. Triumph’s technological expertise and design sense coupled with Bajaj’s manufacturing prowess will give the British bikemaker a fighting chance in this burgeoning space.

Expect this Bajaj-Triumph motorcycle to be launched sometime early next year, presumably at around Rs 2.7 lakh (ex-showroom). With this motorcycle, Triumph’s entry price point will go down considerably, and will help the brand garner more customers.