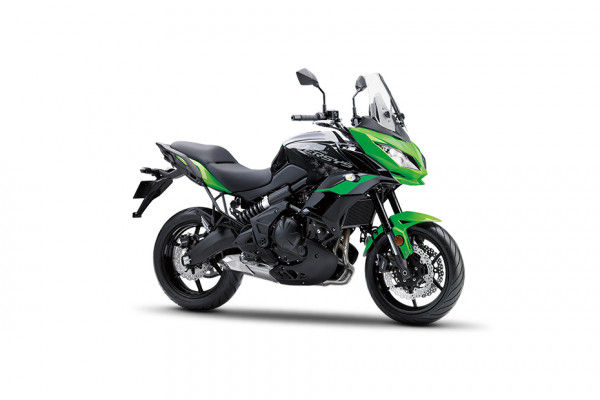 For a limited period of time, Kawasaki will be offering a discount on its Versys 650 adventure tourer to the tune of Rs 30,000. This can be availed on the on-road price or even for accessories. More details in this story here. The Kawasaki Versys 650 BS6 price is Rs 6.79 lakh (ex-showroom). The price increase compared to the BS4 model is just Rs 10,000. The main reason for this small price hike is because Kawasaki have only updated the engine to meet the new BS6 emission norms and haven’t given the bike new features or styling updates.

The 2020 Kawasaki Versys 650 is available only in candy lime green colour option and there have been no changes made on the styling front. Its 650cc siblings, the 2020 Kawasaki Ninja 650 and the Z650 received LED headlights and a TFT colour screen as part of their BS6 update. The only noteworthy feature the 2020 Versys 650 has are the adjustable windscreen and the massive 21-litre fuel tank a boon while touring.

On the mechanical front, the BS6 Kawasaki Versys 650 is powered by a 649cc, liquid-cooled parallel-twin motor is rated at 68PS and 64Nm of peak torque. The bike employs a 41mm front fork with rebound and preload adjustability whereas the rear gets a monoshock with remote preload adjustment. Brakes include dual 300mm petal discs up front and a 250mm petal disc at the rear.

The mileage of Kawasaki Versys 650 is 21 kmpl. This is the claimed ARAI mileage for all the variants of Versys 650.
View User Reported Mileage

What is the price of Kawasaki Versys 650?

What is the mileage of Kawasaki Versys 650?

Does the Kawasaki Versys 650 have ABS?

Which is better Kawasaki Versys 650 or Kawasaki Ninja 650?

What is the EMI of Kawasaki Versys 650 in Delhi?

What are the colours available in Kawasaki Versys 650?