Is the Kawasaki Versys 650 true to its adventure-tourer DNA or is it one of those offerings that just sits on high heels? We put it through its paces to find out the answer 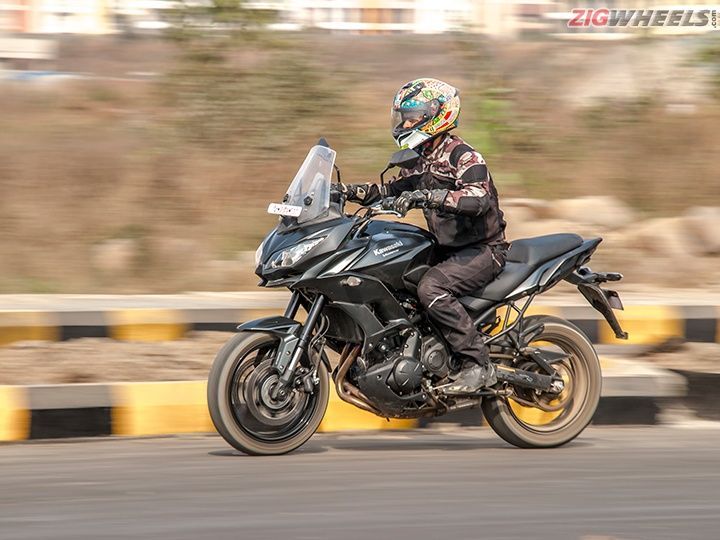 The Kawsaki Versys 650; a lot has been said about it ever since its launch in December last year. While it garnered some criticism at that time mainly for its pricing, the ones who rode it came back with a fresh perspective. Since then it has been appreciated for its upright seating, plush ride and most importantly its touring capabilities. Given that it had already gained a few thumbs ups and it is an adventure-tourer, we decided to put it through a more rugged test in a bid to answer one question. Can it really take the beaten path?

Before we get to the heart of the matter, let’s shed some light on its design. In terms of looks, the Versys 650 is like a scaled down version of its elder sibling. The quarter fairing, windscreen as well as the tall stance all are pretty much a reflection of the Versys 1000. Although this one too has a sharp outline, I am not really fond of its beaky front end.

But once I got past the peculiar design, it was easy to see that it boasts of function over form. The flat tank makes it easy to mount a tank bag, something that the touring junta will appreciate. And for those who like to carry extra luggage there are mounting points for hard panniers as well.

The Versys 650 is powered by the same 649cc parallel twin unit from the Ninja 650 and the ER-6n. In this state of tune it makes peak power of 69PS and maximum torque of 64Nm. Although there is a drop in power of about 3PS from the Ninja 650 the difference is barely noticeable and it doesn’t feel underpowered either. Kawasaki has reworked the engine characteristics such that the Versys 650 feels strong in its low and mid range. The torque is well spread out throughout the rev range which makes it extremely usable. While the Versys 650 doesn’t feel overwhelming in its acceleration, it has enough to keep you entertained. The digital fuel injection ensures that the fuelling is exactly right and the throttle response is crisp.

In terms of numbers, the Versys 650 might feel a bit slower than its more affordable twin owing to the former’s increased weight and the larger fuel tank. Be that as it may, the Versys feels more relaxed mainly for the fact that its vibrations are a lot more controlled than the N650.

The 6-speed gearbox is a straight lift from the Ninja 650 too. The clutch action is soft and the reach adjustable lever makes life that much easier for the rider. Shifts are slick but when riding enthusiastically the need for slipper clutch is felt.

Spread over two days, I spent considerable time on Versys 650 in the city as well as on the highway. Although the Versys 650 has a tall seat height of 840mm, it wasn’t difficult to manoeuvre at slow speeds in the city. The tall handle bars, wide seat and the marginally rear set foot pegs ensure that you remain comfortable on the saddle for long hours. The tool-free height adjustable windscreen makes the ride a lot less tiring on the highway.

As far as handling is concerned, the Versys very easily trumps its middle-weight siblings thanks to the Showa separate function forks. The forks allow you to adjust preload and damping which in effect helps the bike maintain its composure over bumpy surfaces. However, you experience some dive under heavy braking owing to the long travel suspension steup up front; something that you need to get used to. At the back too, the Versys 650 gets adjustable shocks. The bike gets a remote knob to adjust the damping making the Versys fantastic to attack a series of bends as well as take on the open highway. The tyres on our test mule could have been grippier but we would give it the benefit of doubt considering that it had already clocked more than 7,000km. Ride quality is impressive be it on good roads or bad. In fact, even mid-corner bumps don’t quite upset the bike’s stability.

The Versys 650 gets the same brake setup as the Ninja 650, 300mm petal discs up front and the 250mm single disc at the back. One of the biggest complaints that enthusiasts have had with the Ninja 650 is the absence of ABS. In the Versys 650 though, Kawasaki seems to have addressed the need. Brakes have enough bite and even under emergency braking the motorcycle doesn’t quite lose its line.

In terms of touring capabilities, the Versys 650 with its comfort and great riding dynamics can very easily hog those 1,000km a day rides. Take it off the tarmac and it feels fairly impressive too. The Versys isn’t too heavy and feels nimble enough to make those quick directional changes. When riding standing up, the seat is easy to grip with the inside of your knees and the handle bar is tall and wide enough for good leverage. The 170mm ground clearance further helps ensure that the underbelly doesn’t scrape while riding hard off road.

The only factor that holds it back from being a hardcore off-road machine is the tyres. The Dunlop Sportmax rubber that the Versys 650 sits on, are road focused and feel unsure off the tarmac. We would have loved it had Kawasaki fitted the Versys with a 19-inch wheel up front and dual sport tyres. But all of this would surely have called for some engineering and an eventual rise in cost.

Kawasaki launched the Versys 650 at Rs 6.6 lakh (prices ex-showroom Delhi). And although it feels a bit on the higher side for a motorcycle in this class, it has a lot on offer for the price including separate function forks, remote adjustable rear shocks, ABS and superior riding dynamics. Moreover, Kawasaki’s are known for their build quality and hassle free ownership experience. So if you are looking for a motorcycle that can do a 1,000km a day without much fuss then the Kawasaki Versys 650 is the best bet in the business. And for those who wish to take the road unexplored, just fit it with dual sport tyres and a bash plate and you are good to go.