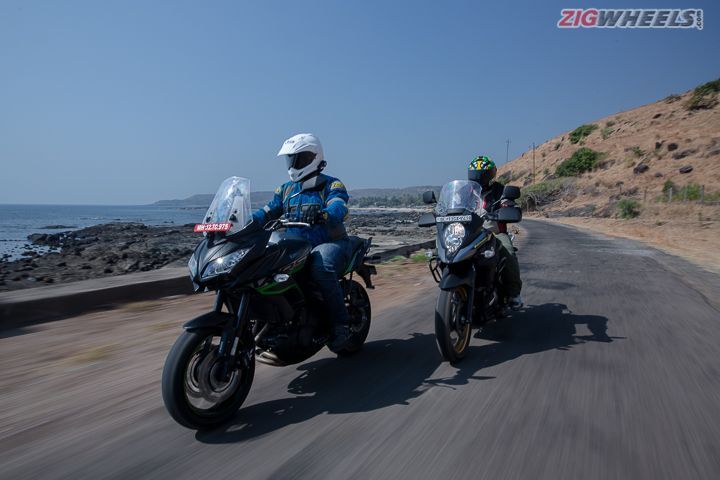 Discussions - one thing the guys at ZigWheels love to do. The topics mostly revolve around motorcycles, cars and motorsport. And often, these conversations intensify as they stretch over a few cups of coffee. One such discussion lead to this story. After watching Kartik’s review of the Suzuki V-Strom 650XT, I was convinced that it is the best middleweight ADV motorcycle in its segment.

However, my colleague, PD (Priyadarshan) was of the opinion that the Kawasaki Versys 650 is the better ADV bike in the sub-Rs 10 lakh price bracket. While the debate on the pros and cons for both the machines dragged on, it was inconclusive. So, we decided to head out on a road trip to the beach town of Diveagar from Pune to settle this once and for all.

With limited time on hand and a video shoot also planned, we commenced our journey at 5:30am. As we exited Pune, the temperature dipped a fair bit and within an hour of riding, it was around 9°C. Both PD and myself were almost shivering and decided to stop for a cup of tea to get some relief from the biting cold. As the piping hot drink warmed us up, we started discussing the appearance of the bikes.

While both the motorcycles fall in the same segment, their styling is completely different. The Kawasaki Versys 650 looks lean and athletic, while the V-Strom 650, is big and bulky. Personally, I feel that the V-Strom 650 XT looks like a quintessential ADV with the sharp headlight above the beak-style apron, large 19-inch front wheel, generous saddle and knuckle guards. The V-Strom attracts a lot of eyeballs too, thanks to its sheer size, the bright shade of yellow and the golden spoke wheels. PD, on the other hand, felt that the split headlights, tall windscreen and the chunky USD forks endow the Versys 650 with an aggressive stance and is seemingly the better looking bike of the two. At the end of the day, styling is subjective and we decided to enjoy the hot beverage rather than arguing further.

Both motorcycles employ semi-digital instrument consoles, with the one on the Kawasaki looking more modern. The V-Strom 650’s console seems like a flashback from the 90’s, and the RVMs look as if they were sourced from the parts bin of the Maruti 800 or the Alto. However, the Suzuki’s instrument console displays additional information like ambient temperature, battery voltage and engine temperature.

Additionally, the V-Strom also has a much better switchgear and you can toggle through the display on the move too. The Versys’ switchgear feels more basic here. And while the windscreens on both the bikes are adjustable, the one on the Kawasaki can be adjusted by hand, whereas you need an allen key to adjust the Suzuki’s. That said, fit and finish on both these Japanese bikes, as expected, is impressive.

With wider roads ahead of us, it was time to test the firepower of the machines, which, in fact, is quite similar. The Suzuki’s V-twin motor churns out 70.7PS, while the Kawasaki’s parallel-twin powerplant is rated at 69PS. In terms of torque, the Kawasaki has a 2Nm advantage over the V-Strom, at 64Nm. The fact that both the bikes weigh identical (216kg), performance numbers are also similar. In our test, the V-Strom managed a 0-100kmph run in just 0.14s less than its rival. However, while riding, it’s the Versys that feels peppier and snappier, courtesy the rev-happy motor.

So how come the Kawasaki is slower in the test? The answer lies in the way the Versys delivers its power. The front simply wants to lift up every time you open the throttle aggressively. This means it loses precious time and hence, the slower timing. The Suzuki has a much calmer throttle and linear power delivery in comparison. On the highway, both bikes can cruise at 120kmph all day long effortlessly, with the V-Strom feeling marginally more refined. However, while overtaking at these speeds, the Suzuki felt slower as one has to downshift to extract power. Also, the buffeting is slightly higher on the V-Strom.

Both the bikes have an adept 6-speed transmission, with the Kawasaki feeling a tad slicker. Now, when it comes to fuel efficiency, the V-Strom 650 returned 29.26kmpl in our highway run, while the Versys 650 managed 28.17kmpl. However, the Kawasaki has a larger 21-litre fuel tank, while its rival’s fuel tank capacity stands at 20 litres. In the real world, the Versys covered 591km and the V-Strom managed 585km on a full tank of fuel.

Rather than taking the shorter route, we rode through Mahabaleshwar to test the handling characteristics of both the ADVs. As we kept on climbing the ghats, both the bikes were able to maintain good momentum, but on the V-Strom, I had to constantly change gears to be in the power band. Once the roads were clear, PD upped the pace and was attacking corners effortlessly. On the V-Strom, though, the going wasn’t as smooth and I was struggling to keep up with the Kawasaki. Cornering isn’t the Suzuki’s forte as its rather long 1560mm wheelbase and more raked out forks meant that the front and the rear of the bike felt disconnected.

Adding to the V-Strom’s woes on the mountain twisties were the 19-inch front wheel and the dual-purpose rubber. The Versys 650, on the other hand, felt as nimble as a Kawasaki Ninja 650. Its road-spec tyres, shorter wheelbase and 17-inch wheels meant the bike felt more natural and entertaining to ride on the mountain roads. However, I wish it had better rubber as the stock Dunlop tyres don’t feel up to the mark.

Braking hardware on the ADV duo is similar and consists of twin disc brakes at the front and a single disc at the back. Both the motorcycles have near identical braking distance of around 50 metres from 100-0kmph and feature dual-channel ABS. In terms of feel, the V-Strom’s brakes feel more progressive, whereas on the Versys, I experienced a lot of fork dive. This can be a bit unnerving for novice riders. When it comes to the ABS action, in the V-Strom, it feels a little harsher and the intrusion could’ve been a little smoother.

Since we were in the beach town of Diveagar, we just couldn’t have missed the chance of kicking up some sand with this Japanese ADV duo. While the V-Strom had struggled on the mountain roads, it was in its element on the beach. The long wheelbase meant that it felt more stable, and the milder throttle also helped in modulating the slides better, even though it was my first occasion riding a bike on the beach. The Versys with its road-spec tyres and smaller wheels was struggling and PD also took few tumbles as he was muscling the bike on the loose surface.

Another aspect in favour of the V-Strom which will help newbie riders is the switchable traction control. However, rear ABS can’t be disengaged on either motorcycle. The Suzuki V-Strom also comes fitted with premium tubeless tyre-friendly spoke wheels, which will be a big boon while touring. Also, in terms of ride quality, the V-Strom felt more pliant over rocks, ruts and trails. While the Versys 650 gets preload and rebound adjustable USD forks, the front suspension has a tendency to bottom-out on the stock setting. Both the bikes feature preload adjustable monoshocks, which can be conveniently adjusted using an external knob.

Both the bikes have upright and comfy riding ergonomics. However, it’s the Versys 650 that feels comfier as the handle bar is positioned lower and closer to the rider. On the V-Strom, my hands were stretched out, leaving my shoulders feeling a bit strained. But, the Suzuki has the larger and better seat of the two, for both rider and pillion, which is extremely useful while touring. Saddle height difference between both the bikes is just 5mm, but the V-Strom feels much shorter than the Kawasaki and both my feet were planted on the ground (I am 5ft 10 inches tall).

So, will I suggest the V-Strom 650 to shorter riders? Not really. You see shorter riders will feel that their upper body is more strained because of the forward-set handlebar. While on the Versys 650, shorter riders might struggle initially owing to the tall seat, but one can get a hang of it rather easily. Also, the Kawasaki felt nimbler in traffic, while the V-Strom felt heavy and cumbersome to ride through traffic.

Despite riding the ADVs in bumper-to-bumper traffic at times, engine heat never reached scorching levels, which is remarkable, given their displacement. In city, the fuel efficiency figures for the Suzuki and the Kawasaki were 26.46kmpl and 24.95kmpl respectively, which is really commendable for bikes of this size. When it comes to headlights, the V-Strom has a wider spread and throw, but in terms of intensity and sharpness, the Versys 650 has the advantage. So, after completing almost 500km, I can confirm that both the ADVs are proper mile munchers and score really well on the comfort factor, with the Versys 650 feeling slightly comfier owing to its more natural riding posture.

So now it’s time for the verdict and it’s a rather straightforward one. If you’re looking for a proper adventure tourer bike under Rs 10 lakh (on-road), the V-Strom 650 is the clear winner. But, does it justify the almost Rs 77,000 premium? Absolutely. For the extra moolah, you’re getting better off-road compliant hardware and also the benefit of traction control. However, if I had to pick a bike among the two, it would be the Versys 650.

The Kawasaki offering feels much more engaging to ride, especially on winding mountain roads and the rev-happy motor means that you can blast down the highway faster. In fact, the Versys 650, in my opinion, is the perfect sports tourer for our non-existent roads and a better bet than the Ninja 650. Yes, it can’t match the off-road prowess of the V-Strom, but it does everything else better and costs lesser too.