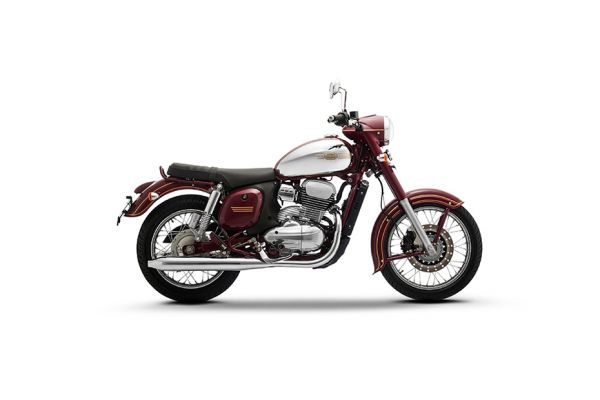 Jawa is a cruiser bike launched at a base price of Rs. 1.64 lakh in November 2018 by Jawa Motorcycles in India. Jawa is powered by 293cc engine claiming mileage of 41.26kmpl. Jawa has a single cylinder, 4 stroke, liquid cooled, dohc engine and a 6 speed gear box. Jawa comes with disc breaks in front and rear with a support of ABS. It is available in 4 variants and 3 colours.

Classic Legends recently updated the classic Jawa to comply with BS6 emissions. The single-channel ABS variant now costs Rs 1,73,164 while the dual-channel variant retails at Rs 1,82,106, a hike of Rs 8,864â€¬ and Rs 9,928 respectively over its corresponding BS4 models. Aside from the tweaked engine, the bike remains unchanged.

Though Classic Legends haven’t revealed the BS6 bike’s specs, we believe it won’t differ from the current BS4 model. Expect the 293cc liquid-cooled, single-cylinder mill to belt out 27PS of power and 28Nm of torque. The motor runs on a 6-speed transmission. In terms of hardware, the Jawa uses a double downtube frame with a conventional telescopic fork and dual shocks at the rear which get 5-step preload adjustability. Anchoring the bike is a single 280mm disc up front with ABS while the rear runs a conventional 153mm drum brake to keep costs in check. Its 18-inch front and 17-inch rear tyres come wrapped in 90/90-section and 120/80-section rear tyres. A low seat height of 765mm and a kerb weight of just 170kg should be a boon for short riders.

The Jawa is available in two variants: single-channel ABS and dual-channel ABS.

Thankfully, the iconic Jawa sticks to its retro roots. The design is reminiscent of the original bike, which to our eyes is quite appealing. It features a dome-shaped headlamp, which extends and forms a cover around the front fork. Other notable design features include vintage-style fenders, a teardrop-shaped fuel tank garnished in chrome and a rather small single-seat setup.

On the features front, the bike comes with liquid-cooling and an old-school instrument console reading out the fuel level and speed.

Rivals include the Royal Enfield Classic 350 BS6 and the Benelli Imperiale 400. The latter will be updated to comply with BS6 norms in April.

Q. Does Jawa has kick start? View All Answers
Q. What is the approx service cost of Jawa or Jawa 42 for a year - 42 - 42 - 42? View All Answers
Q. Is Jawa 42 comfortable to ride for a tall person at 5.9 foot? Also what does the handlebar difference mean to riding position between Jawa 42 and Jawa classic - 42 - 42 - 42?
Q. Which is a better bike either Jawa 42 or Jawa Classic, sir, 42 and jawa classic is looking very short when compared Royal classic (looking height length also) View All Answers
Q. What the difference between Jawa bikes and Royal Enfield in reference to price, performance, service etc. Is it true that the waiting period for Jawa bikes is 6 month
Q. What is gear pattern - Jawa? View All Answers
View More Questions
Q. Should I wait for Jawa BSVI or go for BSIV that is going to be taken down from the shelves soon.
Q. Does jawa 42 has digital odometer and trip meter?
Q. Does Jawa Motorcycles Jawa have a slipper clutch?
Q. Is Jawa fuel injection or carburettor?
Q. When is the Jawa Classic BS6 booking starts in Hyderabad please?
Q. Is Jawa Classic a good bet among its peers? If yes, should I go for BS IV or wait for BS VI? View All Answers
View More Questions
All Jawa Questions and Answers