The recent round of price revisions has seen the asking price of the Bajaj Pulsar NS200 go up by Rs 2,004. The new sticker price is Rs 1,35,226 (ex-showroom Delhi), making it one of the more expensive bikes in the 200cc segment. Get more details on the new prices here.

The Bajaj Pulsar NS200 BS6 gets fuel-injection and an additional catalytic converter, which are the main reason for the price hike. Power and torque have increased by 1PS and 0.2Nm to 24.5PS and 18.5Nm on the BS6 version, while weight has gone up by 2kg. Apart from a BS6-compliant fuel-injected motor, the Pulsar NS200 BS6 remains cosmetically and mechanically unchanged. It gets a perimeter frame with suspension in the form of telescopic forks and monoshock. Braking is via a 300mm front disc and 230mm rear disc. It uses 100/80-17 front and 130/70-17 rear MRF REVZ tyres.

The Pulsar NS200 has a sporty design. However, given that its styling has virtually remained unchanged since its launch in 2012, it has started to look dated. Its direct competitor, the TVS Apache RTR 200 BS6, recently received a major makeover. We expected the NS200 to receive one as well during its BS6 transition but it does not even get a new sticker job. The Pulsar NS200 will get the same four colour options as before: Fiery Yellow, Wild Red, Graphite Black and Mirage White.

The Pulsar NS200 gets a two-tone paint job with new graphics. The semi-digital instrument cluster is legible and easy to use. It also gets a shift light beacon along with other basic readouts like a side stand indicator and high-temperature warning lamp. While the NS showcases admirable build quality, there is still room for improvement. The bike gets three new paint options that make the bike look fresh. You also get funky wheel rim graphics that are colour-coded with the bike. The NS now gets a belly-pan fairing as well.

The Pulsar 200 NS was, in a way, Bajaj's first modern sports bike. It was the first Bajaj to get a perimeter frame, a rear monoshock and a potent liquid-cooled motor. The NS 200 came with almost all the bells and whistles you wanted in a sports bike but offered it all at a very affordable asking price.

Despite the arrival of this modern flagship from Bajaj, the Pulsar 220F continued to command buyers’ spends. Bajaj hoped to do better with the arrival of the NS’ partly-faired sibling, the AS200. While the 200NS was axed to give the AS breathing space, the serpentine tale now continues with the reintroduction of the NS 200 for 2017. So has the NS changed during its sabbatical? 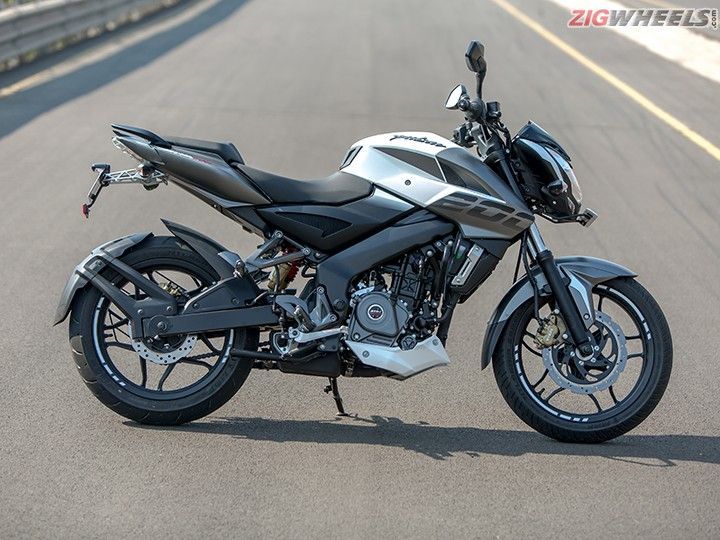 The key changes are aimed at helping the NS pass upcoming BS-IV norms. To do so the 199cc liquid-cooled engine gets a new CDI ignition unit that gets more maps for a more precise spark duration that enhances combustion efficiency in all riding loads and conditions. This means better efficiency, performance and ultimately, cleaner emissions from the engine. Then there is a fuel vapour recirculation unit and a reworked catalytic converter for BS-IV compliance. Power output from the 199cc single remains the same 23.52PS at 9500rpm and 18.3Nm of torque at 8000rpm. Bajaj has also worked on the NS 200's design to make it look more premium and up-to-date. 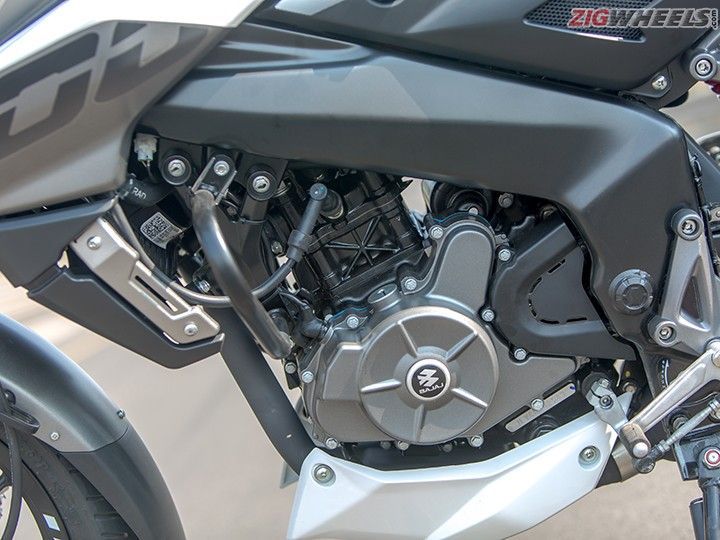 The nomenclature has been revised for 200 NS to NS 200 to better sit with rest of the Pulsar line-up like the RS 200 and AS 200. The bike gets three new shades that make the bike look fresh. There are funky looking wheel rim graphics that are colour-coded with the bike. The NS now gets a belly-pan fairing. Rest of the bike remains the same save for the missing headlamp switch that was made redundant by the Auto Headlamp On (AHO) unit. 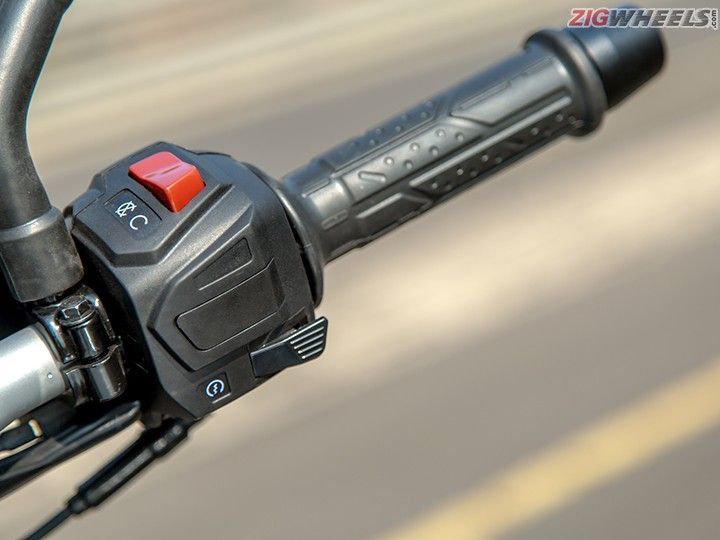 How is it to ride-

The Pulsar NS 200 has always been one of the best handlers to come from the Bajaj stable. Unlike its KTM cousin, the NS 200 trades the KTM Duke 200's sharp reflexes for a surefooted feel. Cycle parts too are not as exotic or lightweight as the Duke 200 but on a twisty road, the NS 200 can be as engaging to ride. In fact, the bike feels more relaxed and accommodating on the limit, something new riders will appreciate. Ride quality is good too though a tad on the firmer side going by the sporty demeanour of the bike. The MRF Zapper tyres grip well in the dry and emanate a good level of confidence to ride the bike aggressively. 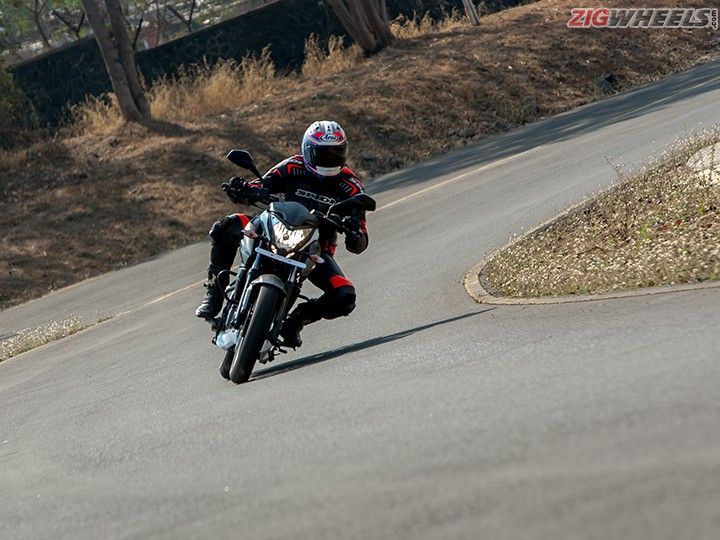 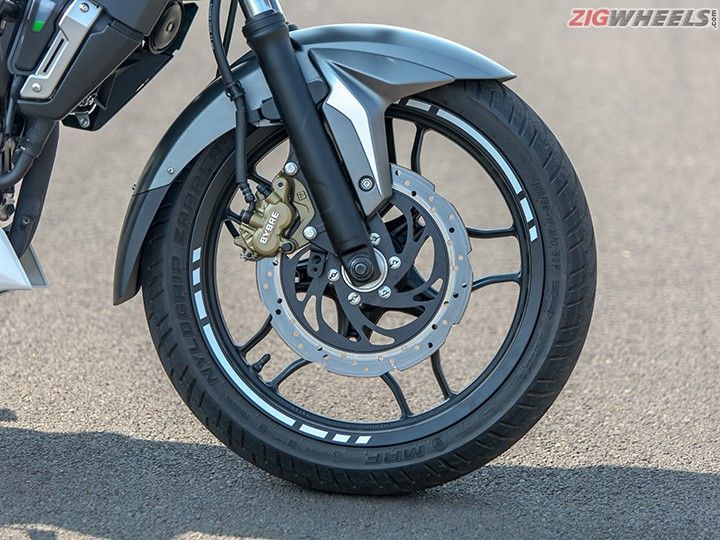 Braking is via a 280mm front petal disc and 230mm rear petal disc gripped by Bybre callipers.The NS 200 might miss out on the KTM Duke's radially-mounted brakes but the Bybre callipers have a strong and more progressive bite. The bike misses out on ABS which the RS 200 gets which is a missed opportunity. Under braking tests, the NS 200 did the 80-0kmph run in 3.05 seconds covering a distance of 30.11 metres. 60-0kmph took 2.42 seconds in which the NS 200 covered a distance of 16.47 metres. 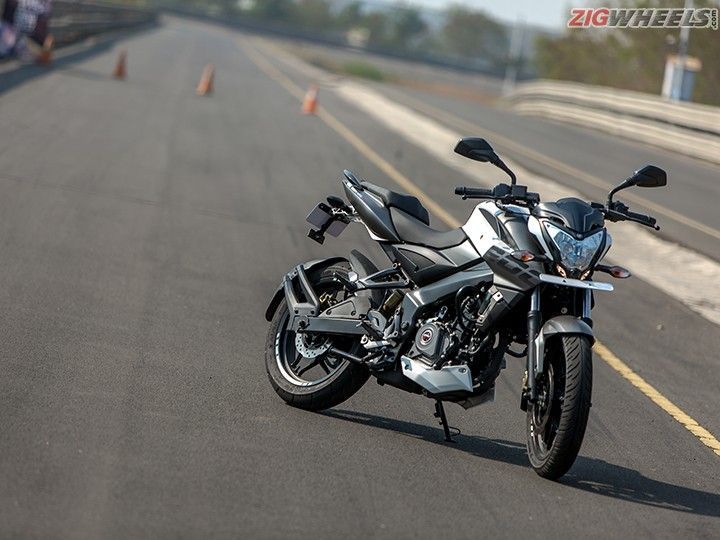 The NS 200 brought a lot of firsts to the Bajaj performance bike line-up and remained the most dynamically capable Bajaj until the arrival of the RS 200. While the RS 200 might feel more capable around a corner, the NS 200 feels more engaging. The bike is priced at Rs 96,453 (Ex-showroom Delhi) which makes it one of the best value-for-money entry level performance bikes available in the market.

What is the price of Bajaj Pulsar NS200?

What is the mileage of Bajaj Pulsar NS200?

Does the Bajaj Pulsar NS200 have ABS?

What is the EMI of Bajaj Pulsar NS200 in Delhi?

What are the colours available in Bajaj Pulsar NS200?