Which is the best 200cc naked to ignite your sport riding dreams? 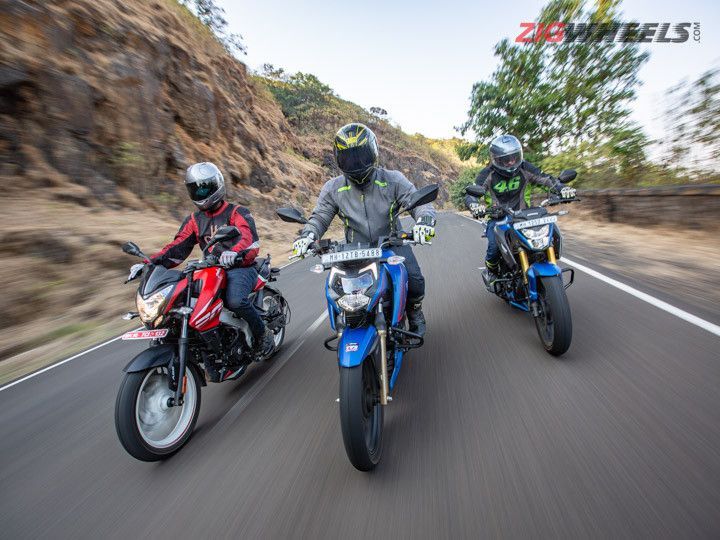 For the better part of the last decade, if you wanted a motorcycle that had enough poke without being overwhelming in day-to-day situations, you would be looking to get something from the 200cc segment. You weren’t as spoilt for choice, though, with your options limited to the KTM 200 Duke, the Bajaj Pulsar NS 200, and the TVS Apache RTR 200 4V. Even in 2021, this space doesn’t have as many contenders. The Duke has become frighteningly expensive, the Hero Xtreme 200R is no more, and Honda’s contender, the Hornet 2.0, isn’t exactly a 200cc motorcycle.

So what’s the best bike in this segment today? Is going down in displacement the way to go, like Hornet 2.0? Is the Pulsar still relevant? Have the Apache’s recent updates made it a little bit too much? Let's find out which bike provides the perfect blend of performance and practicality.

All three motorcycles have clear intentions of what they have set out to do. City slicking isn’t in the Pulsar’s repertoire. It might be the most powerful of the lot with six gears but all that power is made right at the top of the rev band. And with short gear ratios, you end up working the gearbox quite a bit to keep it in its sweet spot.

The Hornet is poles apart. The engine is blessed with heaps of torque lower down the rev range, allowing you to commute in the city while leaving the bike in fourth or fifth gear on most occasions. This easy-going nature directly results in fantastic city fuel efficiency: 10kmpl more than the next bike.

With surging fuel prices, fuel efficiency is one of the crucial aspects that one looks for in a bike. But it isn’t the deciding factor for this class of motorcycles. You are getting into a sporty class and the Apache does full justice in balancing the excitement and sensibility that one seeks from 200cc motorcycles. The updated RTR 200 4V gets a new engine tune with a wider powerband and a meatier mid-range. It certainly doesn’t make you work the gearbox as much as the Pulsar, but you cannot get away with sticking it in higher gears all day like the Hornet.

Plus, it offers the plushest ride of the lot. The preload-adjustable suspension at both ends is brilliantly tuned to soak up any form of road imperfections. Over concrete surfaces, though, it feels a little too reactive and you end up bobbing around in the saddle. The only real negative bit about the RTR in the city remains its riding posture. While your upper body is nice and relaxed, your lower half tends to feel cramped, especially if you’re on the larger side. Blame the high-set sporty footpegs for this.

In this regard, the Pulsar feels quite nice. Right from the moment you sit on it and reach for the bars, you get a lovely sense of command over the motorcycle. The seat cushioning is firm but absorbent, the texture is grippy and the slim tank allows you to straddle the bike more efficiently. Even the taut suspension isn’t that much of a bother. It isn’t supple and doesn’t soak in big bumps as well as the Apache’s suspension, but it feels a lot more predictable and stays composed in all situations. Even over sharp bumps, the bike never gives you the feeling that it’s tossing you off the seat.

The Hornet, on the other hand, feels a little on the stranger side. The controls are fairly commuterish, the bars are narrow, and the ride can only be described as “confusing”. It tends to feel crashy and jittery over sharp bumps while also managing to wallow and bottom out over the really large undulations. Thankfully, it feels light and agile, allowing you to flick through traffic with ease.

What’s even more of a problem is the engine refinement on the Hornet. It is very un-Honda like. It sounds harsh all the time and once you start giving it the beans, the engine starts to whine and gets buzzy.

Venture out of the city and the Pulsar immediately starts to show its edge over the other two. Its rev-happy engine doesn’t mind sitting at triple-digit speeds all day long. You also have the sixth cog to thank here, which while not being that beneficial in the city, really allows the NS200 to stretch its legs on open roads. In fact, it feels calmer doing 95-100kmph than sitting at 85-90kmph, the sweet spot of the RTR 200.

Yep, the TVS naked still soldiers on with a five-speed transmission. With the wider powerband, the 2021 RTR can sustain highway speeds better than its 2020 model. Had it arrived with a sixth cog, it would be able to keep up with the Pulsar without breaking a sweat.

The tables completely turned on their head for the Hornet on the highway. All the bits that made it such a nice city bike cause it to lag behind here. It doesn’t like to be revved hard, feels gruff from 70kmph onwards and even if you don’t mind the buzziness of the engine, there isn’t enough poke from the relatively simple motor to match the other two. You’ll basically be forced to sit back at a more sedate pace and watch your buddies on the RTR and NS zip away in the distance. But hey, you’ll at least be able to extract great fuel efficiency.

What We Live For
It’s a point apiece to both the Hornet and Pulsar so far with the Apache nearly matching them in each riding scenario. However, show them all a set of corners and a clear winner emerges: the Apache. For 38 years, TVS has been adhering to the “Win on Sunday, Sell on Monday” ideology and even though it might sound a bit cliched, there’s no disputing the proficiency of the RTR 200’s handling package.

The split-cradle chassis has been honed on the racetrack, inspiring incredible confidence in the rider to carry way more corner speed than what you would on the other two. Chasing the Pulsar up the twisties of Lavasa, the Apache was able to brake later, carry way more corner speed and stay composed throughout the bend. Its grippy TVS rubber sticks to tarmac like a leech, never losing any traction. Mid-corner bumps are soaked up gracefully, never unsettling the ride. And in case you decide to make mid-corner corrections, it does so swiftly without batting an eyelid.

As graceful as the Apache is, the Pulsar is equally brash. You have to hustle the bike, work the gearbox, keep the revs high, and brake efficiently, all to stay on the coat-tails of the Apache. The experience is rewarding, more so for seasoned riders. However, in green hands, it can be a bit handful and harrowing. It’s far from effortless. It doesn’t hold your hand to teach you the art of cornering. It expects you to know it beforehand. Where it truly made a mark over the Apache was in the corner exits. Following the Apache out of corners, as long as you were on the correct line and managed to keep the engine revving high, you could actually gain ground on the TVS.

The light and neutral handling of the Hornet can be appealing to newbie riders. It does play the part of the friendly bike quite well, but even most new riders will reach the Honda’s limitations rather quickly. It’s horsepower disadvantage aside, it isn’t even as sharp or communicative as the other two. The wider tyres don’t help its case either. Couple that with the narrow bars, and you have to put in a bit of work to enjoy the Hornet in the twisties.

The Best Package
When you consider the only updates the Pulsar NS 200 has received in its nine years of existence are the mandatory emissions bits and countless paint schemes, it does feel rather disheartening. There’s no LED lighting, no full-digital console and no gear position indicator either! I do like the new colour scheme, though, especially this red colour over the blue option. That said, the matte finish isn’t as nicely done as on the other two, with the back-lit switches looking a bit tacky and being clunky to operate as well.

The Hornet is certainly a notch higher. Better paint quality, better plastics, and more modern elements. The console is well laid-out, packing a bit more info than the one on the NS, and its brightness can be altered too.

However, the two simply cannot match the incredible feature-set of the RTR. The LED headlight is fantastic, the dash is larger, and it has a better layout with more legible fonts. It is not short on providing useful data on the go either. It packs in a lap timer, top speed recorder, and even stores your best 0-60kmph acceleration run. TVS’ trademarked SmartXonnect Bluetooth tech enables call/SMS alerts, turn-by-turn navigation and at the end of your journey, allows you to review the collated data from the ride. The ride modes feel a bit gimmicky and you are better off sticking to Sport as the other two make the bike feel un-RTR-like. Preload-adjustment for the front fork is unheard of in this segment and just helps you tune your ride a bit more to your liking. Dual-channel ABS is available as an option, something which neither Honda nor Bajaj has equipped its bikes with. Lastly, span-adjustable levers add to the range of adjustability on offer.

Had it arrived at a significantly lower price or packed more performance, we would recommend the Honda Hornet 2.0 to people seeking a 200cc motorcycle. It does well as a city bike, but at Rs 1.28 lakh, it comes in at the same price as the single-channel ABS version of the RTR 200 4V.

We recommend you spend the extra Rs 5,000 and go for the dual-channel ABS model of the RTR. More safety is always welcome, especially when you are starting your sport riding journey.

The Pulsar’s raw and brash nature does have its own appeal. It might not have the finesse of the Apache or the convenience of the Hornet, but what it does have is the youthful Pulsar spirit that lives on even nearly a decade into its existence. Given that it is due for an update, we hope Bajaj injects some more usability and modernity into the bike without diluting the Pulsar DNA that we have come to know and love.

All things considered, there’s no disputing the fact that TVS Apache RTR 200 4V continues to remain our pick of the bunch in the 200cc naked space. Considering what it brings to the table in terms of convenience, excitement and bragging rights, it just screams value for money. It is a brilliant bike to hone your riding skills on, and it will even put a smile on your face during your commute home after a tiring day at the office.