The baby Bajaj Pulsar NS 160 is not spared from a price revision, as it will be sold henceforth at Rs 1,11,834 (ex-showroom Delhi). Thankfully, the premium is uniform across the sport bike series and the NS160 is still one of the more enthusiastic bikes in its class. Get more details on the new prices here.

The Bajaj Pulsar NS160 BS6 is powered by a 160.3cc single-cylinder air-cooled engine with oil cooler. It churns out 17.2PS at 9000rpm and 14.6Nm at 7250rpm, making it the most powerful motorcycle in its segment. Comparatively, the Bajaj Pulsar NS160 BS4 makes 15.5PS at 8500rpm and 14.6Nm at 6500rpm. The engine is mated to a 5-speed transmission. The Bajaj Pulsar NS160 BS6 is built on a perimeter frame with telescopic front fork and Nitrox monoshock at the rear. The motorcycle comes to a halt using a 260mm front and a 230mm rear petal disc with single-channel ABS. Bajaj has wrapped the 17-inch alloy wheels with 90-section front and 120-section rear tubeless tyres. Thanks to the emission restricting equipment, the kerb weight has gone up by 3kg, at 151kg kerb. The wheelbase has been increased by 2mm, so it now measures at 1372mm.

From the Bajaj Pulsar NS160 BS6’s looks, it is evident that the motorcycle carries the genes of its bigger brother, the Bajaj Pulsar NS200 BS6. The muscular fuel tank is complemented by the sleek-looking headlamp up front. It comes with a split seat setup and raised clip-on handlebars to ensure sporty yet comfortable ergonomics. The rear portion could’ve looked even more aggressive without the bulky tyre hugger. However, the tyre hugger is quite practical in keeping muck and splashes away, particularly during monsoons. The underbelly exhaust further adds to the centralised mass.

The Bajaj Pulsar NS160 BS6 comes with a halogen headlamp with pilot laps on both sides. The indicators are bulbs whereas the tail lamp is LED. Bajaj could’ve equipped the motorcycle with an LED headlamp. The bike comes with a semi-digital instrument cluster which houses the regular run-of-the-mill information like speed, revs, fuel level, clock, odometer and trip meter readings. There is no gear position indicator but it does get a shift light, instead. As far as safety is concerned, it features single-channel ABS.

When Bajaj launched the Pulsar 150 and Pulsar 180, they were among the most iconic motorcycles in the Indian biking history. With accessible pricing, the 150 gave Indian bikers their first taste of performance at a time when the commuter motorcycles dominated proceedings. The Pulsar enjoyed a cult status in the hearts of young Indian bikers for many years but the bike was showing its age and now almost feels commuter-ish with competition having made up ground. What Bajaj needed was a scion to carry forward its legacy and after making enthusiasts wait many years, Bajaj has done just that with the new Pulsar NS 160. With 150-160cc bikes witnessing high demand, especially among youngsters owing to the balance they offer between style, performance and pricing, Bajaj has decided to tap this highly lucrative segment with the new Pulsar NS 160. So how good is the new Pulsar? Let’s find out. 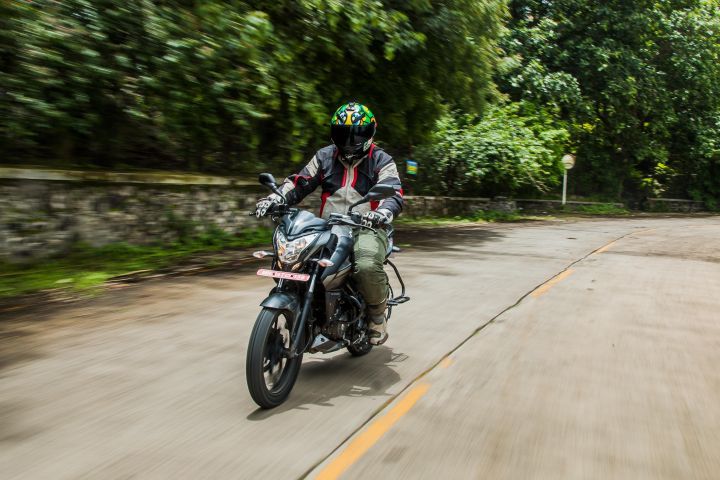 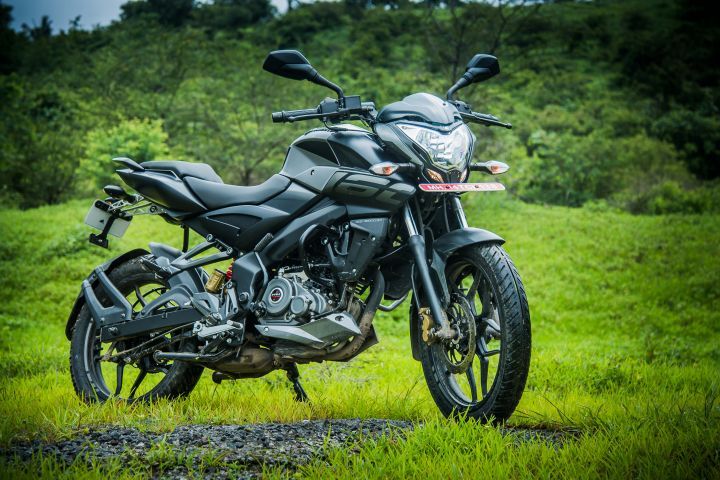 The Bajaj Pulsar NS 160 borrows its design from its elder sibling, the Bajaj Pulsar NS 200 which was reintroduced earlier this year. Despite the fact that, the basic design is almost half a decade old, the new Pulsar NS 160 does look appealing. Keeping with the spirit of a streetbike, the new bike gets similar muscular and aggressive styling. Up front one is welcomed by a sharp-looking headlight, move ahead a bit and the chiselled fuel tank and extensions grab your attention the most. Bajaj designers have smartly used the dual-tone effect in enhancing the visual appeal of the bike and we particularly liked the 160 font on the tank extension. 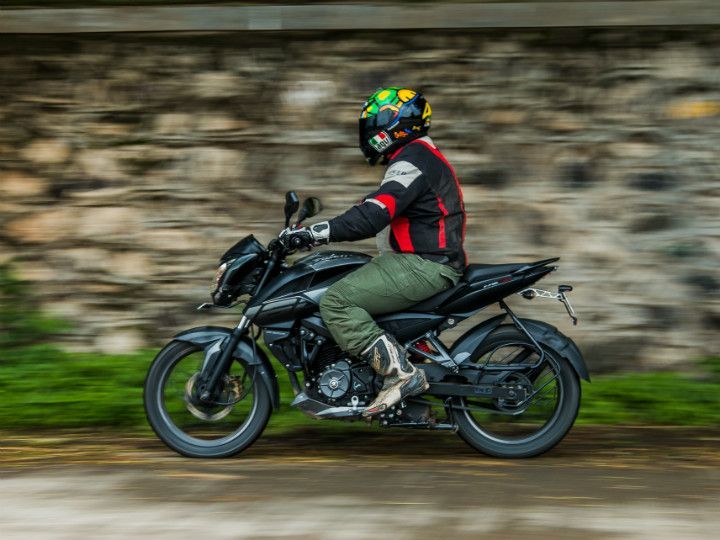 The saree guard is a petite unit and it doesn’t stand out like a sore thumb. As directed by laws, 70 per cent of the rear-wheel should be covered and this has been achieved by employing a tyre hugger, endowing the tail section with an uncluttered design. 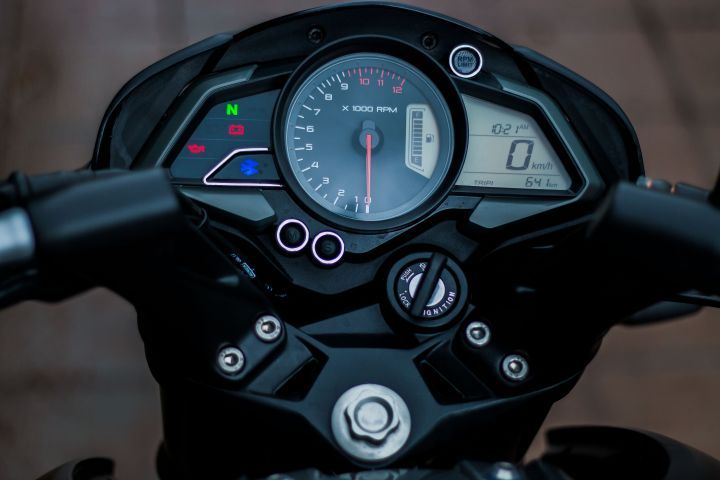 The instrument console is the same semi-digital unit as seen on the Pulsar NS 200 with a large analogue tachometer and it also gets a gear shift light. Switch gear quality is likeable but I don’t like the turn indicator switch which has a spongy button in the middle to cancel out the lights. Overall build quality along with fit and finish levels are impressive. 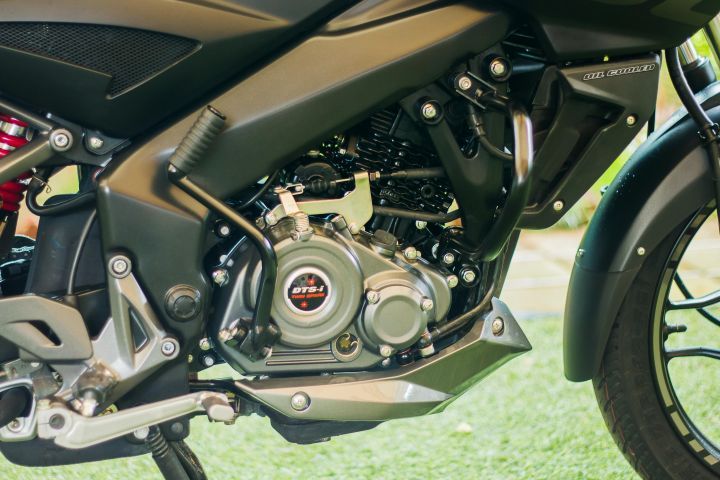 The highlight of the Pulsar NS 160 has to be the new 160cc motor. The 160.3cc motor is based on the 150cc engine that did duty on the now discontinued Bajaj Pulsar AS 150. Talking about numbers, the Pulsar NS 160’s engine develops 15.5PS at 8,500rpm and 14.6Nm at 6,500rpm, which is a drop of 1.5PS in comparison to the AS 150’s mill but torque has risen by 1.6Nm. According to Bajaj officials, the engine wasn’t stressed much to improve refinement and make it more frugal. We only got to ride the bike for under an hour and one thing we can confirm is that the performance of the bike is likeable. 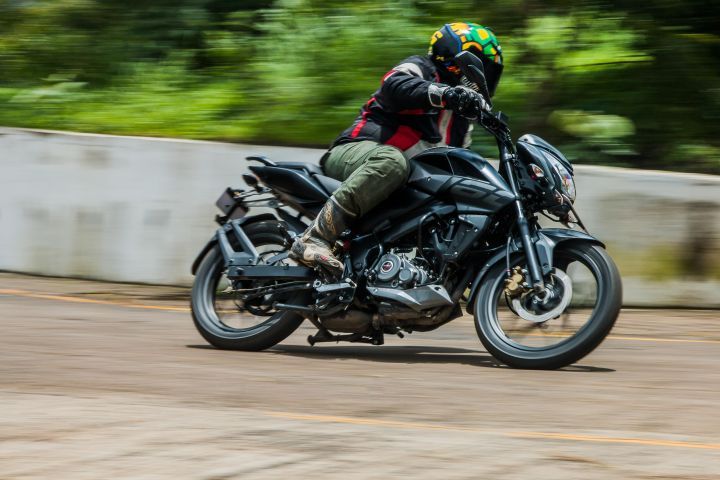 It picks momentum swiftly and feels eager while offering a linear power delivery. Going by my gut feeling it does feel fast accelerating to 60kmph, maybe the fastest, but we will have to test the bike to verify my claim. While the engine delivers performance, what it lacks is refinement. Vibes kick-in post 4,000rpm and get severe till 7,000rpm post which they subdue a bit. The engine also sounded gruff at higher speeds which is a bit surprising as the AS 150 motor felt quieter and more refined. Cruising speed is around 90kmph with vibrations for company that can be felt from the tank and handlebars. The gear ratios are well spread out, with the shorter first and second gear to extract the low-end grunt while riding in city. 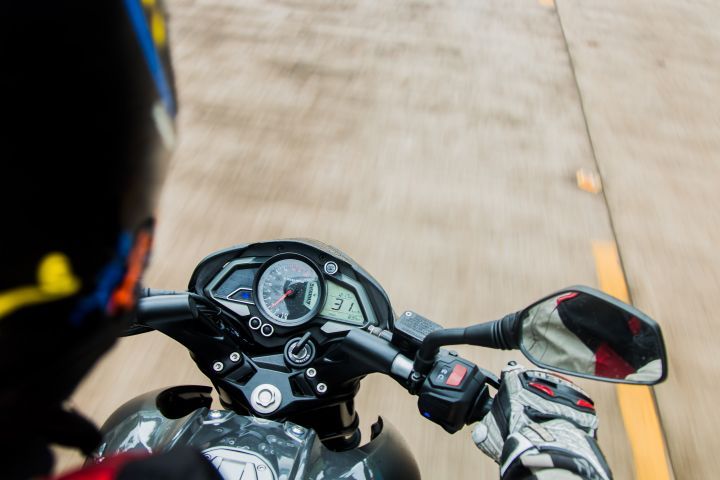 Clutch action is light which made the bike easy to ride in the mild traffic that I encountered on my short ride. The new Pulsar NS160 does deliver on the excitement front but we would have liked a more refined motor on the lines of the Suzuki Gixxer and the Yamaha FZS-Fi. Bajaj haven’t claimed any mileage figures but we expect it to be around 45-50kmpl which is the standard in the class. 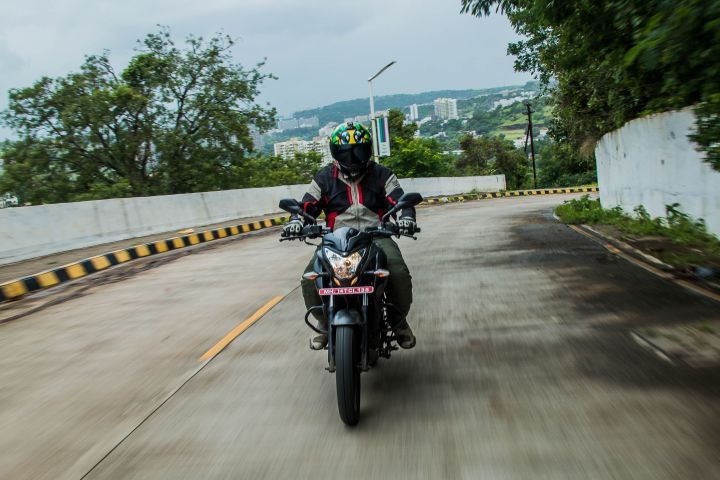 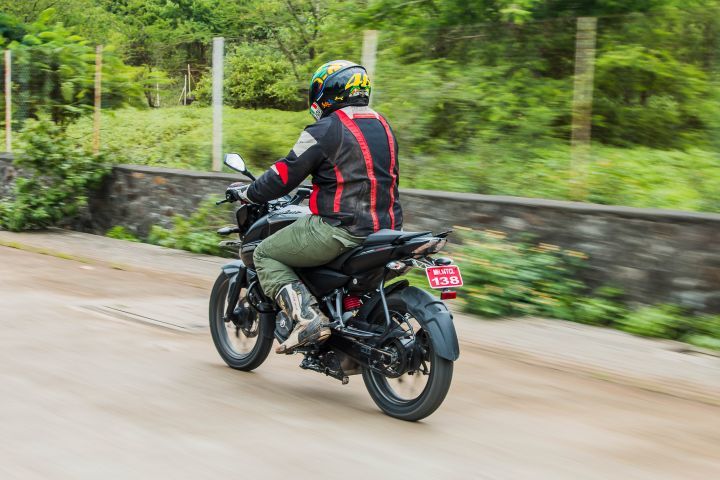 The riding position is similar to the Pulsar NS 200 with clip-on handle bars and marginally rear-set footpegs which results in a slightly sporty but comfortable riding posture. The large fuel tank also gives you a feeling that you are aboard a much more powerful machine. The 805mm saddle height is significantly higher than its rivals, while I didn’t face any problems (I’m 5 feet 10 inches tall) shorter riders might find it a bit daunting. The perimeter frame has been carried forward from the Pulsar NS 200 which out shines the more traditional diamond type frame as seen on its rivals. 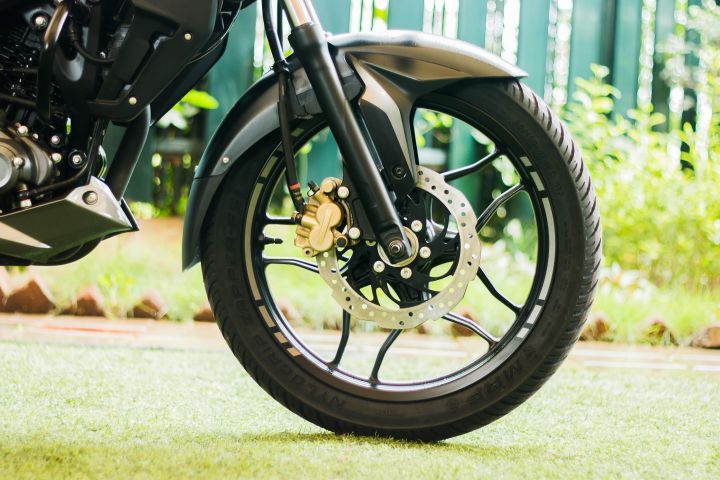 But unlike its rivals who wear fat 90 section front tyre and 140 section rear tyres, the new Pulsar gets 80 section rubber at front and relatively slimmer 110 section rear, great for mileage but aesthetically it loses points to its rivals. I was a bit sceptical on whether the skinny tyre will be able to do justice to the perimeter frame and gladly it did. 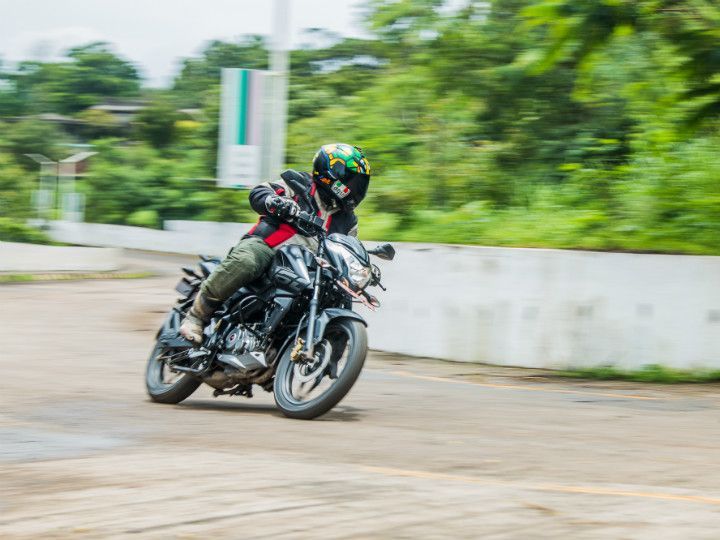 Admittedly, I didn’t push the bike hard around corners on the rain soaked tarmac but the handling of the Pulsar NS 160 is predictable and not for one moment did the bike feel twitchy. Unlike the Pulsar NS 200 which feels front heavy, its younger sibling felt nimble on its feet and very easy to manoeuvre. The one aspect of the Pulsar NS 160 that really impressed me is its brilliant ride quality. Given the onslaught of monsoons, road surfaces aren’t in great shape and the bike rode over undulations and potholes without breaking a sweat. 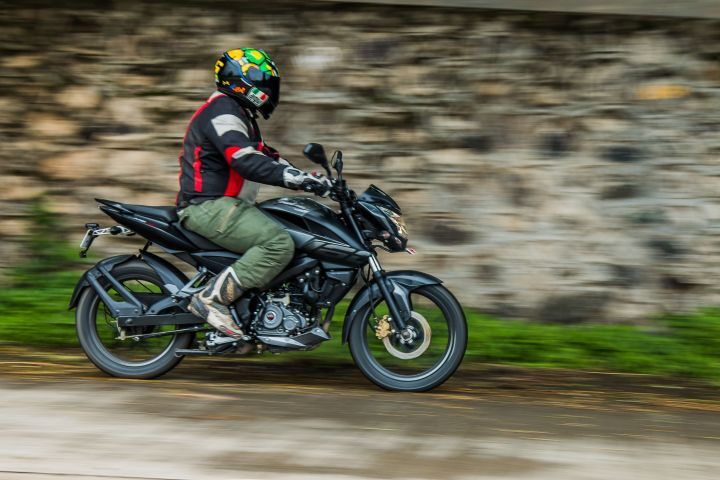 The 170mm ground clearance is also the best in the segment and given the crater type potholes that are offered to us bikers every monsoon, it is a boon. Stopping power is provided by disc brake at front and a drum at the rear.The brakes provide good bite and shed speeds with a very progressive nature, though, I would have preferred a bit more feel through the lever and rear disc could have been offered as an optional extra.
Verdict:

The Bajaj Pulsar NS 160 is a well-rounded product and feels like the rightful heir to the Bajaj Pulsar. The aggressive styling will surely pull youngsters who want their machines to stand out from the crowd while the Rs 78,363 (ex-showroom, Delhi) price tag means that it will make a smaller dent in their parents pocket who are most likely to fund this acquisition. 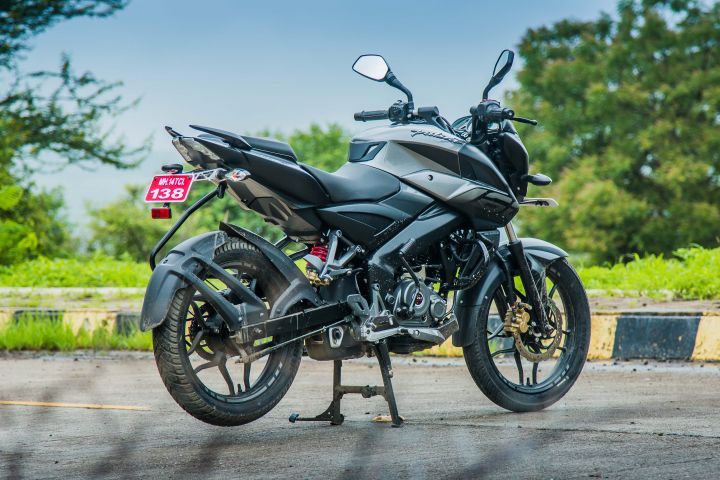 Engine vibes are its achilles heel while reliability in the longer run remains questionable but as a motorcycle, the Bajaj Pulsar NS 160 ticks all the right boxes. The 150-160cc space is witnessing a lot of action and the new Pulsar looks set to make its mark in this segment and its rivals (Suzuki Gixxer, Yamaha FZ Fi and Honda CB Hornet 160R) should be worried. To replicate the success of the Bajaj Pulsar 150 is a rather uphill task, whether the new Pulsar NS 160 gets lucky or fades out like the Pulsar AS 150 is something only time will answer.

What is the price of Bajaj Pulsar NS160?

Does the Bajaj Pulsar NS160 have ABS?

What is the EMI of Bajaj Pulsar NS160 in Delhi?

What are the colours available in Bajaj Pulsar NS160?