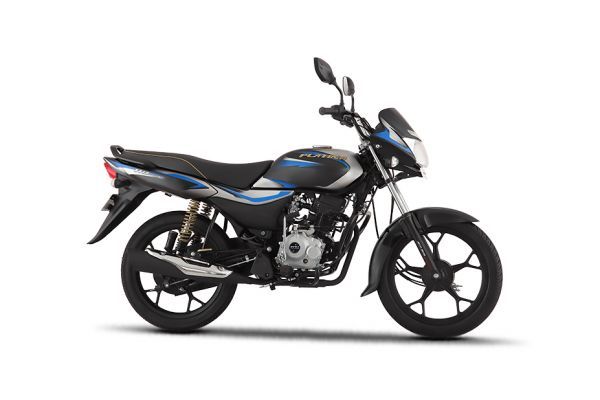 Bajaj Platina 110 is a commuter bike launched at a base price of Rs. 50,899 in September 2012 by Bajaj in India. Platina 110 is powered by 115cc engine claiming mileage of 80kmpl. Platina 110 has a single cyl, 2-valve, dts-i with exhaustec engine and a 4 speed gear box. Bajaj Platina 110 comes with drum breaks in front and rear. It is available in 2 colours.

Like the majority of Bajaj’s lineup, the Platina too has been updated for 2019. Priced at Rs 49,300 (ex-showroom, Pune), it’s essentially a new variant which features combined braking system (CBS) and a slightly larger 110cc motor from the Discover. In terms of styling, the Platina 110 gets new sporty graphics which helps differentiate it from the 100cc variant. Additionally, the seat gets golden coloured piping which matches the suspension colour and adds a touch of premiumness. The Platina also gets LED DRLs positioned right above the headlamp.

The new Bajaj Platina has the potential to become the company's bread-and-butter bike by making a mark in the massive entry-level commuter motorcycle market of India.

The Bajaj Platina 110 is a no-frills commuter motorcycle from the Pune-based bikemaker which focuses on a balance of efficiency and comfort. For better ride quality, the motorcycle comes with telescopic forks up front and a pair of Nitrox rear shock absorbers with dual springs in each unit at the rear. It also comes with a small footboard for the pillion instead of conventional footpegs. Brakes include a 130mm drum up front and 110mm drum at the rear, with combined braking system as standard. Power comes from a Discover 110-derived 115cc single-cylinder air-cooled engine which churns out 8.6PS at 7000rpm and 9.81Nm at 5000rpm. Working in conjunction with a 4-speed transmission, the motorcycle returns an ARAI-certified efficiency of 80kmpl. Its top speed stands at 90kmph. The Bajaj Platina 110 is priced at Rs 50,752 (ex-showroom Delhi). It competes with the Honda CD 110 Dream DX, Hero Passion Pro 110 and Yamaha Saluto RX.

The Bajaj Platina 110 is powered by a 115cc single-cylinder 2-valve air-cooled DTS-i engine. It produces 8.6PS of power at 7000rpm and 9.81Nm of torque at 5000rpm. This, coupled with a 4-speed transmission allows the motorcycle to reach a claimed top speed of 90kmph. The claimed ARAI-certified fuel efficiency figure stands at 80kmpl. Bajaj has built the Platina 110 using a tubular semi-double cradle frame linked to telescopic forks up front. At the rear, the bike features dual gas-charged spring-over-spring shock absorbers. 130mm front and 110mm rear drum brakes bring the motorcycle to a halt. Bajaj offers CBS as standard to comply with the new safety norms.

The design of the Bajaj Platina 110 is pretty much like any other commuter. It sports a bikini fairing with LED DRLs just above the headlamp. The fuel tank and the side panels have a no-nonsense, slim design highlighting functionality over form. Bajaj has equipped the motorcycle with a retro-looking analogue instrument cluster which shows the speed, odometer, fuel gauge and tell-tale lights. The trip meter has been given a miss, though. In a bid to enhance pillion comfort, the rear footpegs have been replaced with flatter footboards.

While we haven’t ridden the Bajaj Platina 110 CBS, we did get a chance to test a version of the exact same motor on the Discover 110. Though the engine isn’t the torquiest in its segment, it felt tractable and refined. Furthermore, the inclusion of CBS, new graphics, a bigger motor and a nifty little footrest designed for children have made the bike all the more appealing. Not to mention, a price tag of Rs 49,300 (ex-showroom, Pune) places it bang in between its competitors.