The new Bajaj Platina has the potential to become the company's bread-and-butter bike by making a mark in the massive entry-level commuter motorcycle market of India. 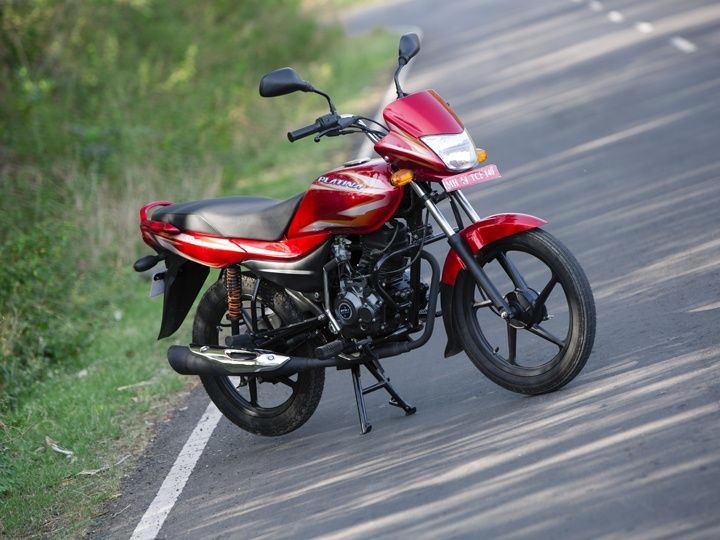 It's always exciting to ride a motorcycle for the very first time, even if it's a humble commuter like the Bajaj Platina ES. The Bajaj competes in a highly competitive market where the margins are low and the game is based on volume... which currently the Hero Splendor and Passion, and Honda CD 110 Drean and Dream Neo dominate. With dwindling sales motorcycle numbers and no scooter model for rescue (Honda Activa was the largest selling two-wheeler in March 2015) Bajaj is again focusing at the bottom of the pyramid to strengthen its foothold in the market.

After having refreshed the Bajaj Discover range of premium commuters and the sportier Bajaj Pulsar series, the modest Bajaj Platina gets a much needed upgrade - which Bajaj now calls the Bajaj Platina ES. And here she is in my parking lot looking its best in this bright red colour scheme.

It's a long and sleek motorcycle, not too tall and without the artificial bulk which has become a norm in other motorcycle segments. And though the new Bajaj Platina ES looks very similar to the older model, Bajaj has redesigned quite a few body parts.

Take for example the solid front fairing, which has replaced the older, visor equipped cowl, and the happy face headlight. The streamlined fuel tank is narrow and flat, and is not as curvaceous as on bigger bikes. Similarly the seat doesn't have much contour and is pretty long. These along with the forward position of the foot pegs and tall handle bar create an upright, commuter friendly riding position. Wonder why Bajaj didn't think of using clear-lens indicators, instead of these old-school orange ones?

Almost the entire rear panels have been redesigned and which give the Bajaj Platina ES a more muscular form and appeal. While the pillion grab-rails, engine, chassis, rear brake and gear levers along with the exhaust employ an all-black theme, overall, the Bajaj Platina ES hasn't been designed to wow customers. Nobody is expected to put up a Platina posters in the bedrooms, but it's a decent looking bike, with more features now and is expected to ferry people to their destination expeditiously... which it does.

So, the name Bajaj Platina ES is an acronym for - Electric Start, a convenient feature the older bike lacked. It now also gets a maintenance free battery, hinged fuel filler car and improved seat cover material. You also get rubber on the rear brake pedal and on the toe and heal of the gear-shifter, which will be handy during rains by offering better grip.

The twin pod, chrome rimmed instrument cluster is still old school with an analog speedometer and fuel gauge read outs. The grips are soft touch, but as in the segment do not sport bar-end weight to fend vibration, nor come with an engine kill switch. The buttons and switches are on par to competition and it also comes with a door-bell type headlight pass switch, instead of the usual trigger button.

Overall, there is nothing path breaking here, as the new Bajaj Playina ES is on par to competition and sits right in the middle of the segment.

I hop on to the bike. Time to use the 'ES' and wake up the neighbourhood. After a couple of failed attempts and some more closer looking around I discovered the choke tucked under the fuel tank on the carburettor. Could have been more conveniently positioned. With the chokes prodding the Bajaj Platina ES comes alive and placidly idles, as I adjust the large and useful rear view mirrors.

It runs a newly developed 102cc single cylinder, 2-valve, DTS-I which is based on the Bajaj Discover engine, chucking the 99cc motor found on the regular Platina. Though the new motor develops similar 8.2PS of peak power at 7,500rpm, it's torque has been marginally improved to 8.6NM at 5,000rpm. The idea behind the new engine isn't just to improve the fuel efficiency but to make the bike more rideable and peppy.

Time to taste the pudding, as I shift down to first gear, and keep shifting down to shift-up as the Bajaj Platina ES gains momentum. The four-speed gearbox shifts in an all-down pattern, which not just takes time getting used to (being the opposite of usual gearbox action) but if you're new to this setup you'll be unconsciously gear-locking till you get familiar.

A tip to get over this quickly is to change the left foot position slightly, keeping your heel off the gear shifter and only bring it back when you want to shed speed and 'shift down'. I found the the clutch action to be light and easy but it could have a more progressive release action.

The new 102cc motor feels spirited for its puny size, and is quick to reach the 60kmph mark where it's most comfortable. So, overtaking within the city should be a breeze. And there's ample torque to carry the Bajaj Platina ES from city crawling speeds to beyond 80kmph on the highway, but then it starts to protest and sends shudders through the footrest. The exhaust note is nice for a 100cc bike and has that typical Bajaj texture to it.

It's only while cutting through traffic, and even more so riding on the curvy mountain roads, does one realise the work put in to improve the new Bajaj Platina ES' riding dynamics. Bajaj has tweaked the chassis and the box-section swingarm to make the ES more rigid and nimble compared to the last generation bike.

The Platina is light to steer and at the same time does not twitch and twist like the older bike, when ridden hard on the hills. While the short turning radius and light weight of just 108kg make it a naturally apt for the city. The only grouch is that the riding position is way too commuter-ish and dull, as you don't have much groove in the 11.5-litre fuel tank to sink your knees in, nor is the seat carved out to provide a snug posture. The counter argument of 'consumer demand' is also not valid here, specially if you look at more ergonomically sound offerings like the Honda Dream series and TVS Star City Plus. Clearly the market and consumers have also evolved.

Ride quality is on par to competition, though as the well cushioned seat along with the telescopic front forks and dual-spring rear shock absorbers make for a comfortable ride over most sections of road. With two average built adults on board, the suspension doesn't bottom out nor is it too firm for comfort.

The 17-inch wheels come wrapped with decent Ceat tyres (ribbed 2.75 x 17 in front and 3.00 x 17 at the back) which do a fair job of keeping the bike connect to the tarmac. However, the 110mm drum brakes are just about average, since the front brakes feel spongy and one has to depend on the rear brakes to come a halt urgently.

The new Bajaj Platina ES costs Rs 45,431 (ex-showroom, Mumbai) and is a clear improvement over its forebearer - offering the ease of a self-start, a peppier engine, better tyres and vastly improved handling. And like all Bajaj bikes it will be easy and affordable to run and maintain.

Claiming an ARAI certified 96.9kmpl, Bajaj terms the Platina ES as the 'world's mileage champion', a title soon clinched by Hero's Splendor iSmart. However, we managed to squeeze out 85kmpl riding the Bajaj Platina ES very cautiously on the highway and it dropped a couple of kilometres to a litre in the city when ridden with a light hand.

But since the motor is now tuned to sense the throttle input faster and deliver the desired power quickly it forces the fuel efficiency figure to drop considerably, bringing it closer to the 70kmpl mark. Still the Bajaj Platina ES remains one of the most fuel efficient motorcycles available in the country today.