Is the Aprilia SXR 160 the sporty maxi-scooter we have been waiting for? 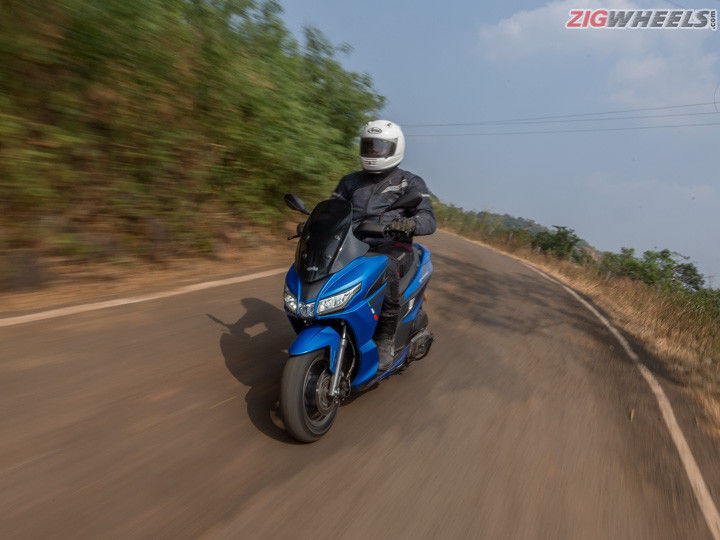 Catch me if you can! This bold statement was stuck on the rear of the Kinetic Blaze (based on an Italjet), India’s first maxi-scooter. The Blaze had performance that could humble many entry-level performance bikes at that time. However, it was way ahead of its time and the Indian market never really warmed up to it, resulting in a short stay.

Many years down the line another Italian brand wants to try its luck in this segment, and Aprilia has ridden in the new SXR 160. That said, Aprilia isn’t calling it a maxi-scooter, but has coined the term ‘cross-max’ for it. Ever since the SXR 160 was unveiled at the 2020 Auto Expo, it has created quite a buzz, but the main question is: does it live up to the hype?

Being Italian and the fact that it's a product from Aprilia, one thing that the SXR 160 has in abundance is visual appeal. No matter where we went during the shoot, it was the centre of attention with its sporty styling--and the cool matte blue shade on our media unit also helped. It features sleek split LED headlights and DRLs that have been inspired from the Aprilia RS 660 and they look stunning. I also liked the manner in which the turn indicators have been integrated into the headlight. Adding to its presence is the large apron and the tall smoked windscreen. Even the subtle graphics add a nice touch to the overall styling.

The SXR 160 isn't an all-new scooter and is based on the SR160. So while it has great presence at the front, the rear looks a bit underwhelming and tiny. This also makes it look a bit disproportionate from the rear and in profile. However, I must add that the sharp split LED taillight and the large grab handle do look impressive.

Other impressive bits are the fit and quality levels of the scooter. I particularly liked the Y-shaped alloy wheels with their beautiful anodised finish and the same treatment is seen on the telescopic fork as well. The panel gaps are tight for the most part while the flush-fit footpegs and side stand are neat touches.

The SXR 160 also features a large LCD digital display that’s well laid out despite a tonne of information on offer. You get data such as average fuel consumption, range, overall fuel efficiency, ambient temperature, max speed clocked, two tripmeters, tachometer, engine oil temperature, battery voltage and more! A useful addition is the mode button which allows you to switch through the various information on the move.

One of the main reasons for the popularity of a maxi-scooter is the space it offers. There’s a glovebox below the handlebar with two separate compartments. On the left hand side you get a USB charger but the space in the compartments isn’t too big. It’s the same story with the underseat storage. Since fuel tank capacity has been increased by a litre (7-litres capacity) and the battery box is now positioned alongside the fuel tank, underseat storage seems to be similar to the Aprilia SR 160, which as you know is very poor.

My other grouse is the fact that you don’t get an external fuel filler cap and there’s no multi-function keyhole to access the seat. So one needs to open the seat in the traditional manual way. The other basic misses are an engine kill switch and brake lock.

Powering the bike is the SR160-sourced air-cooled single-cylinder motor producing 11PS at 7,100rpm and 11Nm at 5,750rpm. Aprilia claims that they have revised the gearing a bit for better bottom-end performance as the SXR 160 is 11kg heavier than the SR 160. It offers good acceleration and feels sprightly until 60kmph, post which the performance tapers marginally. The highlight for me was the refinement offered by the engine as even at speeds above 90kmph you could hardly feel any vibrations.

During our ride we could manage a speedo-indicated 99kmph max speed, and to verify if the speedometer isn’t overly optimistic like the Aprilia SR 150, we checked the GPS speed, which showed 98kmph. High speed stability is also great till 90kmph, but after that even the slightest road imperfections cause the handlebar to start shaking owing to the stiff front suspension.

The other problem I faced with the scooter is the lack of space and size when you get aboard. A maxi-scooter’s front end should dominate the rider’s vision, but on the SXR 160, it feels that there is nothing in front of you as the handlebar and instrument console is placed low, away from the rider’s field of view. Even the footboard space is cramped and with my size 11 riding boots, I had no space left.

There’s also a flexi-foot peg--basically an upward angling of the footboard to place your feet in a relaxed manner. But for me to use them comfortably, I had to sit on the rear seat (I am 5ft 10). Then there’s the seat: Aprilia claims it’s the longest in the segment, and there’s ample space for the rider and pillion. But the seat cushioning is hard, which coupled with the hard suspension makes for a very uncomfortable combination.

The SR DNA also makes its presence felt in the handling department. Unlike the SR 160 that gets 14-inch wheels, the SXR 160 runs on smaller 12-inch wheels. The steering isn’t as swift or reactive as the SR 160, something that suits the character of the scooter and would be appreciated by mature riders. Having said that, it still remains fun to ride around corners and feels very stable around fast sweepers. Despite the 11kg weight gain, the SXR 160 managed to hustle through traffic and the extra weight isn’t very prominent.

However, the SR DNA also comes with a big negative and that's stiff ride quality. Aprilia claims that although the suspension components are same, the springs are different--and it does offer a noticeably better ride than the SR 160. But the SR 160 hasn’t set any benchmarks for ride quality and the marginal improvement has more to do with the 12-inch wheels in my opinion.

You have to be extra careful in avoiding potholes and ride gently over bad roads. The ride quality is absolutely jarring on broken roads and the rider feels every undulation and jolt through the handlebar and the seat. Comfort is a very important aspect for any maxi-scooter and with its suspension setup, the SXR 160 is easily amongst the most uncomfortable scooters that I have ever ridden.

Moving on to the braking performance, the SXR 160 features a disc/drum brake setup. The bite from the disc brake is good, but I would have preferred more feel through the lever. It’s among the few scooters in India to feature ABS and the single-channel unit isn’t too intrusive.

So, is the Aprilia SXR 160 a sensible scooter? The simple answer is no. Having said that, if you’re in the market for a sporty, premium and ‘hatke’ scooter, the SXR 160 could be the one to pick. Aprilia hasn’t announced pricing for the SXR 160 yet, but we expect it to carry a premium of around Rs 20,000 to 25,000 over the Aprilia SR 160 priced at Rs 1.03 lakh. As you can figure, the SXR 160 will be among the most expensive scooters on sale and given its performance and features, we don’t think it justifies the premium pricing.

Even if we keep the price aspect aside, the Aprilia SXR 160 misses out on the basic ethos of a maxi-scooter, which is comfort and space! So if you’re in the market for a maxi-style scooter, our suggestion will be to opt for the Suzuki Burgman Street as it offers more space, comfort and fuel efficiency while being significantly more affordable.