The Aerox 155 is the fastest scooter that we have tested, but does it make sense for India? 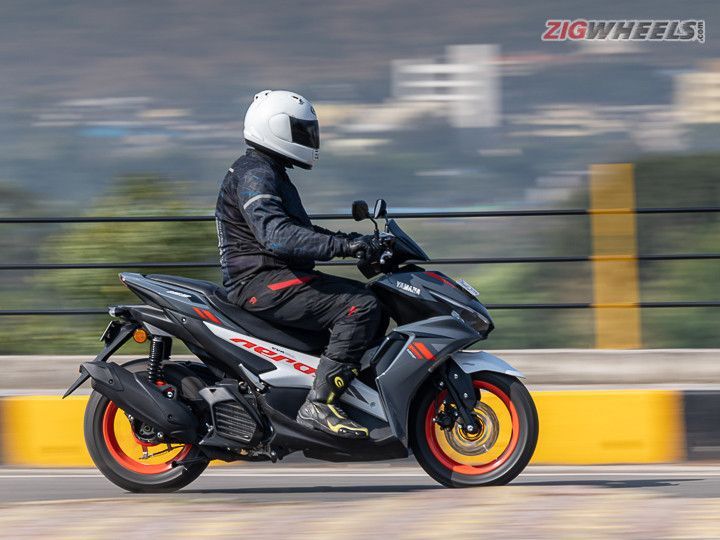 Performance, it’s a word that gets us two-wheeler enthusiasts excited and why not: It’s one of the key reasons for us to connect with our rides! Performance is something that’s easily accessible in the current two-wheeler space, but that wasn’t the case many years back. One brand, however, always stood out and that’s Yamaha. From the absolutely bonkers Yamaha RD350 in the 80s, to the awesome Yamaha RX100 and later the YZF-R15, the Japanese giant has always given us something extra.

But when it comes to scooters, performance is an alien concept even today, with only a handful of options, and Yamaha wants to change that with the Yamaha Aerox 155. It’s the fastest, sportiest and the most expensive made in India scooter on sale, but does it have the Yamaha DNA and can it spawn a new revolution?

If I had to describe the Aerox' performance in three words, it would be fast, effortless and refined!

Given its power and torque advantage, it isn’t particularly quick off the line and that shows in our acceleration test till 40kmph. Once you hit the strong mid-range, though, the Aerox feels alive and gathers momentum at a brisk pace. As you can see, the difference in acceleration times is significant when compared to the Aprilia SXR160, and it’s clearly the quickest scooter that we have tested.

This strong mid-range is courtesy the VVA (Variable Valve Actuation) technology and it is not only helpful in the city, but also when overtaking on the highway. At speeds where most scooters run out of breath, the Aerox 155 keeps on pulling strong and you can do speeds above 100kmph easily. In fact, we even saw a speedo-indicated 120kmph on one of our runs.

And it’s just not the ease with which it does triple-digit speeds, but the solid composure it displays that's even more impressive. Refinement is also great, although you do feel a minor buzz on the footboard, but that’s negligible.

While performance is impressive, does it come at the cost of fuel efficiency? You can see our tested figures below. The numbers are impressive but were achieved at sane speeds. If you have a heavy right wrist, the numbers will drop to around 30-35kmpl. The Aerox also gets start/stop tech to improve its fuel efficiency, and it’s a simple and effective system.

It’s just not performance where the Aerox 155 smashes it, but also styling. In pictures the Aerox looked petite, but it's a fairly large scooter and is imposing to look at. The lines of the scooter are sharp, sporty and sculpted. The contoured seat and the spine give it a low-slung stance.

It features a large fascia that’s dominated with a sharp split LED headlight and the DRLs look aggressive. I really liked how the front turn indicators have been integrated into the edge of the apron. While the styling is busy, all the panels flow seamlessly with the overall design.

The X-Shaped panel on the spine is also a neat touch and the Aerox graphic is sporty. While the face is aggressive, the tail section is compact and minimal. I loved the simplistic LED taillight that looks modern and premium. While the radiator shroud looks cool, the air-box cover looks odd and sticks out like a sore thumb.

Fit and finish is good, the switchgear quality is among the best and the tight panel gaps are a sign of its premiumness. However, the fuel filler flap is flimsy and the shut lines are so bad that you can see the fuel filler cap from the side.

The Aerox 155 is an attention magnet and looks like nothing else on Indian roads. So if you want to make an impression and want exclusivity, look no further!

The sporty Yamaha scooter gets an all-digital negative LCD instrument console. It’s packed with information that can be toggled through easily on the move via a mode button. The layout is clean but the twin rev counter is pointless.

The multi-function key slot is very useful and there’s a switch next to it to access the underseat storage and the fuel cap. While the brake levers look premium, oddly there is no brake lock.

Via the Y-connect app you can also monitor various parameters of the scooter on your phone, and the Bluetooth connectivity means you get call and message alerts on the console. Sadly there is no navigation feature, which is a big miss. The Aerox also features a silent starter motor generator and a side stand engine cut-off which is a very useful safety feature.

Owing to the spine, you have to swing your leg around the seat like you do on a motorcycle to get on the Aerox 155. The spine also means that footboard space is so less that you start appreciating the carpet area of flats in Mumbai. Apart from the lack of space, the spine also does feel odd initially, but you do get used to it. In fact, I was later hugging the spine with my legs similar to how one holds the fuel tank of a bike with their thighs.

The riding posture is upright and feels like that of a motorcycle. Since the handlebar is tall, it didn’t foul with my leg while taking u-turns. My main issue with the scooter, however, was that my knee was brushing against the apron and it can get very irritating. Also, the rider sits very close to the handlebar and the instrument console doesn’t fall into the rider's field of vision. Additionally, the mirrors are terrible, with form taking precedence over function.

The seat padding is firm, which is something I prefer, but at 790mm, the seat is quite tall as well. Besides, the Aerox 155 is bulky at 126kg, and requires some muscle while parking.

On the practicality front, the Yamaha Aerox has a generous underseat storage space of 24.5 litres that can be accessed via a switch next to the multi-function key. I was pleasantly surprised that it could accommodate a full-face Arai helmet, something no other India-manufactured scooter has managed so far.

One caveat is that you need to put your helmet upside down! And you’ll need a cloth underneath to prevent the top of your helmet from getting scratched. It also gets an external fuel-filler cap for added convenience and there’s even a small apron-mounted cubby hole with a USB charger, albeit as an optional extra. The spine also omits conventional footboard space and gladly one can’t carry a gas cylinder on this scooter.

Performance is epic, styling is sporty and the handling is stupendous by scooter standards! It doesn’t have that nervous tipsiness one usually gets with a scooter, and in that sense, the handling feel reminds you of a motorcycle.

And one of the key reasons for this is the motorcycle-like riding posture, and that you can lean easily into corners with confidence. Additionally, the massive 140-section rear tyre ensures that you never run out of grip. So whether you’re on mountain twisties or even a go-kart track, you will have loads of fun. And the fun element continues in the city, as direction changes are swift and you can hustle it through traffic.

The brilliant handling dynamics, though, come at a cost and that’s comfort! The ride quality is harsh, not firm, not stiff, harsh! It does get slightly better, if you’re a hefty rider like me or have a pillion.

The ride isn’t bad just on broken roads, potholes or speed breakers, but even the undulations on concrete roads will unsettle this scooter. There is a solution, though, as Yamaha offers an optional adjustable rear suspension for a whopping Rs 17,000! . However, the front suspension cannot be adjusted.

The firm ride quality is also the main culprit that stops the Aerox from being a good tourer, as our highways have a Karan-Arjun-like bond with potholes. So even though the riding stance is comfortable, the harsh ride will take a toll on your back.

The braking performance of the Aerox is mediocre at best. You do get a disc brake and single-channel ABS, but the bite from the disc brake is lacking and one has to really go hard on the lever to get any kind of decent stopping power.

The brake feel is also low and even with ABS, the front does lock a bit under hard braking. Given the performance of the Aerox 155, strong brakes are a must and Yamaha should work on this.

At Rs 1.29 lakh, the Yamaha Aerox 155 is the most expensive scooter manufactured in India. The Aerox isn’t a practical scooter and clearly doesn’t offer great value. What it offers in abundance, however, is uniqueness, excitement and fun! Yamaha could have taken the easier way out with the NMax, but they chose to go bold and offered us something distinct and youthful.

The best compliment for the Aerox 155 is that it feels and rides like a motorcycle and not a scooter! And yes, it does rev your heart and has the Yamaha performance DNA. But one big problem with performance is that most parents don’t like that word. So if you’re a young enthusiast who has been unsuccessful in convincing your parents to get you a KTM RC 200 or even the R15, convincing them to buy a scooter would be easy, right?