To make the SR 160 more relevant, the Italian brand gives it a refresh 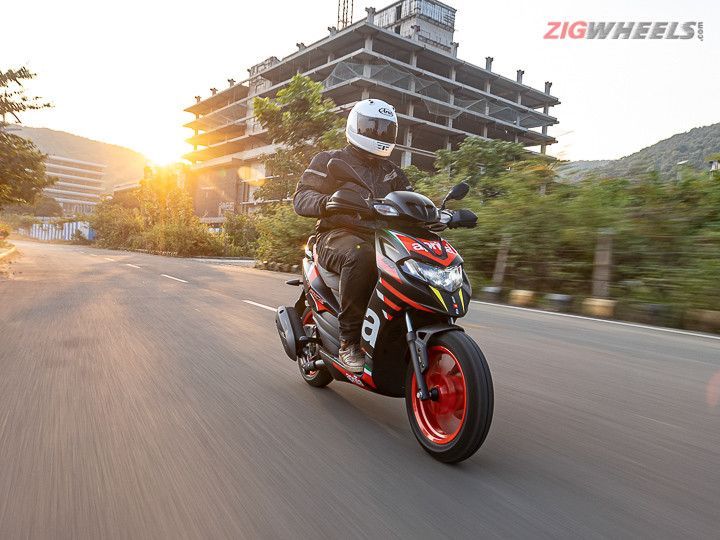 Be A Racer! Now that's a very bold statement especially on a scooter but then again the brand in question is Aprilia, one that's renowned globally for its range of performance bikes. Besides, a certain Valentino Rossi also won his first GP championship astride an Aprilia, so that seals its racing credentials as well.

Aprilia made a smashing entry in the Indian market with the SR 150. It was unlike any other scooter on sale and youngsters were enthralled! However, it was long overdue for an update and has finally received one. So have these updates made it better?

The most obvious change is the styling. Aprilia designers haven't gone radical, and made subtle changes to make it look fresh and modern. The apron is raked out and gets a lot of creases to make it look sporty. The other big change is the inclusion of an LED headlight and DRLs which makes the SR 160 look more modern. While the seat is still a single-piece unit, it gets a spine to make it look like a split seat. It also gets a faux carbon fibre finish on the mudguard, exhaust shield and handlebar. The 2021 Aprilia SR 160 also gets a redesigned taillight, and the X-shaped LED unit is quite unique.

However, the turn indicators are still bulb units. The grab rail has also been redesigned and is bulkier. The graphics, too, have been overhauled and the Race Edition which we rode sported graphics inspired by the Aprilia MotoGP bike. Other unique bits on the Race Edition include a dual-tone finish on the seat and knuckle guards, though they seem pointless in my opinion. Fit and finish levels are good, but the switchgear quality is poor for a scooter with this sticker price. Despite the subtle updates, the 2021 SR 160 manages to stand out and distinguish itself from its predecessor.

The other big change on the 2021 Aprilia SR 160 is on the features end. It now gets an all-digital instrument console as seen on the Aprilia SXR 160, but it gets an orange backlight. The instrument console is loaded with information which can be toggled on the move via a mode button. It displays details such as real-time fuel efficiency, average fuel efficiency, range, top speed recorded and even ambient temperature. The layout is clean and it’s easy to read, but the tachometer is pointless on a scooter in our opinion.

Customers can also add a Bluetooth module for Rs 2,000 for call and message alerts. Just like the Yamaha Aerox 155, the SR 160 also misses out on turn-by-turn navigation. A lot of their competitors now offer this and it’s a shame that Aprilia has chosen not to. Underseat storage space remains unchanged, and it’s still not great to be honest. But the sporty scooter now features an underseat light and USB charger as standard. However, it still doesn’t get a multi-function keyhole and the fuel filler cap isn’t an external unit, which would have added convenience.

The updates have been limited to the cosmetic and features end, mechanically the new SR 160 remains identical to its predecessor. Talking about performance, the Race Edition has a slightly retuned CVT for better acceleration compared to other variants. It still isn’t very quick off the line but once you cross 30kmph, the scooter feels lively and accelerates strongly till 75-80kmph. Post that, though the SR 160 does keep going towards triple-digit speeds, you will need patience. Refinement levels of the motor have improved, but you do feel a buzz on the footboard at speeds above 80kmph.

The rider’s triangle is the same as the older scooter, and the tall handlebar means that your leg doesn't foul with it while taking U-turns. The new seat padding is too hard and we feel a slightly softer padding will increase seating comfort. Footboard space is the same as before, and it’s adequate at best. The underpinnings are also unchanged, and the SR 160 still remains fun around corners.

The 14-inch wheels endow the scooter with a lot of stability and allow you to carry a lot of speed around bends with confidence. On top of that, its agility is impressive too. One aspect that impressed us is the ride quality, which has improved a lot. The SR 160’s ride is still firm, but it isn’t stiff as its predecessor or harsh like the Aerox 155. Braking performance is adequate, though we would have preferred more bite, and the single-channel ABS means that the rear does step out under hard braking.

The updates on the new Aprilia SR 160 have come at a price, as it’s around Rs 11,000 more expensive than the older scooter. And given the kind of updates it has received, the jump in pricing isn’t justified as the SR 160 was already priced at a premium. Having said that, the Aprilia SR 160 still remains a fun and enjoyable scooter. But we feel that the Italian marque should have added more oomph to improve its performance, especially given the presence of the Yamaha Aerox 155 in the Indian market now. What makes matters worse for the SR 160 is that the Race Edition is priced just Rs 1,000 lower than the Yamaha scooter and on paper at least, the Aerox makes more sense. Whether the same translates in the real world is something we shall be finding out soon.