Spy shots reveal interesting bits about both the bikes 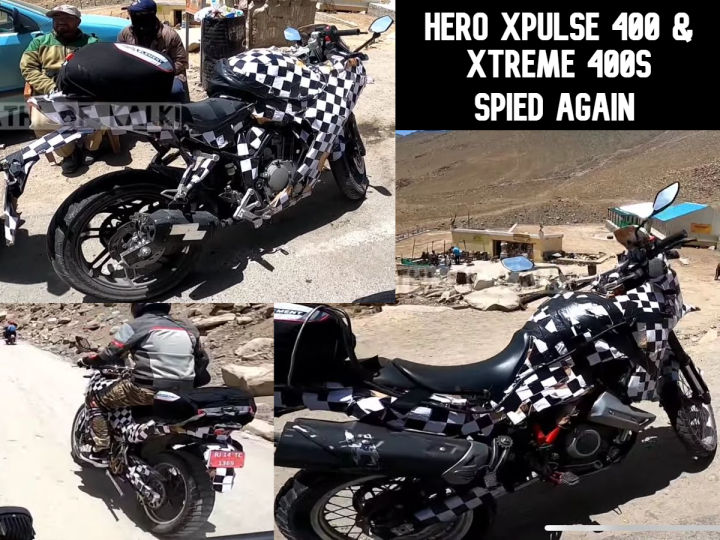 Multiple test mules of both the Hero XPulse 400 and Xtreme 400S were spotted on test in Ladakh by YouTuber Sarathi of Kalki. These are the same test mules that were spotted earlier this week, however, this time we have a clearer look at both the bikes.

The XPulse 400 test mule presents itself to be rather tall, however it does have a slim seat, which should make it easier for riders to ground their feet. The quarter fairing, coupled with a small beak up front give us an idea that this bigger and more potent XPulse is likely an ADV and not a dual-sport bike, like the XPulse 200 4V.

The test mule packs a 300-400cc, single-cylinder, liquid-cooled heart likely to produce around 40-45PS, and features a large fuel tank, with an expected capacity of over 15 litres. Further complimenting its touring-friendly nature is suspension setup which comprises a long-travel upside down fork and monoshock, as well as front and rear petal rotors. We expect this bike to be running a 21-inch front and 18-inch rear spoke wheel, shod with dual-purpose tyres.

While the test mule features a fully digital display, you can also expect features like Bluetooth connectivity, USB charging, switchable ABS and fully adjustable suspension, most of which are already offered with the XPulse 200. There might also be features like traction control and cornering ABS, as the test mule was seen with a four-way switch cube on the left side switchgear.

The Xtreme 400S presents itself to be a rather imposing figure like a typical supersport. Playing along the lines of the erstwhile Hero Karizma ZMR, this upcoming sportbike packs a muscular look, and will likely grab a lot of eyeballs.

Expect it to also be powered by the same 300cc-400cc engine as the XPulse 400, albeit in a sportier state of tune. The test mule sports a telescopic fork and monoshock, which should allow Hero to price it competitively. Braking duties are shared by front petal disc with an axial caliper and rear petal disc. We think dual channel ABS should come as standard.

Completing the supersport look are alloy wheels and clip-on handlebars. It’ll probably get electronic rider aids like traction control and cornering ABS as the switchcube does reveal four-way control buttons for what will likely be a fairly comprehensive menu system in the instrument cluster.