How does the flagship Royal Enfield fare against the sporty baby Harley on paper? 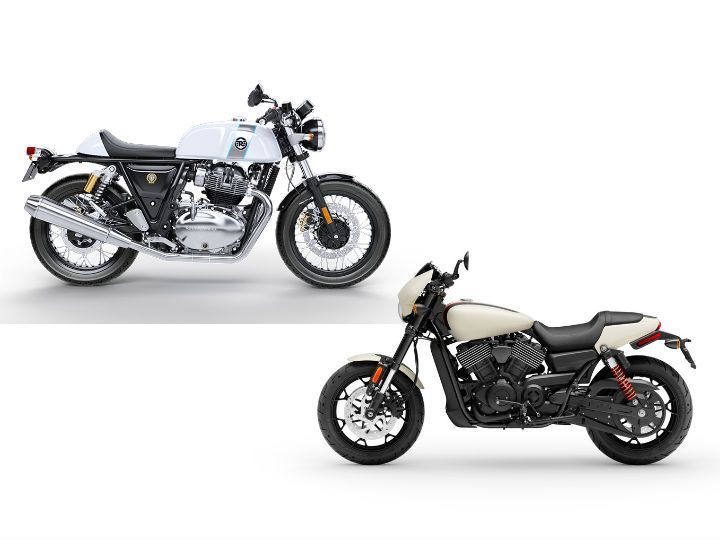 The 650 twins marked Royal Enfield’s entry into the big-bike segment. The Royal Enfield Continental GT 650, in particular, is the brand’s most expensive product. One of the primary rivals it competes against is the Harley-Davidson Street Rod, the sporty variant of the most affordable Harley in the country, the Street 750. Here’s how they stack up against each other on paper:

However, out on the highway, the Street Rod’s lazy rake angle coupled with the 112mm longer wheelbase makes it more stable at higher speeds. Theoretically, a lazier rake angle may not make the bike corner-happy. However, to compensate for this, Harley has shortened the trail by 6mm to improve agility.

But if you’re on the shorter side, Harley’s low seat height will work in your favour. It makes manoeuvring the bike on feet a lot easier as well. Interestingly, the Street Rod’s massive 205mm ground clearance is one of the highest among big bikes.

However, the V-twin layout makes the engine dimensionally larger and there is a tendency for the cylinder head on the inner side to heat up your thighs. Also, with a compression ratio of 12.0:1, the engine runs considerably hotter and is more stressed than the Continental GT. Royal Enfield's 650 parallel-twin layout makes the engine a lot more compact and with a compression ratio of 9.5:1, it doesn’t run as stressed out as Harley’s engine. Also, the Royal Enfield gets the advantage of slip-assist clutch which makes the lever action lighter and also prevents the rear wheel from hopping while downshifting aggressively.

The Street Rod comes with the more sophisticated suspension, thanks to the presence of inverted front fork. An inverted fork results in less unsprung weight compared to a traditional unit. But more importantly, the Street Rod gets much more potent brakes. You get one extra disc up front compared to the Continental GT 650 and even at the rear, the Harley’s disc is as big as the front unit!

The Pirelli Phantom Sportscomp on the Continental GT 650 is meant for relatively relaxed riding whereas the MRF Revz tyres on the Street Rod are stickier and the radial layout makes the sidewalls stiffer too. This results in greater cornering confidence.

At Rs 2.65 lakh, the Royal Enfield Continental GT 650 offers staggering value for money for the kind of performance it offers. On the other hand, the Harley-Davidson Street Rod is considerably more expensive, at Rs 6.53 lakh, both prices ex-showroom Delhi. Overall, both bikes cater to two different kinds of riders and they offer two distinct riding experiences. So there really isn’t one clear winner in this case.