Here’s how the supersports fare against each other on paper 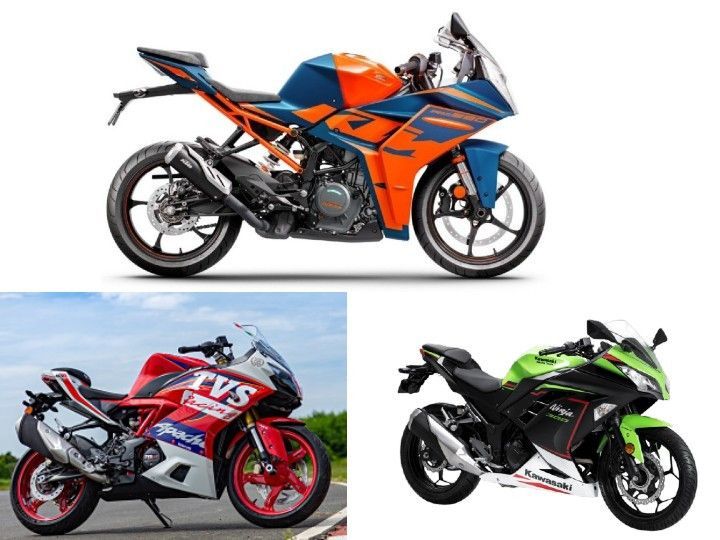 KTM has finally launched the 2022 RC 390 in India with a revised design, fresh colours and updated electronics, however, it does command a steep premium over the previous model. But how does the India-spec RC 390 fare against its supersport rivals, the TVS Apache RR 310 BTO and Kawasaki Ninja 300, in terms of specs?

The latest iteration of the KTM RC 390 makes the same power figures as its predecessor, but 1Nm more torque. However, this shouldn’t make for big a jump in the performance. That said, KTM has managed to shed some weight on the supersport which should offer a better power to weight ratio as compared to the previous model and its rivals that produce less power and torque, and are also around 20kg heavier.

That leads us to conclude, at least on paper, that the KTM RC 390 takes the win in the performance department with the largest displacement engine and highest power and torque figures of the three.

It is also noteworthy that the Kawasaki Ninja 300 is the only twin-cylinder engine, and should be more refined than the other two supersports.

Both the RC 390 and the Apache RR 310 BTO come equipped with a similar USD fork up front, however, the RR 310 gets full adjustability on the dynamic kit, making it more flexible on the racetrack, city limits and touring, whereas the India-spec RC 390 make makes do with a non-adjustable fork. On the other hand, the Ninja 300 gets a telescopic fork up front. All three bikes feature a similar adjustable rear suspension setup, with the RR 310 BTO flaunting 20-step rebound damping and a 10-step preload adjuster.

With the biggest front disc and a radial calliper, the RC 390 clearly features better braking hardware. The Ninja 300, however, gets a twin-piston calliper on not just the front, but on the rear brake rotor as well.

With the highest ground clearance, the RR 310 would make for the most practical and comfortable bike on the harsh Indian roads. However, with a seat height of 780mm, the Ninja 300 would be more accessible for riders of all heights. Making the Ninja 300 a better touring bike is its massive 17-litre fuel tank, which will be useful on long journeys by minimising fuel stops. In this regard, the RC 390 lags a little behind, but makes up for it by being a lighter, agile and more flickable motorcycle. So it should be more fun in the corners.

Talking about features, the Kawasaki Ninja 300 seems outdated as it misses out on a lot of modern day tech like a fully digital instrument cluster with smartphone connectivity and LED headlights, which its rivals flaunt.

In terms of tech the RC 390 comes fully packed with traction control and lean-sensitive ABS, Supermoto mode (switches off rear ABS) and a quickshifter. The RR 310 on the other hand, packs four riding modes (Sport, Track, Rain and Urban), which adjust power and throttle response settings and slipper clutch too. While the Ninja 300 does pack just a slip and assist clutch as well, it still remains the least feature and tech packed bike of the lot.

With a highly competitive price point, the TVS Apache RR 310 is a completely feature-packed supersport that offers incredible performance and makes for a really attractive package. The 2022 KTM RC 390, although a highly capable and enjoyable motorcycle, commands a really steep premium over its predecessor and we really don’t think KTM has done enough to justify the increase. On the same note, the Kawasaki Ninja 300, is the most expensive bike here with a massive price tag and the least features and tech on offer, which might not make it a very attractive package.