RE’s new twin-cylinder platform works really well in its Interceptor guise. But what about when you convert it into a cafe racer? 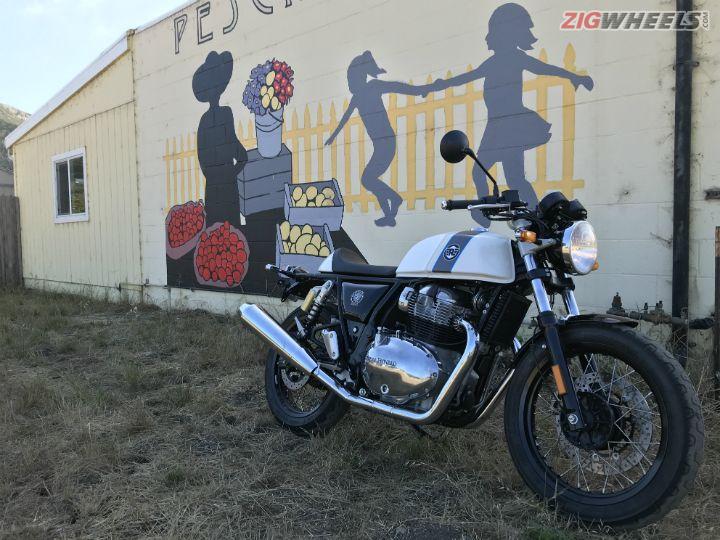 It’s amazing how much difference a change in riding position can make to how a motorcycle feels. And that’s exactly the mantra of the new Royal Enfield Continental GT 650. Now, in terms of mechanicals, it shares everything with the Interceptor 650 - same engine in the exact same state of tune, same frame and even the same suspension setup. So if you want to know about the exact underpinnings of these motorcycles, do check out our full first ride review of the Interceptor 650 here.

It’s very clear that this Continental GT 650’s design borrows a lot from that of the now-discontinued Continental GT 535. And in fact, at a quick glance, you might even be hard pressed to tell the two apart. But difference in engine aside, the 650’s tank, even though it bears a similar shape, has now been shortened in length compared to the 535’s. It’s also taller now, which gives the GT 650 a slightly more muscular look. And at 12.5 litres, it holds 1.2 litres less than the Interceptor’s more bulbous tank. Even the clip-on handlebars now mount directly to the fork pipes, rather than to the top of the yolk as on the 535.

Aside from the tank and handlebars though, the Continental GT carries over pretty much all the design components from the Interceptor. The headlight is the same halogen unit, it gets the same rectangular indicators, the twin-pod instrument cluster is unchanged and the switchgear is no different either. And the 18-inch wire spoke wheels are the same too. Of course, both bikes run differently shaped seats, though our test bike here was running the optional “Touring” single seat setup with the integrated cowl - the stock seat is a long, 2-person unit. One small difference to note between the Interceptor and GT is the little heel plate that’s mounted behind the GT’s rear-set footpegs, which is missing on its sibling.

The difference in stance

Since the GT 650’s tank has been shortened (as compared to the GT 535), the seat has now been pulled closer towards the handlebars. And even the clip-ons are actually raised, so the overall handlebar position is taller than that of the 535. So when compared to the single-cylinder Continental, the reach to the handlebars isn’t as much, nor are you leaning as much over the front. But just like the 535, your knees will almost never be able to grip the tank recesses, and if you’re average sized, more often than not, your knees will be touching the fins on the cylinder head - hence the small heat shield over there.

But while the posture might feel more relaxed than that on the 535, this GT 650’s riding position is significantly sportier than that of the Interceptor. In that sense, it remains true to its cafe racer heritage. If you’re not accustomed to riding proper sportbikes, it’s very easy for the GT to take a toll on your back and wrists, especially when riding in slow moving traffic. But show it some corners, and things change drastically.

Even though the GT’s chassis and suspension components (and the same 24 degrees of rake) are the same as the Interceptor’s, thanks to more weight over the handlebars, the front-end feel is significantly better. This allows for higher precision when chucking the bike from corner to corner. And at 198kg without fuel, the GT is lighter than the Interceptor too (with the kerb weight estimate being 205.5kg), making it feel quite agile. And while the Interceptor’s wider handlebars do give you better leverage while steering, the GT had almost none of the front-end weaving at high speeds that the Interceptor had.

The bottom line is that this sportier posture simply begs you to push harder and harder, and here’s where you might encounter the limitations of the suspension. The GT’s front end feels more reactive to sharp mid-corner bumps than the Interceptor’s does, and the bouncy rear suspension can be a bit of a concern if you encounter really sharp bumps when carrying high lean angles through the corners.

Between the Interceptor 650 and the Continental GT 650, there’s absolutely no difference in tune in RE’s new 648cc, air- and-oil-cooled parallel twin motor. So you get the same 47 PS @ 7250rpm and 52 Nm @ 5250rpm. But since the GT is a few kilos lighter, we expect that it’ll accelerate a bit quicker. But in our riding experience, the difference wasn’t noticeable. What was noticeable, though, was the how easy the crouched-over posture made reaching that magic “ton”. With considerable ease in tucking in, wind blast was significantly lesser, and more often than not, we found ourselves crossing the 100mph (160kmph) mark blasting down the Pacific Coast Highway. In fact, a few times we even saw 180kmph on the speedo, and the GT felt fairly stable at this speed too.

Personally, after spending two days riding the Continental GT 650 and Interceptor 650 back to back, over the same Californian roads, I can unequivocally say that I enjoyed the cafe racer much more. The GT’s sporty riding position makes it much more suitable for twisty mountain roads and even high speed straight line blasts. To top things off, the new twin-cylinder motor finally provides the performance and refinement that the 535 simply couldn’t.

Based on the US prices that Royal Enfield announced for their two new twins, the GT does command a premium over the Interceptor, but at 200 USD, it isn’t all that much. So although we’re certain that more buyers in India would prefer the versatility and comfort that the Interceptor offers, for outright thrills, the GT is our choice of the two for sure.