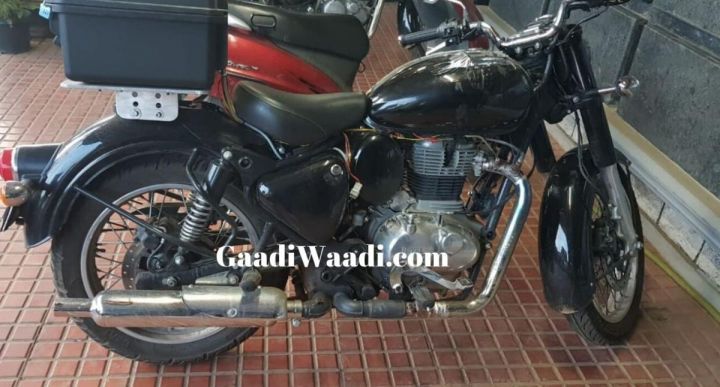 A clear spy shot of the 2020 Royal Enfield Classic 350 Fi has emerged online for the first time. And the oxygen sensors seen on the exhaust this time around, confirm the addition of fuel injection. Unlike the bike spotted earlier, this fuel-injected version seems to have a different exhaust routing too.

The exhaust pipe from the engine leads into a catalytic converter, and then from there, the end pipe has a familiar short bottle-like shape. It is evident that Royal Enfield is still testing the motorcycle for emissions as you can see a number of wires connecting the engine and test equipment at the rear. As far as the launch details are concerned, we expect Royal Enfield to launch the motorcycle early next year.

The motorcycle comes with an all-new engine and the head looks larger than the existing 346cc unit. Expect the engine to displace between 350-400cc. Interestingly, the gearbox casing also looks similar to the one in the 650 twins, which suggests that the bike might feature a 6-speed transmission. This, coupled with the new engine should make the bike reasonably highway-worthy.

The new Classic 350 also gets a new instrument cluster and new retro-looking switchgear. Royal Enfield has also replaced the sprung rider’s seat with a conventional one. Up front, the telescopic fork remains the same as the outgoing bike, but instead of twin rear gas-charged shock absorbers, the bike gets traditional units. Brakes include discs on both ends with dual-channel ABS as standard.

We believe Royal Enfield will offer both carburetted and fuel-injected variants of the motorcycle in question. Expect the bike to command a premium of around Rs 10,000 to Rs 15,000 over the existing Classic 350, which retails at Rs 1.53 lakh (ex-showroom Delhi). It will go up against the standard Jawa, Jawa Forty Two, 2019 Bajaj Dominar 400 and the soon-to-be-launched Mahindra Mojo 300 ABS.